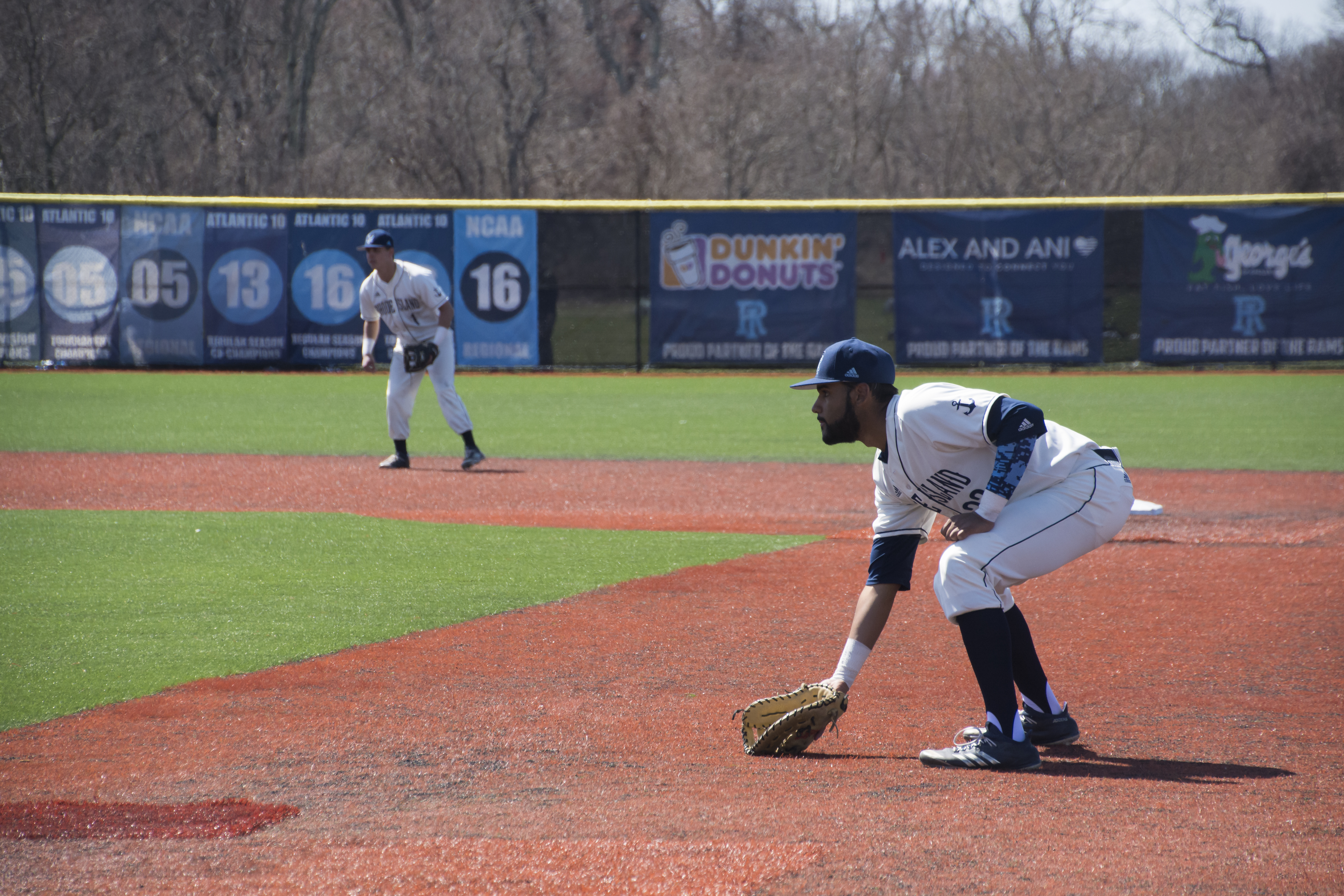 Baseball took the season opener but lost the next two in their opening series against Rice this past weekend. Photo by Autumn Walter.

Rhode Island Baseball started their 2019 campaign off on the right foot this past weekend, winning their season opener against the Rice Owls.

The Rams were unable to win the series against Rice though, losing their next two games to start the season 1-2. In the first game, URI was down one going into the top of the ninth inning, but a double by catcher Sonny Ulliana brought pinch runner Max Mircovich into and tie the game at one. The Rams were able to take the lead in the top of the 10th as Infielder Kevin Heiss was able to score off a wild Rice throw. Tyler Wilson started the game for Rhode Island, going five frames, allowing three hits, one run and striking out five.

The Rams bullpen did an excellent job in this game, with a combined five innings between Mark Silvestri, Jake Walker and Cam LaFleur. Walker pitched two innings and was credited with the win, and LaFleur pitched the final frame for URI, setting the Owls down in order to record his third save of his career.

“They were outstanding,” said Coach Raphael Cerrato on his bullpen. “They got us out of big jams, closed up the game on Friday, they were really, really good. It gave us an opportunity to win both of the first two games. It was really encouraging.”

In the second game of both the season and series, nine innings was not enough to crown a winner, as this time Rice was able to win in 13 innings, 7-6. The Owls at one point had a four run advantage, scoring the first four runs of the contest. The Rams were able to crawl back with the help of a three-run sixth inning.

Down 5-3 in the top of the ninth, the Rams needed late game heroics once again and were able to get some, this time by way of a Sonny Ulliana sacrifice fly to make it 5-4, then game tying single by Xavier Vargas forced extra innings once again. URI took the lead in the top of the13th, but it was short lived as two Rice runs came in the bottom of the frame by way of an error and passed ball, which allowed Rice to walk off as 7-6 winners.

Vitaly Jangols got the start for Rhode Island, going four and two-thirds innings, allowing six hits, four earned runs and striking out three. The Rams bullpen was once again called upon to pitch big innings in this game, and did well again, with six different pitchers throwing in the next seven and two-thirds innings. The bullpen did only allow one earned run in this span, but did allow two unearned runs in the 13th which allowed Rice to take home the win.

In the rubbermatch game of the series, Rice was able to take home the win in a contest that wasn’t close, winning 15-3 over URI. Rice scored their first seven runs in the first three innings of the game, putting the contest out of reach right away. The Owls pushed across three runs in the first, then two in the second and third. Rice pushed six runs across the plate in the bottom of the fifth, to make the game 13-0. Rhode Island was unable to score until the top of the eighth, where a Billy Butler sacrifice fly plated Sam Ilario to make it 15-1. URI added two more runs in the top of the ninth to make it a 15-3 loss.

“Game three they just honestly kicked our butts,” said Cerrato. “Pitching had a couple of tough innings on the mound. It was tough to come back after two extra inning games, being on the road, and traveling around Texas. Overall I take a lot of positives.”

Rhody now looks forward to this upcoming weekend, as they have a date with the University of Missouri in Fort Myers, Florida, at the City of Palms Park.