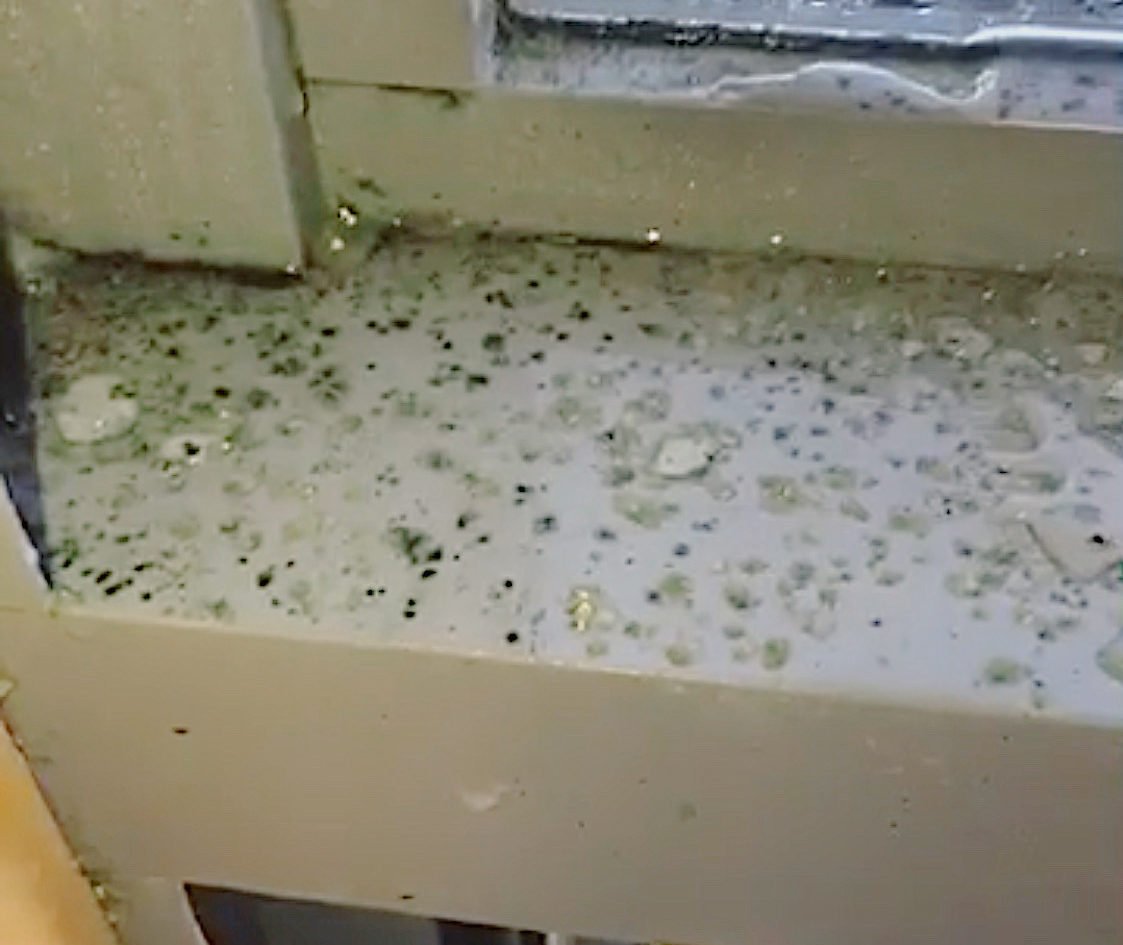 by Theresa Brown and Mary Lind

The growth of mold in multiple dormitories across the University of Rhode Island has left students with an unclear picture of what the administration’s protocol is to fix the situation.

The process of cleaning the mold in dorms is relatively simple, according to Jeffrey Plouffe, associate director of housing and residential life (HRL) and Frankie Minor, director of HRL.

If the problem is simple enough to be dealt with without bleach, housekeeping staff will take care of it with fungicide. Minor explained that most of these situations can be dealt with in this manner. Minor noted that except for a few exceptions either one outside treatment or treatments from their staff have been enough to handle the situations. For those that can’t, outside companies are called in.

“We call in the outside company, they come in and treat it,” said Minor. “This is what they’re paid to do.”

The turnaround time for mold to be removed from a room varies depending on whether or not a housekeeping staff member can clean the mold or if an outside company will have to be brought in. However, both are supposed to be relatively short.

“If it’s a situation where our staff can come in and clean it, treat it and treat it with a fungicide, we can do that the same day,” said Minor. “It may be a day or so, but [outside contractors] do respond pretty quickly, and the treatment itself doesn’t take that long.”

Freshman students Megan Arnold and Natalie Pantelopoulos said that their turnaround for getting rid of the mold in their room in Barlow Hall was prolonged. According to Pantelopoulos, after checking on the mold the day after they had reported it to their resident advisor, HRL did not come back to clean it for 10 days.

“A week and a half goes by, and they still haven’t come back yet,” Pantelopoulos said. “So we told a different RA, we were just really annoyed with it.”

Arnold said that when HRL finally sent someone from housing to clean the mold, it was determined that they would need a professional to handle it. Two days later they were moved to another room so that the mold could be treated.

“An actual team came and they cleaned,” Arnold said. “They moved all of the furniture, we had to leave for the whole day.”

Trying to avoid the mold, Pantelopoulos and Arnold said that in the time it took the mold to be removed they tried not to be in their dorm because they didn’t want to sit around it.

Freshman Danielle Spano had a similar experience in her room in Hillside Hall. She said the problem began when condensation formed on her window. Spano said that the day after she told her RA about the mold, HRL found it growing on the top of their window and the ceiling. Spano and her two roommates were moved to a different room.

“[The mold] was so gross,” Spano said. “It was green, and it was everywhere.”

According to Spano, when moved to a different room, she was told that it would be three to four weeks before they were back in their original dorm. HRL told them it was unclear what the issue was.

“They told us they were going to take out the window, but they never took out the window,” Spano said. “Instead they just put sealant because they still don’t really know the problem, they said.”

Spano said that she reported the mold before winter break so she was surprised that it was still an issue when she got back.

“They didn’t do any [work] on it over break, and I thought that was weird because we had asked them to,” Spano said.

HRL is aware that mold is an issue in many buildings on campus, not just in dormitories but academic buildings as well. Plouffe cited a major reason for the high prevalence of mold at URI is due to the University’s close proximity to the ocean.

“We have a lot of moisture in the air, and there are really three fungi that tend to grow here that is mold,” Plouffe said. “They’re in a group called myxomycetes, and we have presidio spores, aspergillus, and penicillium.”

These molds are not pathogenic, according to Plouffe, meaning that they are not necessarily bad for you, although some people do have allergies to these molds.

While students were unsure of whether their sickness was related to the mold or just their environmental allergies at the time, Health Services is ______ whatever they are doing.
“I realize that a lot of people have a real concern when they see mold,” said Plouffe.

Plouffe said that this is why HRL has been working on the issue since the summer, when it began to get humid.

“We put dehumidifiers in the buildings, we’ve been renting some very large dehumidifiers,” he said. “And so by the time we got to move-in, the buildings were in pretty good shape. We had a little bit of visible mold at that point and we brought either Serve Pro, or some of the other, we call them disaster recovery [teams].”

On move-in weekend, they had a one of these teams on hand.

“If someone moved into a room and it was a room that, while it was clean, mold somehow grew…we were prepared to respond even on move-in weekend,” said Plouffe.

By handling the mold over the summer and on move-in weekend, Minor said that they were able to stay ahead of the situation so that it wouldn’t reach a point where students would have to be relocated while mold was being taken care of.

“Many schools wait too long,” he said. “This is not unique to this institution. You just have to do a quick Google search and Indiana University [and] University of Maryland, have shut down entire residence halls. For ours, it’s been episodic into a room or sometimes a couple of adjoining rooms.”

The University has a “master price agreement,” according to Plouffe, for “disaster recovery teams.” That agreement comprises about fifteen different companies that are used on a rotating basis when incidents arise.

“This year was an unusual year because of what happened down south, a lot of the disaster recovery companies went down south to do business there because of the hurricane,” he said. “We only had a small group of companies to select from, but they’re all very good companies. They come as soon as we call.”