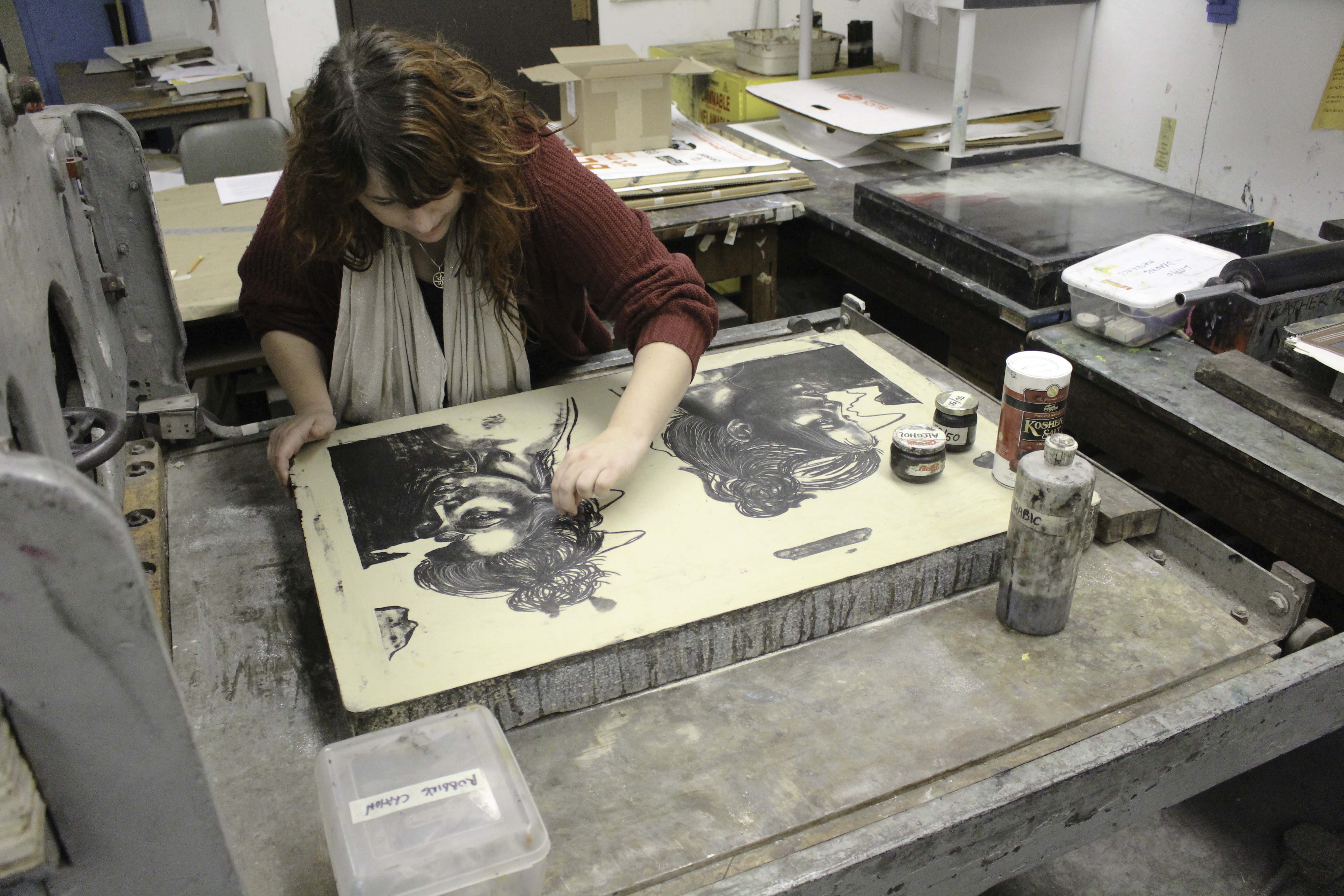 Alessandra Antonelli works on one of her art pieces for the senior seminar show. Photo by James McIntosh.

Alessandra Antonelli, a senior student at the University of Rhode Island, is working on a series of large lithographs and monoprints for URI’s senior seminar show which will take place at the beginning of May.

Lithography and monoprinting are physical methods of printing. Lithography, a form of monoprinting, uses a large stone or metal plate and prints from the immiscibility of oil and water. Monoprinting uses etching, woodcutting, or lithography and can only be done once for each print which allows for an original piece each time. Both monoprinting and lithography requires the artist’s strength to physically etch and roll the large plate onto what the print will end up on and the end product is always unique based upon the acid, oil, water, and ink’s chemistry, making it a unique art form.

Displaying depictions of socio-economic, social injustice and self-awareness through a series of five prints, Antonelli hopes to evoke a visceral connection between her artwork and audiences.

Antonelli said that she has always enjoyed conceptual works and has mainly focused on producing conceptual art in her studio work, which has helped her focus on being very self-aware.

“I really wanted to dive into something I was passionate about which is focusing on knowing the self and the different layers of what that means,” Antonelli said. “Everyone that looks at it is going to get something different out of it and hopefully it will get a new level of something that’s personal to them of self-awareness.”

To help audiences connect through her work, Antonelli is using a variety of imagery and portraiture to illustrate her thesis.

“It is easier for people to connect, especially through the eyes of other portraitures, and I think it makes it more human and gives us a level we can grab onto,” Antonelli said. “I do use some surrealist imagery in some of my work so it can be harder to grab onto it but I think grounding it with a realistic figure helps.”

Antonelli chose to depict her thesis through printmaking, monoprints and lithographs due to the laborious nature of the art the physical connection between herself, the artistic piece and the topics at hand.

“Printmaking is very laborious and very physical and I think that’s something that was important to me to picking it as a printmaker but also for my subject matter because I really wanted to depict the self struggle and the struggle of others and the levels of injustice through hard works,” Antonelli said. “I think that being connected through the pieces through it being very physical in nature of making the piece. It’s a lot of hard work and sweat that goes into it.”

Along with the actual process of printmaking being very physically tolling, it is also very time consuming and, in Antonelli’s personal opinion, is more difficult that drawing or painting.

“You never know what’s going to come out through the press but I think that’s the beauty of it too,” Antonelli said.

Antonelli has been working on her five pieces since January, but has been conceptualizing, sketching and making a timeline for her work since the summer.

Antonelli said that she is inspired by Käthy Kollwitz, a German expressionist who is well known for her woodblock prints and focuses on the German class division, social conflict, and socio-economic divide of class and the suffrage of women.

She said that Kollwitz speaks to her on a level and inspires her, showing her where she would like to be in the future with her ability to express and evoke similar emotions through her artwork.

“Art definitely transcends the language barriers so it’s relatable to everybody,” Antonelli siad.

All seniors who receive a B.F.A. must contribute to the senior seminar show, although any junior or senior is able to contribute.

“It’s a good opportunity to get a cohesive body of work ready for graduate school or portfolios if you want to go into the arts,” Antonelli said.

Students work independently from each other but have a series of critiques as a class throughout the semester. After experimenting sophomore and junior year with various media, students spend a semester focusing on a cohesive project.

Students initiate their own projects and participate in critical exchanges with each other, participating faculty, and visiting artists. After they have finished, students exhibit their artwork in an installation which will take place in the Hera Gallery in South Kingstown, Rhode Island, lasting for a month after the end of URI’s spring semester.