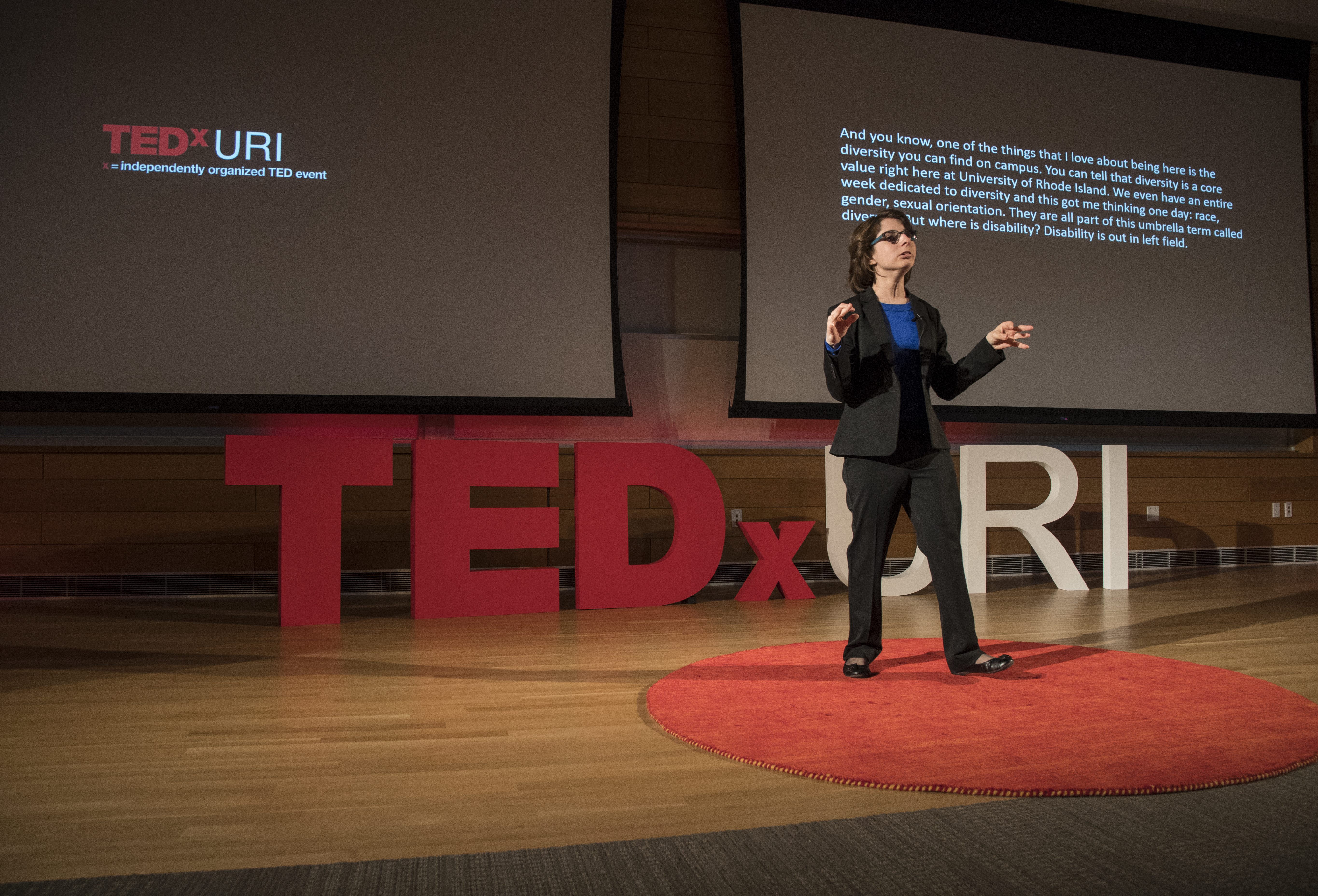 by Theresa Brown and Kayla Michaud

“The impulse to act is the catalyst for positive change,” media technologist Benjamin Leveillee said during his TEDx Talk, “The Impulse to Act in the Information Age.”

The University of Rhode Island hosted its second annual TEDx Talks, focusing on a main theme of change, this past Saturday, Feb. 23.

With topics ranging from climate change to indigenous peoples to working with autistic individuals, eight speakers brought their ideas to “change it up” to an audience of over 200.

Senior health studies major Rachel Ferreira’s talk, “The Diversity Within,” really resonated with the audience, gaining her a standing ovation.

The talk was centered around living with a disability and about how Ferreira has changed her mindset to view it as a “diff-ability,” something that makes her differently-abled but not unable.

“My name is Rachel Ferreira and my diff-ability does not limit me, but rather inspires who I am and what I have to offer the world,” she said.

Ferreira explained that throughout her life she has experienced many hardships, which she deemed rainstorms. However, she’s remained positive because she knows that there will always be a rainbow at the end of the rainstorm.

“She is truly our community rainbow,” Host Paul Loberti said.

Another talk, titled “Representation Matters: Latinx in the Mainstream Media,” was given by a URI alumna, Raquèl Pèrez.

Pèrez emphasized the importance of diversity of characters in films, television shows and books. She focused on the misrepresentation of her culture through stereotypes, but was positive that this is something that can be changed. Pèrez said her dad raised her living by a phrase “garra charrùa,” which means tenacity and courage in the face of adversity.

“We are so quick to place people in boxes,” Pèrez said. “It’s not about what we look like like, it is what we have inside, the stories we have to share.”

A father of a URI student, Pete Hunt gave a talk titled “A Striver’s Guide to Accepting Change.” Hunt centered his talk around his last moments with his father who was diagnosed with a terminal illness. He highlighted the lessons he learned about patience and being grateful for what you have even if it isn’t favorable at the time.

Hunt said that in his father’s final days he spent his time in a sunny spot on the front porch of Hunt’s sister’s house eating coffee ice cream and listening to audiobooks. Even after he lost his sight he stayed proud of what he had accomplished and experienced during his life, and what he still had.

Another speaker was high school junior, Isabella Robinson who was encouraged to audition for the TedX Talks by her teacher. Robinson shared her first-hand experience witnessing police brutality as well as the assumption and stereotypes placed on people of color. She urged the audience to use their voices on social to demand change.

“With social media we can share and demand action and justice,” Robinson said.

Junior URI student and past TEDxURI speaker, Erik Schlicht helped some of the speakers with their talks, assisting the speech coaches. He said the difference and power of the Tedx Talks was what made the day.

“The whole thing was great,” Schlicht said. “I got to work with the speakers, they did a great job. The diversity of stage today was what really stood out.”