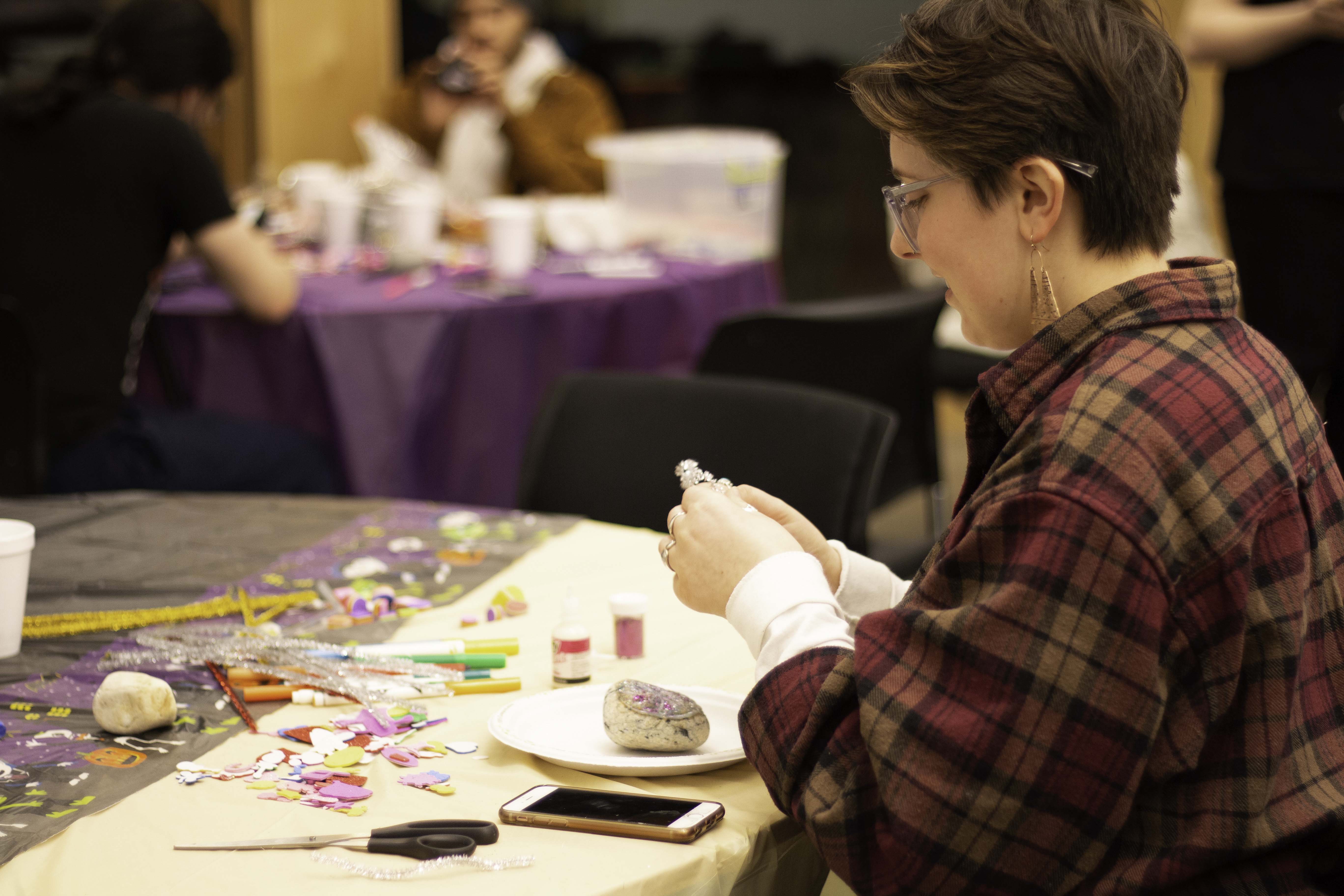 Student Arden Bastia paints a rock during the first night of the LGBTQ Symposium occurring all this month. Photo by Grace DeSanti.

The University of Rhode Island’s Gender and Sexuality Center (GSC) is hosting it’s 24th Annual LGBTQ Symposium during the whole month of March.

This symposium is usually only for one week, so with it extended to cover the whole month, the staff at the center were able to spread out their events and choose times they believed would be more convenient for people to attend.

According to Director of the Gender and Sexuality Center, Annie Russell, “[The purpose of the symposium is] to explore both historical and current events and trends that relate to LGBTQ people and to provide education, support, engagement around a variety of topics in a variety of ways.”

The symposium will have a series of events throughout the month connecting with the theme “Express your Legacy.”

The symposium began on Monday, March 4 with a rock painting night. Other events will include discussions about Ellen DeGeneres’s coming out story, body art, the community, honors project presentations and a collaboration with the Women’s Center to discuss harassment in the workplace.

Some of the projected larger events are a production of “Buffy the Vampire Slayer,” a keynote discussion panel and a fashion show appreciating ball culture.

The fashion show will hold a competition for the best dressed in three categories: Drag Fantasy, Executive Realness, and Rhody Pride. Events are open to all students and faculty, as well as the surrounding community.

Sam Barrus, a graduate student working at the GSC, introduced the keynote event for this year.

“This is the 50th anniversary of the Stonewall uprising, which was the start of the LGBTQ civil rights movement,” Barrus said. “We are having someone who was actually at Stonewall and participated in the riots come. We’re having an intergenerational panel that will have them, his husband, varying levels of students, and a faculty member who actually went to URI as an undergraduate and has been at here since the ’90s.”

Attendance is usually dependent on which event is happening. The popular events are usually the keynote event and shows.

“Sometimes we’ll do an event and only three maybe four people will come,” Russell said. “This is about a party of one. If one person shows up, that was the person that needed to be here for that time, and we needed to be here for them for that time. Every person that we touch or that touches us changes who we are and changes the impact that we have on other people in our lives.”

The theme for events is normally chosen through a collaboration of students and staff who are involved at the GSC. Ideas for specific activities and programs are also often proposed and developed by students. The GSC emphasizes the opinions of the students and works to make events relevant and important to them.

“I love the staff I work for,” Barrus said. “I think they really try to be intentional about what they do and what the campus needs instead of just doing the same stuff all the time, which I appreciate. I like that we get a lot of student feedback, that students drive the planning process.”

The Center opens this event to people all over Rhode Island, not just URI. This works in conjunction with their services to the community. The GSC helps other schools and areas by providing them with diversity training and exposing them to Safe Zone programs that have been developed here at the University.

The GSC volunteers it’s people and time to share its expertise whenever and wherever it’s needed. Russell’s motto for this outreach is “Gay it Forward.”

The Gender and Sexuality Center is the first freestanding LGBTQ building on a college campus in the U.S. It was built for the sole purpose of being a service to prevent harassment and actions against people in the LGBTQ community, as well as to be a family and home for those who need it.

“Those kind of things speak volumes to queer people that feel so hidden and silenced and go about their day sometimes in a way that just feels like maybe nobody’s seeing them or recognizing them for who they are,” Russell said about the GSC’s own history. “And here we are as you come into the campus community with this building saying: you matter. You matter as LGBTQ people and we’re going to show you that, and we’re gonna provide services that are directed to you specifically as students, faculty, and staff.”

The Gender and Sexuality Center continues to have programs during the year that serve students. They have support groups, educational meetings, shows, trainings, presentations and other longer-term events. They are all dedicated to helping LGBTQ community members feel safe and wanted.