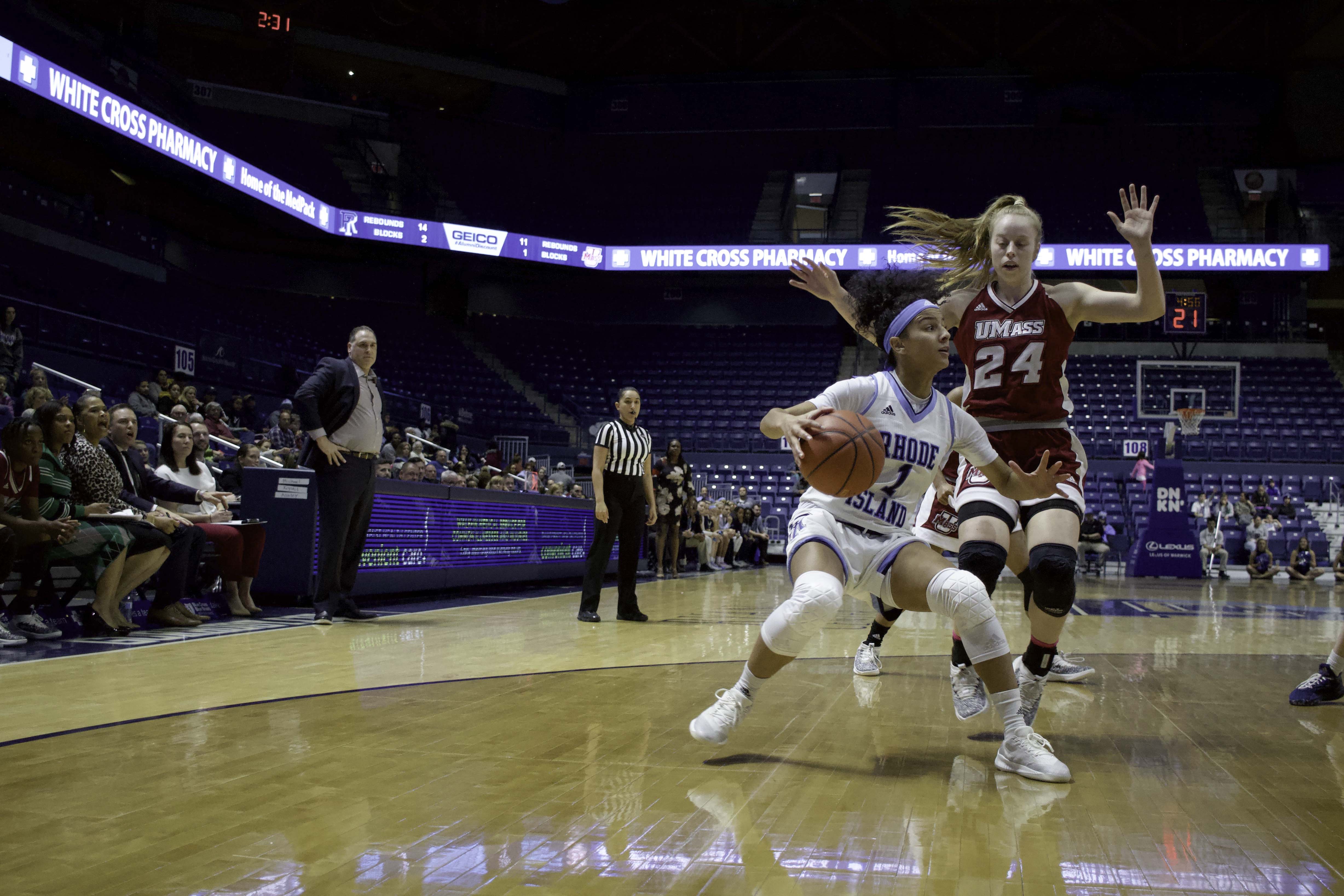 Redshirt Junior Elemy Colome goes for the step back jumper on Sunday against UMass in the final home game of the year. Photo by Greg Clark.

The curtain on Rhode Island Women’s basketball season closed this week as the team played their last home game and exited the Atlantic 10 Tournament in the opening round.

Senior day in any sport calls for a game that runs high on adrenaline and excitement. Saturday at the Ryan Center was a case in point, as the team honored four players before losing in a close game against the University of Massachusetts Minutewomen.

Seniors Dina Motrechuk and Jalissa Ross were joined by Redshirt Junior Laura Perez and Redshirt Senior Gabrielle Green during pregame festivities in celebration of their last game at the Ryan Center. Motrechuk and Perez started the game while Ross and Green did not play.

Rhody was down by 11 in the first quarter after free throws made by freshman Destiny Philoxy made the score 17-6, but the Rams countered and went on an 8-1 run to cut the lead down to just four points after a perfect trip to the charity stripe by junior guard Elemy Colome. The visitors were able to increase their lead by as many as 14 points during the first half before settling for a ten point lead at halftime. URI trailed 32-22.

The Rams were staring at a 16-point deficit early on in the third quarter, but began to pick up steam. Back-to-back three pointers by Perez and Colome cut the lead to just eight points, which got the home crowd onto their feet. Each team scored 15 points in the quarter to set up an intriguing fourth quarter.

With Rhody trailing late in the fourth quarter, coach Daynia La-Force broke out a press that forced UMass into a frenzy. The press, which after a Davida Dale steal-and-score cut the deficit to just three points, is something the team looks to when they need a spark.

“I think our best defense is our press defense,” said coach La-Force. “Sometimes we get a little bit over-aggressive and we commit fouls and then we have to pull it off. I think it came on at the right time and gave us some great energy to get easy scores (at the end of the game).”

URI had a chance to tie it late, as Erin Jones found some space behind the three-point line with 2.8 seconds left to go. Her shot hit the back of the rim, and UMass guard Hailey Leidel sank a free throw on the other end to make the final score 57-53.

The Rams scored a season-low 34 points in their first matchup between the two teams, and the 19-point improvement on the offensive end was not lost on La-Force after the game.

“We have really been focusing on not the result, but how we play and how we execute,” she said. “I think our focus has been a lot different since that game, and it showed tonight.”

For Motrechuk, she played a season-high 24 minutes in her role as a starter, contributing six points and five rebounds during the game. She also totaled five blocks, which moved her up to third place on the all-time career list and earned praise from her head coach.

“She’s a great shot-blocker,” said La-Force. “We have full confidence in Dina. I think her ability to step up on Senior Night just shows how confiden we are in her.”

The loss placed the Rams 14th in the conference standings and earned the team a ticket to Duquesne. The Dukes won their only other matchup of the season 75-57.

URI gave up 42 points in the first quarter, the most the team allowed in a single quarter all year. Rhody was unable to dig itself out of their early hole, dropping the contest 106-69.

Nicole Jorgensen had a team-high 18 points and 10 rebounds for the visitors, notching her sixth double-double of the season. Junior guard Maia Moffitt contributed 13 points for the Rams, which was a season-high for the Bay State native.

Overall, the team finished with a 8-21 record on the year, going 3-13 during A-10 play. This marks an improvement from last season, where the team failed to win a conference game and went 3-27 on the season. Colome led the team in scoring with 14.1 points per game and finished as the seventh highest scorer in the conference.

Jorgensen joined her in the top ten, as she placed ninth averaged 13.2 ppg. The center also was the sixth leading rebounder in the conference at 7.7 rebounds per game and had the third highest field goal percentage in the A-10 at 48.8 percent.