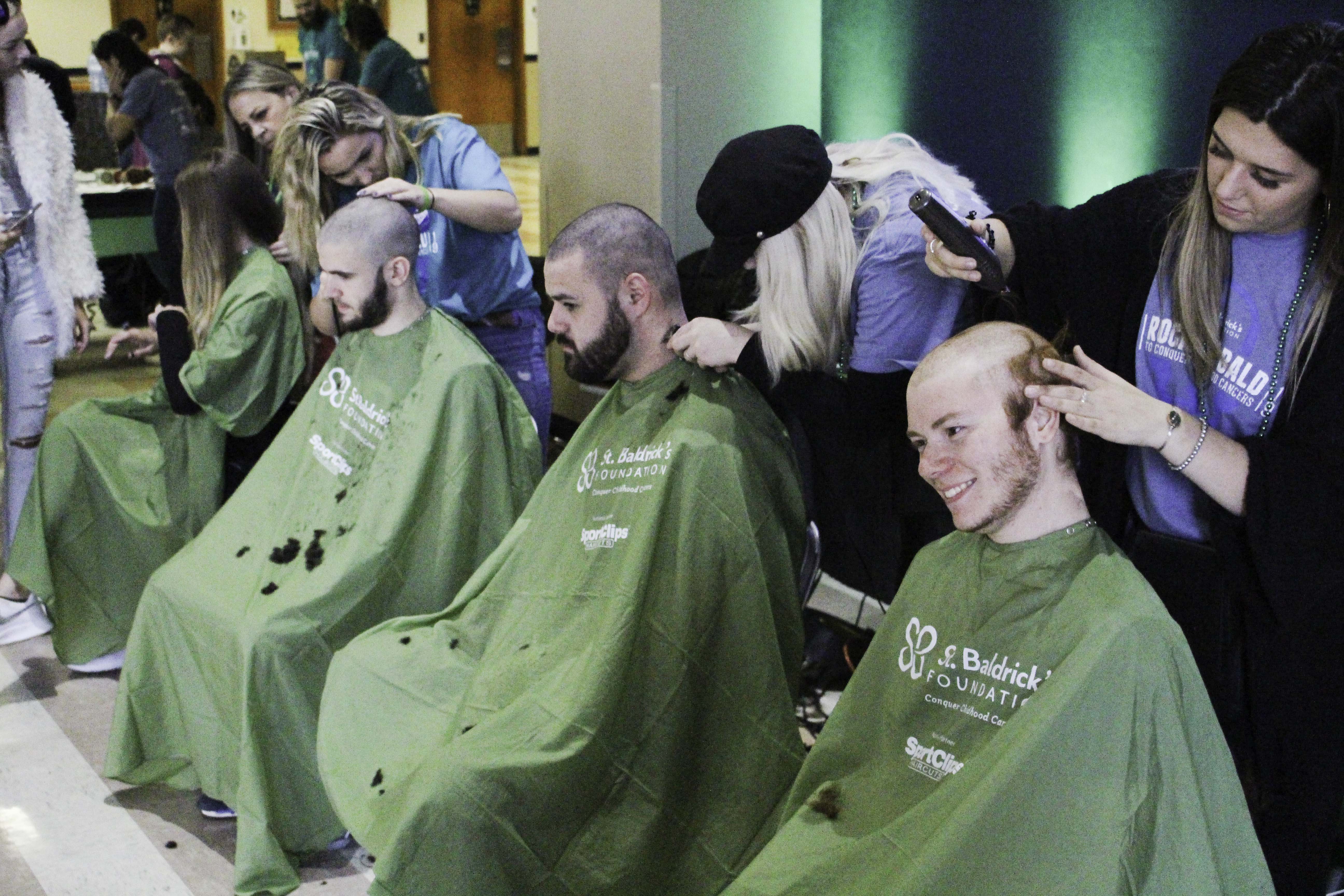 Students shave their heads toward raising awareness and finding a cure for childhood cancer. Photo by James McIntosh.

On Monday, the University of Rhode Island held its fourth annual St. Baldrick’s Foundation fundraising event in the Memorial Union and raised over $8,000.

The St. Baldrick’s Foundation is an organization committed to raising awareness and finding a cure for childhood cancer through shaving one’s head, donating hair and raising money.

Vincent Evola and Daniel McDonagh, both URI seniors, coordinated the fundraising the event and are passionate about helping spread awareness, raise funds for research and help make a difference in the lives of children diagnosed with cancer.

Evola and McDonagh said that this year’s turnout held constant with past years, with about 120 participants attending. Evola said that the turnout is made up of a large variety of people.

“The majority are students but we get some just from the area who have participated in the event in the past, as well as some professors, and the Dean of Students, Dr. Dan Graney, participated for the third time this year by shaving his head,” Evola said.

The event even featured a local news station coming to the event, with one employee partaking in the fundraiser.

“We actually had the NBC10 News come down and interview us and one of their crew members decided ‘hey why not’ and shaved his head yesterday,” McDonagh said.

The event was held underneath the video board in the main lobby of the Memorial Union. Evola and McDonagh followed a schedule of past “,” who are people who have shaved their head in the past. They also set up chairs for others who want to donate eight inches of their hair.

Evola and McDonagh have both been shaving their heads since they were young kids and have been dedicated to the organization ever since. McDonagh first got involved from following his father’s lead in 2006.

“My father works at the fire department in my hometown and so what happened was the deputy’s son was diagnosed with cancer and so the next town over ran an event for St. Baldricks and my father was a participant,” McDonagh said. “Me being the little kid I was wanted to shave my head too and be just like my dad. From there it just snowballed.”

Evola began shaving his head when he was in sixth grade and his middle school held a St. Baldrick’s fundraising event. Evola’s aunt had been diagnosed with cancer when she was a child and when he came into the middle school event where everyone was shaved their heads and all of his friends were heavily involved, Evola decided to join as well.

“I said to myself, you know what, all my friends are involved, I shave my head anyways, I might as well do it for a good cause,” Evola said. “When I got there I kind of fell in love with everyone coming together for a common goal to try and make a difference in the community and I think that’s what dragged me in and I’ve done it every year since then.”

Evola began organizing events when he was a junior in high school and fell in love with event planning.

After coming to URI, Evola realized that it would be the first time he had not participated in it since he was in middle school. However, he thought that it would be a great event to put on at the University.

“With the backing of other organization we were able to bring it here back in 2016,” Evola said.

Over the course of the four events held, Evola and McDonagh said that they have raising around a total of over $75,000.

After they graduate, Evola and McDonagh believe that the St. Baldrick’s Foundation fundraiser event will continue to grow and gain prominence on URI’s campus.

“St. Baldrick’s is a nationally recognized organization that has events all over the place, so this event for URI is going to be back again and will be back and better than ever and I think we have enough committed people to where it can be passed on beyond our years and years beyond the people who we have been working with,” Evola said. “We see people being so committed to this event that we see people want to continue to work on it at URI.”