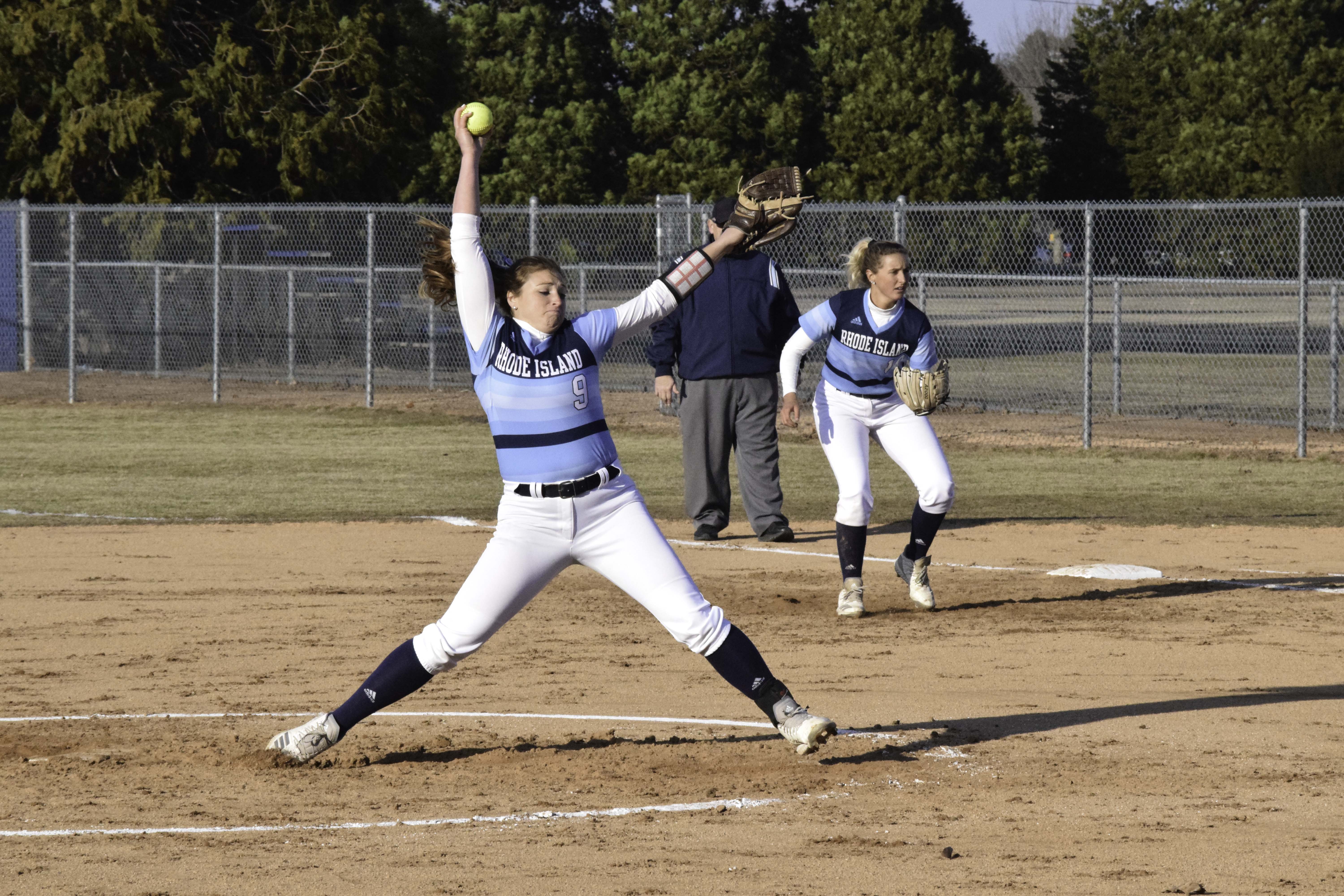 Junior pitcher Sarah Gunderson enters the stretch as she prepares to throw the pitch in URIs last home game. |Photo by Anna

Predicting how mother nature acts in the early days of spring is a fickle exercise. The University of Rhode Island women’s softball team got the wrong end of the storm this week, as the team was unable to play two of five scheduled games.

Rhody started their week in Massachusetts as they took on the Boston University Terriers. Sarah Gunderson took the mound for the Rams, who made her 10th start of the season and her 15th overall appearance.

The home team got out to an early lead in the first inning that was propelled by Emily Morrow. The senior hit a triple to bring in Emily Gant before crossing the plate herself from a single by Alex Heinen.

Boston University was able to further extend their lead in the fifth inning, again from Heinen. A sacrifice fly to second advanced the runners, scoring Nicole Amodio in the process. The Rams had two runners on at the top of the but were unable to bring them home and the score read 3-0 entering the last two innings.

Rhody trailed 4-0 until the top of the 7th inning where they finally found some offense. After Madi Killebrew hit an inside-the-park homerun in the previous inning, freshman Faith Musselwhite responded with a homer of her own. She touched them all after sending the ball over the fence in left centerfield, her fourth homerun on the season. Unfortunately for the visitors, that was their only source of runs in the contest. Boston University won the game 4-1.

The Rams travelled to Dayton University to take on the Flyers in an Atlantic 10 conference matchup. Dayton had only lost one conference game all year, while URI was looking to win their first.

The game was a classic pitcher’s duel, as the Flyers scored on a single from Julia Barr in the first inning of the contest. It was the only run either team scored all game.

Even though Senior Becca Rogers was on the hook for the loss, she was electric from the bound. The New York native threw her seventh complete game on the year and allowed just four hits along with one earned run. Her five strikeouts brought her up to 70 on the season, a figure that leads the team.

Rhody was unable to take vengeance on Dayton over the weekend due to weather. The conference foes were scheduled to play on Saturday and on Sunday, but were unable to get the games in because of unplayable conditions.

Weather could not stop URI from playing on Wednesday though, just the second home game the team has had all year. The Rams squared off against the Stags from Fairfield University where the homeside was looking to snap a six-game losing streak.

Fairfield jumped out to a 2-0 lead, as starting pitcher Karisa Hughen didn’t allow a hit through three innings. That all changed in the bottom of the fourth though after