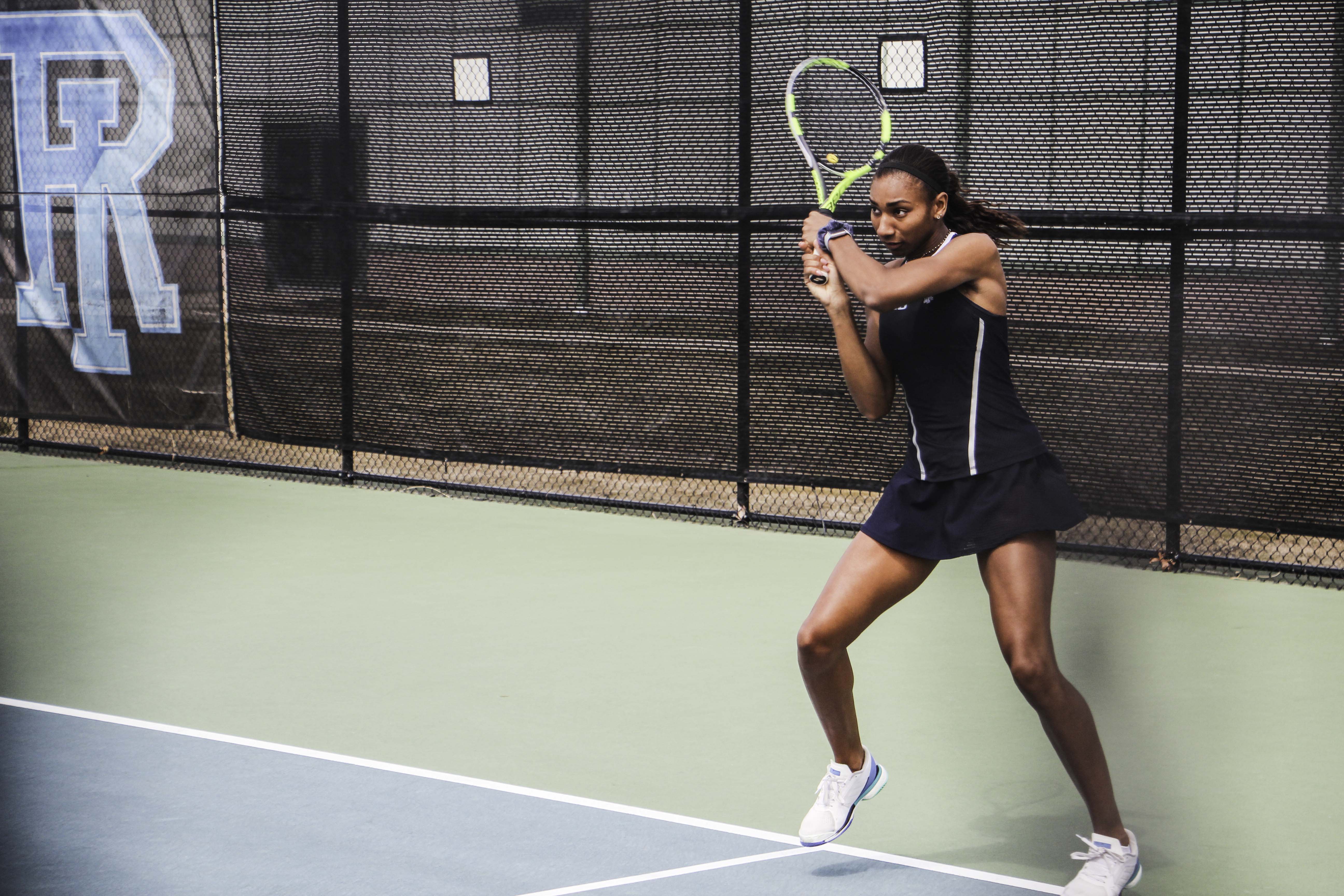 Freshman Erin gets ready after delivering her forehand hit. |Photo by Greg Clark

The University of Rhode Island tennis team split this past weekend’s match schedule, winning their match against Saint Joseph’s University 5-2, but losing 4-0 against George Washington. These matches give URI a record of 6-6 overall and an Atlantic 10 conference record of 1-2.

Rhode Island started the first weekend match on Saturday against Saint Joseph’s University with doubles, where they earned their first team point thanks to a URI sweep.

Both schools battled it out with back and forth cross court rallies in singles, but it was URI’s day as they would win all, but two matches on the day. At first singles, Saint Joe’s Nava defeated Chratian in a close match 7-6(5), 6-3. Third singles player Gomez (SJU) defeated Loredo 6-4,6-2. From there it was all URI as they won the remaining matches at two, four, five and six singles. Higuchi (URI) bested Gill-Reid (SJU)  6-2, 6-3. URI four singles star Davis defeated Conrad in a close match 6-3, 6-4. Chratian defeated Kramer 6-2, 6-3 at five singles followed by a win at six singles thanks to Haber defeating Devlin 6-3, 6-4.

The Rams did not stand a chance 24 hours after their route of the Saint Joe’s Hawks, as they fell 4-0 against George Washington.

URI got their only win at three doubles thanks to a 7-5 win from Halah Davis/Erin Chratian over Victoria Kogan and Xenia de Luna. Maria Siopacha/Melis Bayraktaroglu (GW) won a tight first doubles match over Mihaela Cordreanu/Erin Chratian 6-4. This was repeated at two singles where Sara Grubac/Katarina Marinkovikj took care of business against Paulina Loredo/Tiara Higuchi 6-4.

George Washington swept all six singles match starting with Sipacha (SJU) defeating Chratian 7-6(3), 6-4. Both Grubac and Higuchi went the distance before Grubac won 1-0 in the third. The match was suspended as other matches finished before hers. Bayraktaroglu(SJU)  defeated Cordreanu (URI) 7-5, 6-2. Marinkovikj (SJU) made quick work of Rhode Island’s Loredo 6-1,6-1. Xenia de Luna was tied with Halah Davis 2-2 at five singles before match play was suspended likewise at six singles where both players were not able to win a game.

Next up for the Rams is Senior day. As URI will host Army West Point this Saturday at 2 p.m..