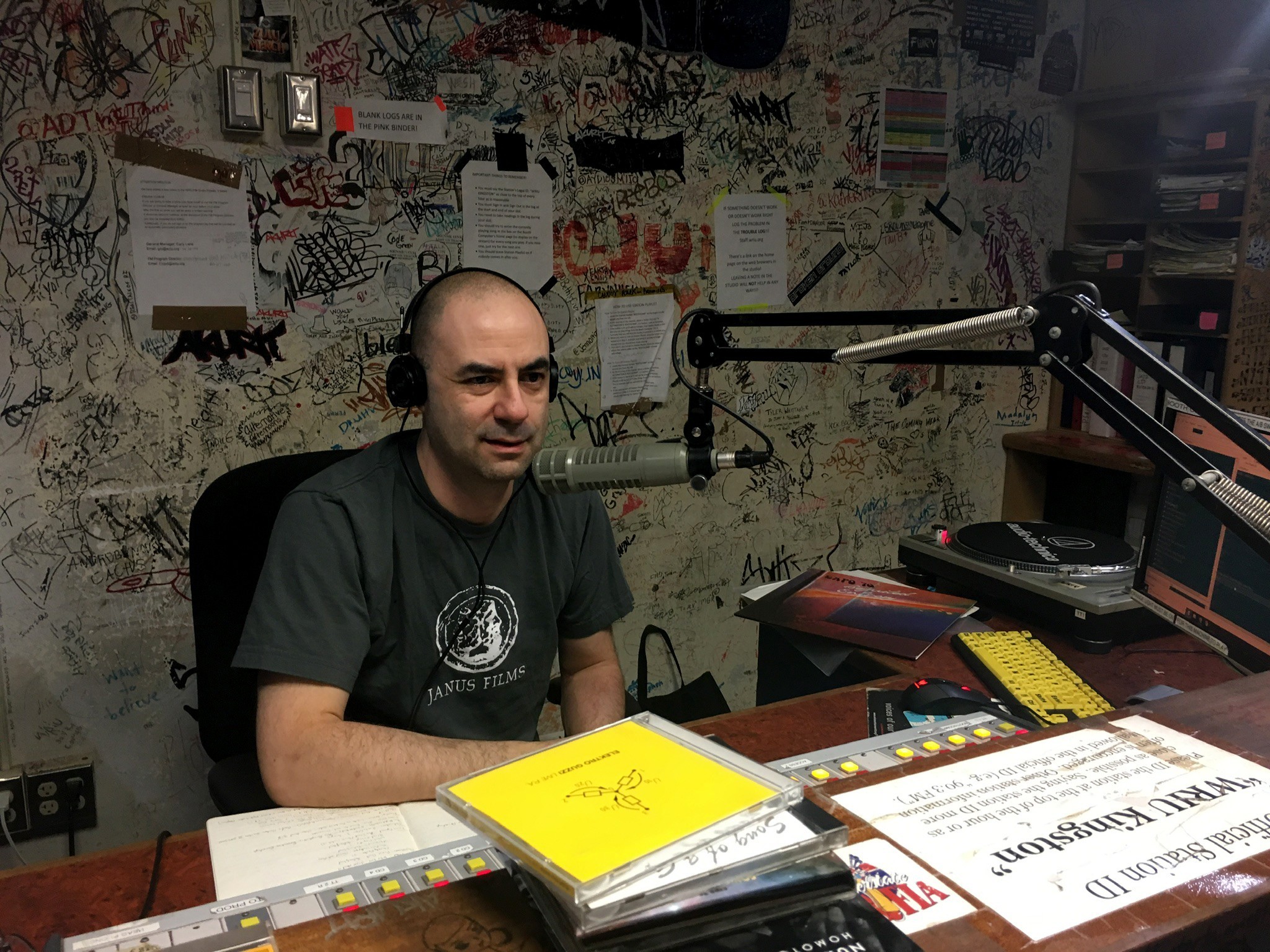 Alumnus Jim Morgan works on his WRIU radio show that he has produced since 1991. | Photo by Mary Lind.

For nearly 30 years, alumnus Jim Morgan, of the 1991 class, has been producing a weekly show on WRIU 90.3 FM that features a wide array of music. The show has had many names over the years, including “Romance” and “Colored Coin Drops” and it’s now known as “Delirium.”

“Some of the stuff I play is not music at all,” Morgan said. “It’s just sound, kind of artistic sound constructions.”

Morgan named the show “Delirium” in reference to the novel “The Brothers Karamazov,” by Fyodor Dostoevsky. One of his favorite chapters, in the translation he used, was called “Delirium,” and it’s about “kind of a wild party.”

“I liked the sound of it,” he said. “It kind of captured the essence of the show because the show is kind of intentionally disorienting and a little confusing.”

The music that Morgan plays isn’t what you might hear on a normal radio station. “I would categorize it as free form, which means that there’s no specific category,” Morgan said.

While he will play an occasional “commercial” song, a lot of what he plays includes improvisational jazz, sound experimentation, soul, dance mixes and electronic music. He also plays metal, punk and Psychedelia.

Morgan, a native of Jamestown, Rhode Island, first got interested in music because his older brother had a large record collection. He’s also been listening to WRIU since he was in high school, and largely credits the station for getting him into the kind of music that he plays on “Delirium.”

“At the time when I was in high school, there was no internet,” Morgan said. “They were playing on WRIU stuff that you literally could not possibly hear around here…It was like a window into unusual and interesting sounds that didn’t have any sort of outlet here at all.”

Since starting the show in ’91, a lot has changed in the world of radio.

“Radio is not what it used to be because of the internet,” he said. “Now you can hear anything you want, but unlimited choice also is kind of a prison in some respects. Unless there’s some curation of sound somewhere, it’s hard to find what you like.”

Morgan noted that when he started his show, college radio in particular used to be the place to go to find unique or interesting music.

It’s no secret that interest in radio has been declining since the rise of the internet.

“Anytime something that you’re heavily interested in kind of declines, becomes like a kind of antiquated or less popular than it used to be, it’s a little bit melancholy,” he said.

However, Morgan did note that it is nice that people can access music in many different ways now.

Morgan said radio can be unique in the sense that it can expose listeners to new things.

“A radio show that plays a lot of of things that you like and you can listen to on a consistent basis is kind of a cool thing because it can be this feast that opens up listening avenues that you didn’t even know existed,” he said.

“I like working with teenagers,” he said. “I think it’s a cool age, and I think it’s interesting. They’re still kind of children but they’re learning about the adult world and then getting acclimated to adulthood, but they’re not really in it yet. It’s just this really awesome, interesting transitional age.”

He also really enjoys what he teaches. Because of this, he said he does not view teaching as a job, but rather as an enjoyable experience.

“If you don’t like the subject you teach, that’s kind of, it’s a big problem in my opinion,” he said. “I really like the subject I teach. I like helping kids learn about language and poetry and helping them improve their writing skills.”

Morgan is also an avid traveller. In 2010, he spent a month travelling around Russia, which he enjoyed.

“It’s mysterious and a little bit impenetrable from the perspective of somebody who’s not Russian,” Morgan said.

He went to five cities while he was there as well as the Russian Province of Siberia. He then went to the countries of Mongolia and China. In terms of finding new music, he said that New York and London are good places for that, as is Vietnam, where he spent a month last summer.

“Vietnam’s got some fascinating music as well, although while I was there I didn’t really experience it, but I’ve played a lot of interesting Vietnamese music on my show,” Morgan said.

Morgan’s favorite part of the show is simply playing music.

“It’s enjoyable to share music with people,” he said. “I’ll get calls from people who are just like, ‘Wow, what did you, what is this?’ It’s just great to know people are listening.”