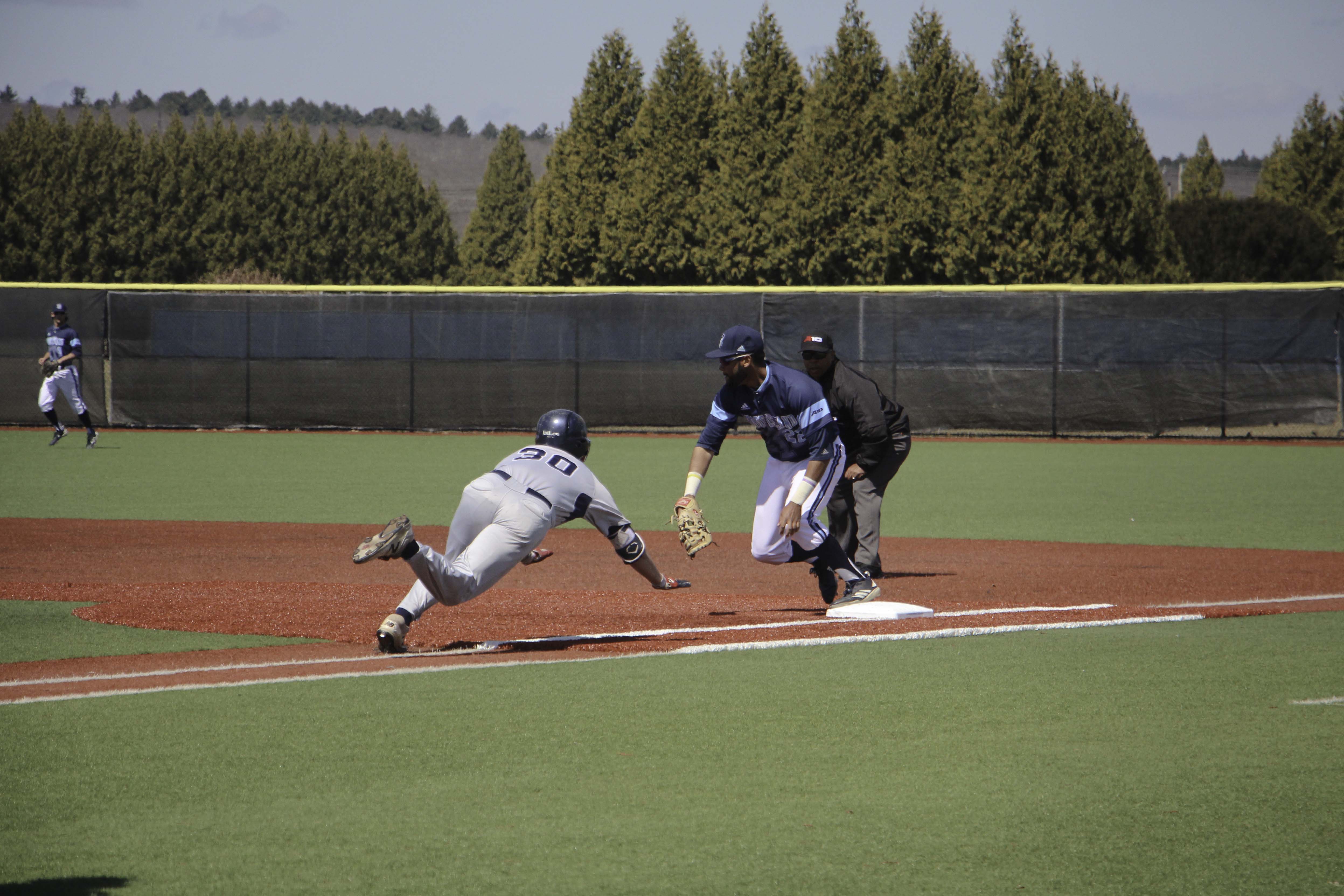 Sophomore Xavier Vargas gets ready to scoop the incoming ball as the runner dives head first into the bag. |Photo by Greg Clark.

Rhode Island Rams baseball is the hottest they’ve been all season after a weekend sweep against the Richmond Spiders.

The Rams have now won all three conference series that they’ve played, but this past weekend was their first clean sweep.

This past Friday, in the first game of three, Rhody pulled out a 2-1 walk-off win against the Spiders. Rhody won on a sacrifice fly off the bat of Josh Brodeur in the bottom of the ninth, which gave him his second straight walk-off in Atlantic 10 play.

The University of Rhode Island opened up the scoring in this game, with Kevin Heiss driving in Austin White on an RBI single in the third inning. Richmond responded with one run in the fifth, which had the game deadlocked until the Brodeur walk-off.

Ryan Twitchell started the game for Rhody and dazzled in his seven innings pitched. Twitchell gave up only four hits, one earned run, three walks and added five strikeouts. Tyler Brosius came out of the bullpen to finish the final 1 two-thirds innings, giving up no hits and tallying two strikeouts to secure the win for URI.

Rhode Island really showed off their flair for the dramatic in game two of three. In the bottom of the ninth, down 3-0 and two outs against them already, Rhody clawed and fought to climb their way back into the game.

Austin White battled with two outs over 10 pitches against Layne Looney, the Richmond closer. Looney then proceeded to walk Kevin Heiss and give up a single to Jackson Coutts to load the bases, still with two outs in the inning. Max Mircovich was able to go from down 0-2 in the count to work it into a 14 pitch walk which plated White. A Xavier Vargas single made it 3-2 after that.

Josh Brodeur, the hero of Rhody’s last two conference games, then hit a liner to left field which was able to bring around Sam Ilario to tie the game. In the bottom of the tenth, with runners on first and second, a ground ball to the middle of the infield hit by Kevin Heiss was corralled by Richmond second baseman Sage Bruhl, who, looking to make a double play, mis threw a ball to first base, which allowed Greg Cavaliere to come around and score for the win.

In the final game of the series, the Rams completed the sweep in less entertaining fashion than the first two, winning 6-3.

Jackson Coutts started the scoring in this one, with a two RBI double in the bottom of the first that brought around Austin White and Kevin Heiss.

“We’re not playing great and I just told them that,” said Head Coach Raphael Cerrato. “Ya know, we’re winning games which is awesome, but we didn’t play a great game.”

In game three as a team, the Rams tallied five errors in the field.

Cam LaFleur and Tyler Brosius were dazzling out of the Rams bullpen, going a combined five innings between the two of them. Together they allowed only one hit, one walk and eight strikeouts. LaFleur gets credit for the win, and Brosius receives the nod for the save.

“We’re just trying to win series,” said Cerrato. “The opportunity to win a series against [George Washington] win a series against Fordham, this is a good club, [Richmond] I mean they’re a good team. Their pitching is good, they got good hitters, if you make mistakes they got some big physical guys. Our pitchers, they were outstanding the whole weekend. Really outstanding job by our pitching staff.”

Rhode Island now looks forward to a weekend series against Davidson in North Carolina, where they will look to continue their hot start in Atlantic 10 play.