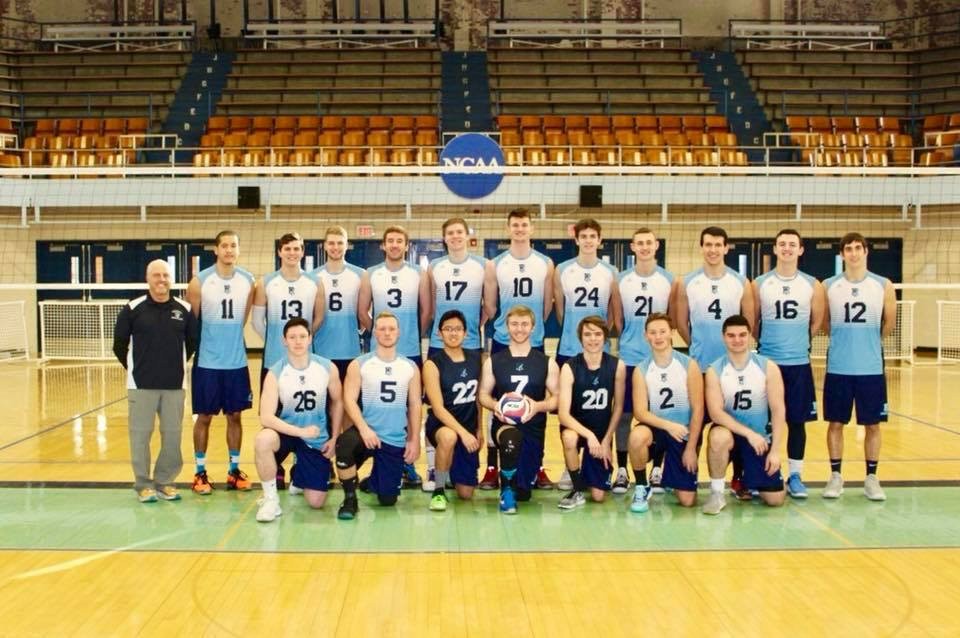 Club sports at the University of Rhode Island can slide under the radar sometimes due to the nature of a Division I school. Everybody hears about the thunderous slam dunks put down in the Ryan Center or the touchdowns scored at Meade Stadium. Yet none of the teams on campus has had a perfect regular season like the men’s club volleyball team had.

The team, coached by Mike Holden, didn’t lose a match as part of the New England Collegiate Volleyball League (NECVL). Rhody went 18-0 in the regular season, competing against the likes of the University of Connecticut, Providence College and Colombia.

Players are recruited to the roster in a variety of ways. While the team does recruit students on first-night like most club teams, according to co-captain Jack Vacarro, coach Holden scouts local talent throughout the region.

“Our coach does a good job of reaching out to some of the local guys that play in the neighboring states and in Rhode Island in high school that have committed to URI,” he said. “There’s a good pool of talent here that comes in every year and it seems to me that New England volleyball is improving a lot each year. I expect the players coming into the program to continue to be better and better.”

Co-Captain Jo Honig had a different experience of joining the team. The four-year player, who had only played one year of volleyball in high school, said he tried out for the team his freshmen year and worked hard enough to where he is now a starter. Co-captain Evan Ernst, a senior who played baseball in high school, had even less experience before taking up the sport.

“Initially I tried out for volleyball as a joke before I found out I really liked it,” he said. “I just got addicted to the feeling because when you play volleyball, it’s so much fun. There’s no part of the game that’s not fun.”

Ernst also attributed practices being fun as a reason to why he loves the sport.

The unique aspect of club sports, where teams often don’t have the funds to take buses to games, provides an enjoyable aspect for the players involved.

“Car rides to and from tournaments,” said Honig when asked about his favorite part about being on the team. “The chemistry we build outside of the gym I think it a lot of fun. We can be a little bit more social, a little bit more relaxed than the varsity teams so it’s definitely nice.”

Rhody participated in the conference championship earlier this month at the University of New Hampshire. URI entered the competition with the number one seed heading into pool play on Saturday, but the team got bit by the injury bug at the wrong time of the year.

Honig and fellow captain Nik Thommes went down injured during the tournament, which will, unfortunately, end the season for both players. Honig said he suffered an ankle injury on Saturday while playing Tufts University, while Thommes suffered an injury the next day that will require surgery.

Despite the loss of two starters leaders on the team, Vacarro remains optimistic heading into nationals that begin this Thursday in Denver, Colorado.

“Fortunately we have a little more roster depth for our national roster, so we’ll be able to work with this new lineup,” he said. “It’s looking good.”

The additional depth in the squad is something that the team has not typically seen throughout its history. This season is the first time that the team has had a B-team. Players on this team practice against the A-team and play in Division II games in the NECVL where they finished second on the year. The arrangement, a setup similar to the varsity and junior varsity arrangement seen in high school sports, also allows players to develop.

The amount of progress players have had all year will be tested this weekend in Denver, Colorado, as part of the National Collegiate Club Volleyball Championships. Ernst is relishing the opportunity to play in the tournament, which begins Friday and runs until Sunday.

“We just gotta show out in Denver and leave our heart on the court,” he said. “We’re going to have to play as hard as we can.”