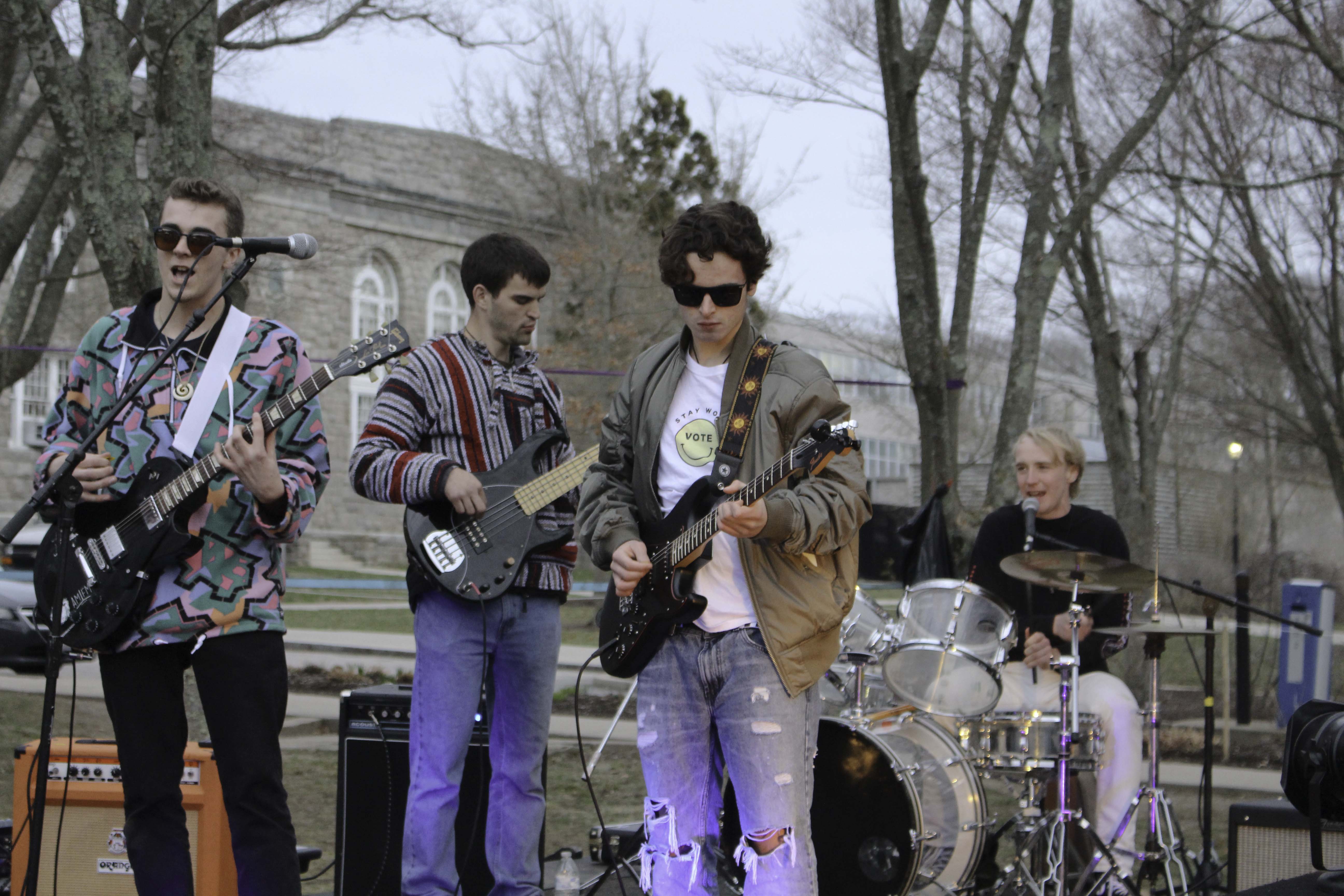 by Marissa Caponi and Kayla-Laguerre-Lewis

University of Rhode Island students who attended the You Are I festival on the quad were able to enjoy live music from bands and DJs this past Friday and Saturday despite difficulties behind the scenes.

In the middle of last fall semester, the Musician’s Guild teamed up with Flow, Electronic Music Association and the Student Entertainment Committee to bring a new and bigger music festival to the quad after Hempfest was defunded by Student Senate.

Last year, EMA hosted their own event called Relief Music Festival on the Quad, which had some success, but junior Jesse Yelin, the president of Musician’s Guild, mentioned that there were some last-minute funding issues that led to the Musician’s Guild letting EMA borrow a lot of equipment for the festival.

“We figured hooking up with more groups would be a good way to make our events bigger and a lot better,” Thomas Calitri, the treasurer of Flow said.

Having all of these groups together helped with funding and allowed them to have more people contributing behind the scenes, but there were some communication difficulties as well.

“In the planning parts it was a little difficult in the beginning to communicate with the other groups,” Anthony Malone, a freshman who was involved in planning and advertising for the event said. “But we were eventually able to collectively work together and I think that’s why it worked in the end.”

While EMA, Flow and Musician’s Guild all ended up working together to bring the festival to students, due to scheduling conflicts and budget restrictions, SEC could only contribute a small donation for the headliner, popular Indie rock group, “A Great Big Pile of Leaves.”

“We were distraught because we had put a lot of trust into SEC to help us out with a lot of this work and we’re very grateful that they were still able to give us the donation,” junior Jesse Yelin, president of Musician’s Guild said. “We don’t regret working with them at all, but it was definitely a shock when they say we can’t do a big headliner anymore.”

Originally, SEC had mentioned trying to get headliners such as Joyner Lucas and DJ but found that they could not devote the time and resources to this effort. They handle many events at once, so things can get busy.

“Originally we were planning on bringing a big name with a stage, but because of elevated costs and booking we were not able to contribute what we originally planned… It was awesome being able to meet with, discuss and try to plan something very big with so many other groups. Of it had its challenges,” senior Danny DePetro, Concerts President of SEC, said.

The many groups still hold hope for future events. “Hopefully next year, we can work with them and we can get bigger headliners and do something like this again but even on a bigger scale,” Yelin said.

Unfortunately, that was not the only obstacle these organizations faced in putting on this event. Scott Botelho, president of Flow, explained that the groups had to jump through various hoops to meet URI’s tight security rules and procedures. Botelho felt that the event was supposed to be “laid-back and fun,” and because of that, some of the various security measures should be altered in order to allow events such as this festival to occur more frequently and with less difficulty.

“A lot of the things that we wanted ended up falling through because of miscommunication,” Yelin said. This included, vendors and food trucks cancelling last minute. One food truck even showed up Friday just as the festival started and left due to lack of customers, being that it was so early in the day and the bigger acts had yet to perform.

Small setbacks out of their control also occurred, including the power outage Saturday afternoon that led to a 30-minute delay in start time, the rain that led to a somewhat muddy area around the stage where all the equipment had to be and some sound issues. Just in case, they had a backup venue in the Memorial Union that was never used.

“This was a good, I’d say, trial run year for what we want to do in the future,” Yelin said. “I think what we’re going to carry on from this is that we need stronger communication and we need to confirm everything earlier. We’ve been able to pull through considering all of this crazy stuff that’s happened.”

Despite all of the difficulties, students showed up to enjoy performances from bands such as “grizzlies.,” “Wax On,” “Blue Holes,” “Guess Method,” “Benjis,” and headliner “A Great Big Pile of Leaves.” There was also an EMA stage that featured DJs David Russell, Joe-San and EMA’s headliner, TSimba.

“Normally I don’t come to events on the quad, but this is pretty fun,” senior Megan Hamblen, who attended on  Saturday said. “It seems super chill. Even though the weather’s not that great, everyone looks really happy.”

Students also expressed desire for more events and festivals like You Are I.

“I wish we had more live shows like this, that would be really cool.” said freshman Tyler Vanable, who attended Friday night.

Freshman Eric Gramajo, who was in the audience both nights added, “I was just expecting it to be just some chairs and music, but it was more than that.”