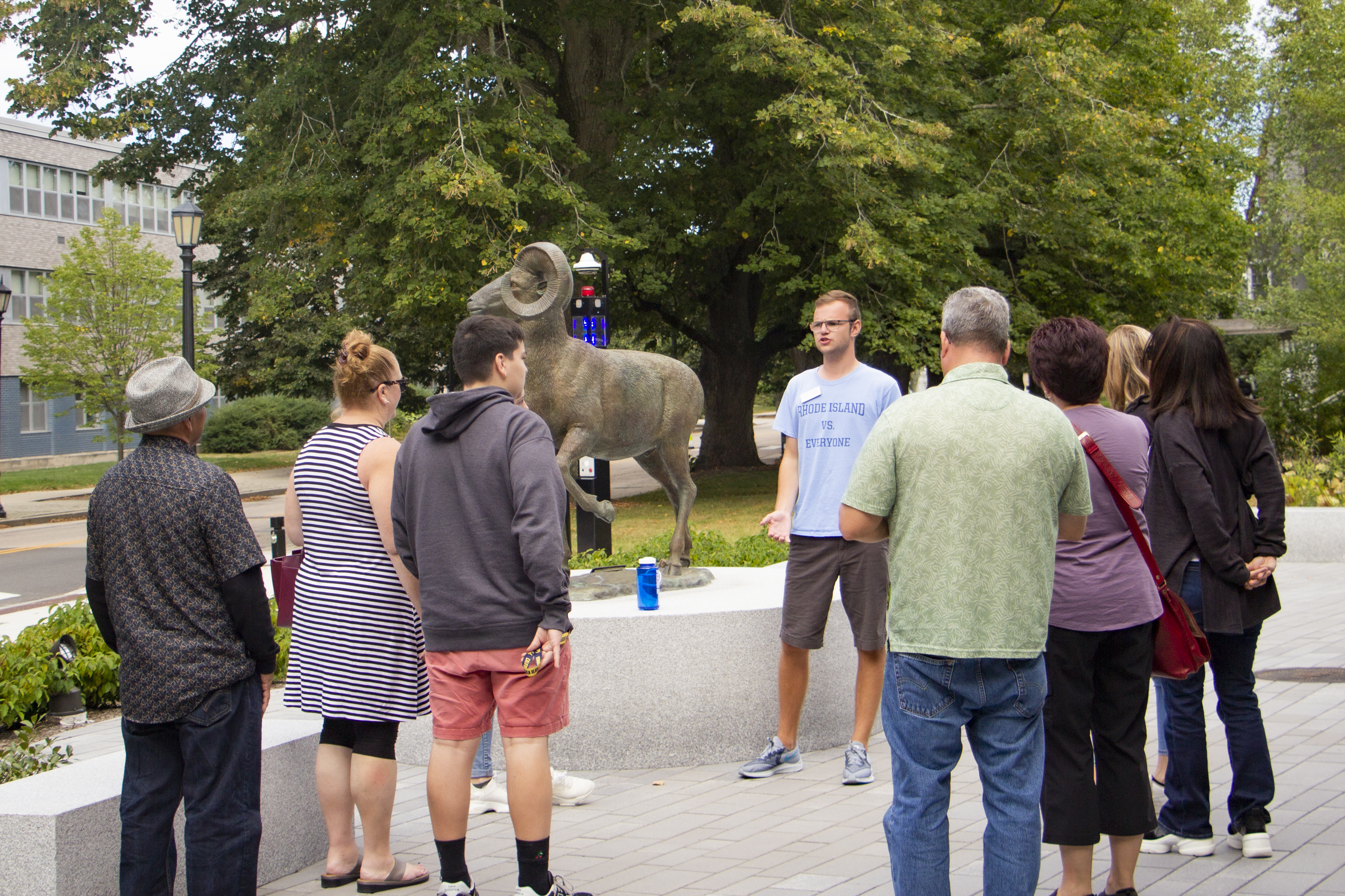 Potential new students take a tour to see what the University of Rhode Island has to offer. Photo by Greg Clark.

The Office of Admissions combined three student groups to create a new group on campus this year in an attempt to create a more authentic and diverse visit to campus for prospective students.

The three groups are: the University of Rhode Island Tour Guides; the Rhody Ambassadors; and Diversifying, Recruiting, Inspiring, Volunteering, Educating (D.R.I.V.E.) The new conjoined group is known as “the Flock,” named after a group of Rams.

According to Erin Earle, the director of the Campus Visit Experience and The Welcome Center, the goal of the Flock is to create a network of student ambassadors for the University.

“The goal of the Flock is to be ambassadors to the University,” Earle said. “I think it great to network and to meet other students in other majors and make more connections because that way when they are talking to prospective students you can connect people. Anytime you are an ambassador for the University understanding not only your story but other people’s story is very important.”

The Flock just had their first training session last Saturday, where they were trained on customer service, how to talk to people, how to greet people and public speaking. A representative from the Office of Community, Equity and Diversity came in and spoke to the group as well.

According to Brianna Montecalvo, an admissions counselor in the Office of Admissions, having students as the sole members of the Flock is a crucial part of their function.

“Students just want to hear from students,” said Montecalvo. “Families just want to hear from students. We can be on the road pretty much all we want going to different high schools and talking to them but what they really want [is] to hear from the current students. By having students being the core of the Flock, we are giving all prospective students and their families exactly what they want and we are also giving our current students resources to utilize so they know we have their back for them.”

The URI tour guides have been around since the 1960s and have the duties of conducting general campus tours and information sessions, as well as helping out with anything the admissions office may need.

The Rhody Ambassadors are a volunteer organization that was started in the early 2000s in which students share their experiences at the University and allow potential students to shadow them in programs such as “Like a Ram.”

D.R.I.V.E focuses on helping students with underserved backgrounds. The group puts on events meant to show high school students the possibilities that come from attending college.

“We have been working with three groups for years and what we decided we wanted to do this year was to make kind of an overarching umbrella for all three groups to help us enhance what we are doing,” said Earle. “All of those groups have the same mission of trying to really welcome and help students who are looking at URI as a possible choice to come to college.”