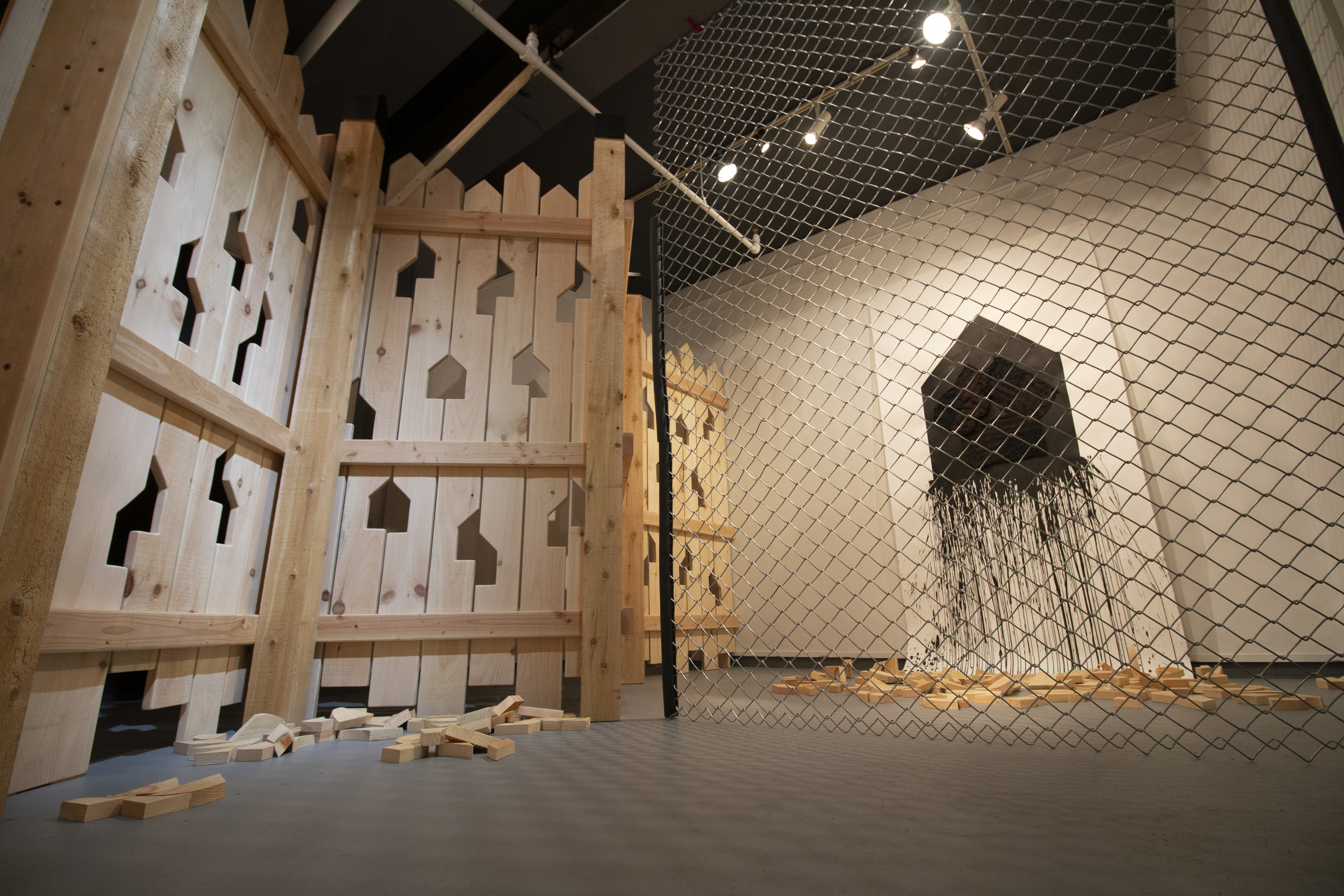 An art installation called “The House Divided” is now open for viewing in the Fine Arts Center. Photo by Grace DeSanti.

The ideas of migration and immigration are illustrated in the Fine Arts Centers’ new sculptural installation, “House Divided,” by Michael Yefko, an adjunct University of Rhode Island faculty member.

“Everything in there is a symbol for something else,” Yefko said. “Pieces of wood on the floor are broken families, broken houses, all of the pieces of wood fit together to form what’s absent in the wall.”

Yefko also included a dark house, which he said was a moral emptiness that we have to be careful of.

Along with the wooden and chain-link fence, there are other kinds of walls presented. One of these is a photograph of a thicket of briars, which according to Yefko, presents a barrier that can be interpreted in different ways.

“I wanted to have multiple obstacles and I thought that was important,” Yefko said.

Audiences are able to walk through the wall, and Yefko said that he thought that people need to feel what it was like to go through it and see the exhibit from a new perspective.

“I’ve always been intrigued by fences, fences that people put up between their yards, but also the metaphor of a fence, the divide between people,” he said.

Although he was always wrestling with his ideas in the back of his mind, Yefko said that he was unable to find the right metaphor for what he wanted to bring into the world, until the idea of “The Wall” appeared, changing the terms and ideas on migration and immigration in the United States.

He explained that there is a personal story about his family behind this art. With both sides of his family coming to the United States from Poland, Yefko was the first person in his family to go to college and see firsthand the difficulties that one encounters when they migrate to a new country.

“We all share immigration and migration stories no matter where we come from and I think we should embrace it because we’ve all been there and we should be embracing helping people,” Yefko said.

Along with his family’s immigration story, one of the most influential aspects for the exhibit was his father who fought in World War II.

“My father was wounded in World War II and walked all across Europe and into Czechoslovakia and Germany,” he said.  “So I grew up with stories of the Holocaust and what he saw. You can’t put people in cages, period.”

Another part of the exhibit is a photograph of a signpost, a sculpture that Yefko had up during the summer, called “Sign Post for a Lost Home.”

“It doesn’t give directions, if you’re lost, you don’t know where you’re going and you’re in search of something and I wanted to create a piece that made it seem like someone was looking for something but they weren’t quite sure what it was,” Yefko said. “People don’t think that it’s a big decision to come here, that they don’t have to leave their home, pulling up their family, and walking 2,000 miles.”

Yefko stated that he believes the reasons people leave their homes for a new country are complicated.

“They’re looking for a new home and so it’s on the outside of the fence, but what they find is a dead end,” Yefko said.

“I felt that there was a political connotation to it, like the wooden fence sort of symbolized the happy facade and American dream whereas the metal fence symbolized the brutal truth of immigrants trying to make it past the border and the black American flags behind that fence kind of supported my feelings and thoughts on that,” said Christie Swanson, a junior who attended the “House Divided” exhibit. “Very raw and real, definitely something to think about.”

The “House Divided” exhibition is on view from Mondays through Thursdays, 11:00 a.m. to 4:30 p.m. until Oct. 4, in the Project Space Gallery of the Fine Arts Center.