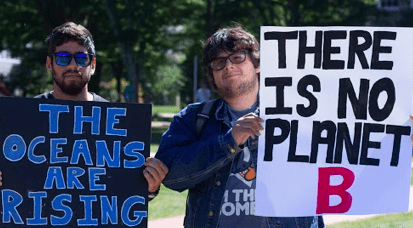 Students and faculty take to the Quad to protest climate change and demand for government action. Photo by Greg Clark.

Students, staff plan to protest the inaction regarding climate change

As a prelude to a larger demonstration on Sept. 27, campus community members held a climate strike on the quad last Friday, demanding that elected officials take more aggressive action against climate change.

Millions of people across the globe participated in climate strikes on Friday, Sept. 20 in response to inaction from international leaders regarding climate change. Protesters wish to end the extraction and usage of fossil fuels, as well as to have governments invest in renewable energy.

Inspired by 16-year-old Swedish activist Greta Thunberg, the protests came ahead of the U.N. Climate Summit on Sept. 23. Global climate strikes continued throughout the week, and will also occur tomorrow.

“Climate change is something that is going to be affecting everyone for generations, so it’s really important that we all come together and take action against it” graduate oceanography student and striker Nicole Flacchia said.

About 40 students, faculty and staff members and South County residents attended the initial protest on the quad. Strikers carried picket signs with messages such as “There is No Planet B” and “Our Oceans Are Rising, And So Are We.”

Graduate oceanography students Sarah Nickford and Afonso Goncalves organized the event because they, along with other students, were unable to make it to the climate change protest in Providence.

“I first heard about the larger strikes in some of the bigger cities like Providence and Boston, and I was asking some of my fellow grad students whether they were participating,” Nickford said. “For a various number of issues, a lot of people weren’t able to make it out, because you have to leave quite early in order to make it there on time. So I wanted to create something that was a little bit more accessible, although I wasn’t expecting anywhere near the number of people that were going to be in Providence or Boston. I just wanted to make an event that people could go to that was closer where people could feel like they are participating.”

Activists will hold a larger strike on the quad tomorrow from 2-4 p.m. Last week’s strike included discussion about future demonstration ideas. Some demonstration ideas mentioned include a “lie down” in which protesters lie on the ground like a corpse, representing those who would be killed by climate change, or a march around the quad. The local chapter of the Sunrise Movement, an organization dedicated to fighting climate change, will also be involved.

Anyone is welcome to join the second protest at any time. Goncalvez hopes that this larger protest will get more people, especially high school and college students, involved.

“That’s our plan, to have something today small, so people can get interested in participating and spread the word here in South County,” Goncalves said. “We’ll bring everyone together, where we’re teaming up with the local chapter of Sunrise, to have a bigger event with planned activities.”

According to NASA, global temperatures have increased by 1.9 degrees Fahrenheit since 1880. Although the Earth has gradually grown warmer over time, the warming rate between 1880 and the present is unprecedented, according to NASA. Many scientists believe that this is because carbon dioxide emissions trap heat, warming the planet as a result. Some scientists consider shrinking ice sheets, extreme weather rising sea levels as evidence of climate change.

Goncalves and other protesters believe that political participation is a key factor in getting elected officials to take climate change seriously. Goncalves suggested that activists hold protests weekly until politicians take serious action against climate change. Others also strongly suggested that those interested in addressing climate change need to vote so their voices have an even stronger impact.

“For any climate change action to occur, there to be the proper people in the legislature to make it happen” Art Hurwitz, a protester and Narragansett resident said. “So, it’s important for you to vote.”