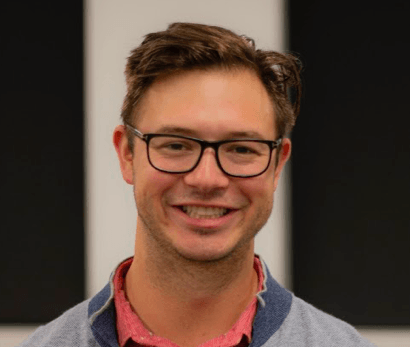 “I started as a child actor and I realized that I was mostly drawn to the act of being on set and not so much the camera.”

Nicholas Corsano, a new University of Rhode Island film professor, said that from a very young age his interest in film was born.

“When I was on set even as an 8-year-old I was mostly excited about ‘how does this machine work’ the machine that is the film camera, the director, the producer, the sound operator, the lighting and I found myself being drawn to that side immediately.”

Recently Corsano has filmed a feature length sci-fi film in Portugal about technology and its relationship to self. He also just completed a new film for his 100-foot film series about society or self-compose constructs. This series focuses on the meditations on theories, specific concept or theme.

When Corsano was an undergraduate student at Southern Connecticut State University, himself along with additional students were offered funds to start a TV station. Through the process of getting the TV station up and running he became a mentor to the new members, and discovered that not only did he love production but also enjoyed training people in the world of production.

“I think my 18-year-old self would be really mad at me because I’m a college professor, but I found this to be incredibly rewarding and it has allowed me to be successful in not only what I do here but also to have the life I wanted to have,” Corsano said.

For the past eight years Corsano has resided in Boston, however, he said that URI’s film program was almost exactly what he was looking for. He wanted to become part of a program that was still growing and one he could get to know a lot of the students and introduce new academic topics to.

“If you teach through the programs, so all four levels, you’ll get to know in the best way almost every student in the program on a real personal level,” Corsano said. “To me, that’s really important because as a filmmaker I think my goal is to get to mentor students and build on that relationship through time and with a program like this you can do that.”

One of the classes Corsano teaches this semester focuses on cinematography. While many film students enjoy being behind the camera there previously hasn’t been a class offered solely on this topic at the University.

Junior film major Robbie Clark said that even early on in the semester he already can take away a lot from Corsano’s cinematography class and has benefitted from Corsano’s teaching style.

“I would characterize his [Corsano’s] teaching style as unforgiving, but in a good way,” Clark said. “This class [FLM220] deals with a lot of film industry jargon, technical information and hands on knowledge, and Nick [Corsano] understands that it’s a lot to learn, but he has a way of posing problems or questions to us and guiding us to the right answer.”

This is Corsano’s first semester as a professor at URI. He is currently teaching FLM 110, Introduction to Film Media Production Technologies and FLM 220, a production course focused on cinematography.

Corsano received his undergraduate degree in communications with a specialty in video production at Southern Connecticut State University. He obtained his Master of Fine Arts in media art from Emerson College. His specialties lie in installation work and cinematography.