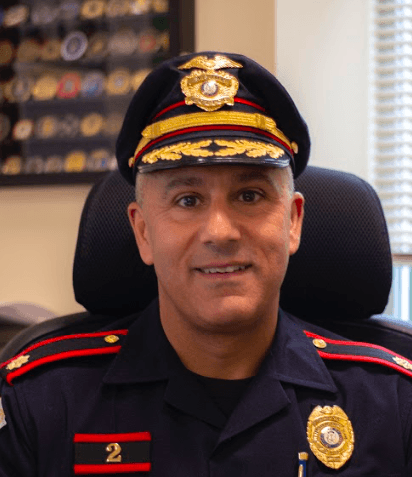 Major Jagoda, who has worked for campus police since 2015, was a first responder at Sandy Hook, among many other calls to action. Photo by Grace DeSanti.

Long-time police officer is a crusader for gun safety and bettering the community.

Major Michael Jagoda of the University Rhode Island Police Department carries himself like you’d imagine a police officer would. He stands up tall and straight and has a firm handshake. He’s dignified and methodical when he speaks, and leans forward at his desk when he explains things. His sentences are clear and to-the-point. You will see emotions in his face before you ever hear them in his voice, but they are very much there.

The walls of his office are adorned with badges, certificates and maps, but featured the most prominently are family photos. There are a few right behind his desk, some older and some more current. He also has a photo of him in uniform shaking hands with Hillary and Bill Clinton, and another with Barack Obama from when he assisted in their security when they were in Connecticut. In the back corner near the door, he has a television that always plays the news.

Jagoda has been in his current position at URI since coming to work here in 2015, which is 24 years after he graduated in 1991. Before that, he served in the Connecticut State Police. He had a variety of roles there and saw a myriad of tragedies and hardships, including several mass shootings.

Then, one cool, clear Friday in December of 2012 the Sandy Hook shooting happened. Jagoda was a first responder, running a command there for nearly five days.

“I didn’t realize how big of a scene it was…until maybe a few hours later,” Jagoda said, when they were able to put a TV on in the school.

All day, the command had been coordinating communications, traffic, medical care and the deployment of federal, state and local law enforcement personnel.

After 18 hours on the scene, his “big boss” told him to go home to his family.

“It was very emotional for me, for the first time in my career, it was pretty emotional in terms of seeing my family,” he said.

Jagoda has three daughters who were in school at the time. His wife is a school teacher.

After sleeping for about six hours, he went back.

“I got my suit back on, my uniform and I headed back,” he said. Jagoda and peers felt more needed at the scene than they did at home. “Everyone felt like they needed to do their job there,” he said.

One of Jagoda’s duties with the Connecticut State Police was to run police funerals. Usually, those were for officers killed in the line of duty or other circumstances. After Sandy Hook, he was asked to do the first of the funerals for the victims– one of the children.

“I won’t tell you the name, but it was, it was very hard,” Jagoda said.

Having seen the effects of gun violence first-hand has led him to advocate for gun safety. He’s served on a group put together by Governor Gina Raimondo to address issues of gun safety. He is passionate about sensible gun laws, including assault-style weapons and high capacity magazines.

Shooters with assault-style weapons “aren’t experts in marksmanship,” he said, “they’re just spraying…trying to kill as many people as possible.”

With non-assault style weapons, shooters would have to reload, which takes time.

“[That time] gives people an opportunity to get out of there, to avoid the situation, to barricade, to fight back, whatever it is,” Jagoda said.

Banning assault-style weapons is a measure that would protect his officers, too.

“My concern is to keep my officers safe, too, and give them an opportunity,” he said.

URI police officers carry pistols that are advanced enough for the day and age, but are nowhere near similar to weapons like AR-15s or AK-47s.

Being involved in gun safety efforts and community policing, as well as having a “very good support system” in his wife and kids, has helped him cope with life after Sandy Hook and the myriad of other things he’s seen in nearly 26 years as a police officer, having started at the Connecticut State Police Academy in 1993.

“There’s not a morning that I don’t wake up that I don’t think about Sandy Hook,” he said. “I think about it, but I try to make it in terms of making our officers and our community safer prepare for an incident like that.”

For Jagoda, this also impacts his work at URI. He went to school here, as did his wife. Two of his children are currently students as well.

Since arriving at URI, Jagoda has also been involved in the URI Police’s community policing efforts, which has officers present and engaged in community life. This includes big things, like organizing toy drives for Hasbro Children’s Hospital. It also involves smaller things, like having officers hand out grilled cheese sandwiches on the Quad or having officers riding around campus on bikes.

“I feel like the work that we’re doing is appreciative and [that] we’re making a positive difference,” he said.