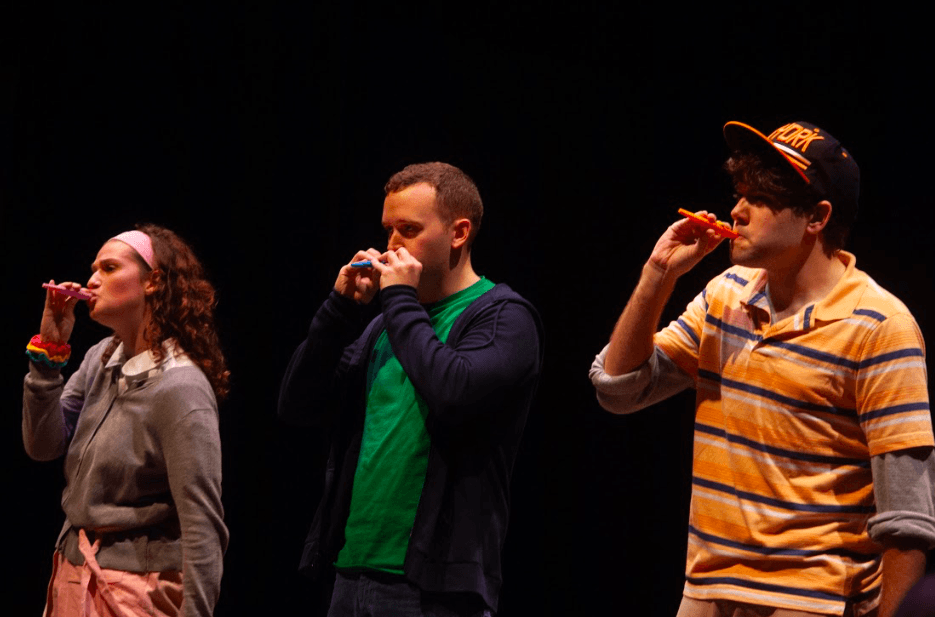 (Left to right) Lauren Janetti, Conor Delaney and Trey DiGioia play third-graders who rebel against their fundamentalist principal in “A Brief History of the Earth and Everything in it…” Photo by James Singer.

For a quick minute, bring yourself back to the third grade. You likely learned how to multiply, write book reports or thought writing words three times each was the worst thing ever. the third-graders at Williams Jennings Bryan Elementary School in Springfield, Missouri seem to be too busy challenging their fundamentalist principal Dr. Marsden, played by Lily Ferreira, to be writing any book reports.

These third-graders are actually played by University of Rhode Island students in Professor Dave Rabinow’s original musical, “A Brief History of the Earth and Everything in it…..” And according to these students “everyone loves a musical,” as they tell you in one of their numbers.

The musical does an excellent job showing what measures people are willing to go through to make statements about what they believe is right. These third-graders are willing to risk getting recess away and fourth-level detention, which is the absolute worst thing that any-third grader can imagine. However, they successfully stand up against Dr. Marsden and her strict religious ways. This all represents what possibly happens when adults both young and old disagree with politicians, as well as what measures they’ll go to defy them.

While the show covers heavy topics, the fact that the characters are young children instead of adults offers comedic relief. If the characters were all adults the tone of the show would be more serious and less upbeat. There’s something humorous about seeing the way third-graders explain the Earth’s history with a scientific approach.

Each actor excelled at making their character their own. Their comedic timing skills were evident and their physical reactions to what was going on added so much more to the show.

While Denton the gym teacher, played by Josh Raymo, was on the Dr. Marsden’s side and didn’t have many lines, his character development was absolutely hilarious. Throughout the show you could turn to him for comedic relief even when the current scene was getting tense.

Rabinow succeeded at writing a show that is a reflection of what’s going on in our world today without overstepping any boundaries. Toward the end of the show, the third grader Derek, played by Conor Delaney, brought the show to a pause to put a disclaimer out along with the rest of the cast. The disclaimer explained that the characters they are playing are not actual representations of themselves. With the cast and crew pleasing a full audience on opening night, it looks like they will have a great set of performances this weekend. The dates left to see the show are Oct. 11-12 and Oct. 17-19 at 7:30 p.m., as well as Oct. 13 and 20 at 2 p.m. Tickets are $20 for general public or $15 for senior citizens, faculty, staff and students. They can be purchased on the theater department’s website or at the department’s box office.