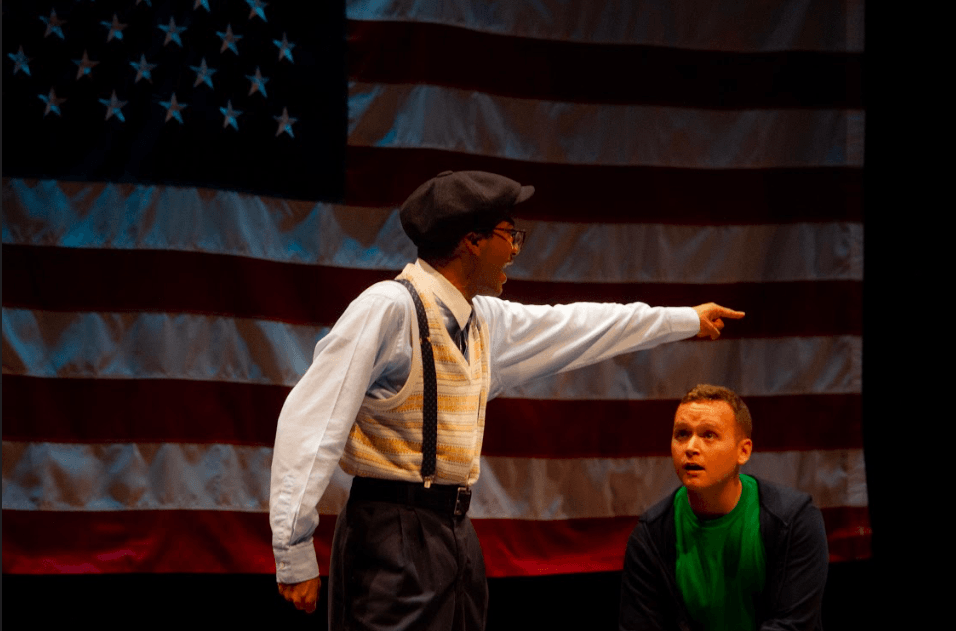 Omar Laguerre- Lewis and Conor Delaney play third graders in “A Brief History of the World and Everything in it.” Photo by James Singer.

The University of Rhode Island’s theatre department opened their season with “A Brief History of the Earth and Everything In It…..,” a satire show-within-a-show put on by a third grade drama group, on Thursday, Oct. 10.

The drama group is putting on a show they wrote in an effort to combat the changes in curriculum their fundamentalist principal, Dr. Marsden, has made. The show doubles as what playwright Dave Rabinow calls a “mini-musical,” featuring songs ranging from topics about the theory of Intelligent Design, the pseudoscientific argument for the existence of God, to the annoyance of being put in time out.

This is just the third production of the show as a full-length one-act musical without an intermission, and Rabinow, who is also a playwriting instructor at URI, was often present during rehearsals.

“It’s really been fun watching it round into shape,” Rabinow said. “I thought opening night had come so far from where I had seen the last through, right before they’d gone into tech week.”

A big difference noted between the rehearsal room and the actual shows is the addition of an audience, especially with this show. For this production, J Studio was transformed into an elementary school auditorium that doubled as a cafeteria as well as a gymnasium. Additional seating was available for audience member at two circular tables embedded within the set as well as a few red plastic chairs that can bring you right back to the third grade on the side of the set. Audience members are treated as though they are part of the show, there to attend the show-within-a-show and their participation is encouraged.

“I was a little bit nervous if the audience would get all of the jokes or participate,” junior Trey DiGioia, who played third grade drama student Max, said. “I was pleased with how the audience was into it.”

DiGioia performs a solo rap number in the show about the idea of relativism, or, as he explains in his rhymes, the doctrine that knowledge, truth and morality exist in relation to culture, society, or historical context, and are not absolute.

In a show jam-packed with references to musical theatre, religion, celebrities and famous scientists and thinkers, dramaturge and junior theatre student, Emma Becker, had a lot to do on this show. A dramaturge is a literary advisor or editor who helps the actors and those working on the show find context for the script. As a directing concentrate, as well as an actor, dramaturgy is one of the production credits offered, and she jumped at the opportunity. She ended up making a 10-11 page glossary for the cast and director, Rachel Walshe.

“This show is riddled with references,” Becker said. “Everything that is in there is so purposefully placed there that at first, it might go over your head, but once you delve deeper, there’s a very specific reason for why they’re brought up.”
Becker will be present along with Rabinow, Walshe and Chair of the department philosophy, Dr. William Bartels for a talkback with the audience following the 7:30 p.m. show on Friday, Oct. 18. A talkback provides a space and forum for audience members to interact with people involved in the production, usually in a question and answer format and for those involved in the production to gain insight into what the audience thought of the show.

“I’m really looking forward to that,” Walshe said about the talkback. “Once the cast has audiences, that’s when the rhythm of the show gets really set, so the second weekend tends to be so great. [It] becomes a richer, fuller experience.”

If you missed opening weekend, there are still four more opportunities left to see “A Brief History of The Earth and Everything In It…..” with 7:30 p.m. performances on Thursday, Oct. 17 through Saturday, Oct. 19 and a 2 p.m. matinee on Sunday, Oct. 20. Tickets can be purchased at the box office located in the Fine Arts Center or online.