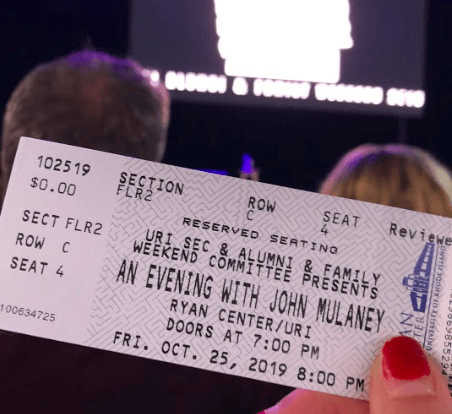 John Mulaney had the audience rolling on the floor Friday night at his stand-up show. Photo by Kayla Michaud.

“Every college I have ever performed at ever, before I go out, gives me a speech about what I can and cannot talk about it. That did not happen at the University of Rhode Island.”

Stand-up comedian John Mulaney kicked off this year’s Alumni and Family Weekend with a sold-out show. From the second he walked on stage he had the audience laughing. In the midst of making fun of the state’s billboards, town names and “Narragansett Nuisances,” Mulaney taught Kingston quite a few life lessons.

Lesson number one: Always know the year you graduated high school and the year in which you were born on your fake ID.

At 16 years old, Mulaney went to the liquor store with his friend John O’Brien, who had a fake ID. The cashier asked O’Brien when he was born and O’Brien was unable to answer. On their way to the second store they memorized his birth year, 1976. When the next cashier asked him when he graduated high school O’Brien responded “1976,” which made the 16-year-old boy claim that he was over 30 years old.

Lesson number two: Talking sh*t with your significant other is the best part of being in a relationship.

According to Mulaney, going to parties where you and your significant other spilt up and later reconvene to talk about everyone after is “one of the greatest gifts in a relationship.” He said that this is what he does with his wife and recommends doing this more.

Lesson number three: Wear a Donda West/Robert Kardashian XXL t-shirt to bed in case someone breaks into your home.

If woken up by your security alarm while wearing this t-shirt, and your wife moved your baseball bat that you usually keep behind your bed because of a new-found obsession with Marie Kondo’s “The Art of Tidying Up,” then your best bet is to keep all your lights off and act as if you know your own floor layout, even if you do not.

“So I’m walking down the stairs just like Bird Box-ing it,” Mulaney said. “It’s totally dark and I have no weapon except maybe the t-shirt itself which might buy me a few seconds of confusion.”

Mulaney read an article published in URI’s student newspaper, The Good Five Cent Cigar, about the decrease in nuisance complaints compared to past years this fall. He particularly enjoyed the quote from a URI student that said “Yes, we are college students, but we are humans, too.”

Lesson number five: Don’t be tense in a car accident.

A friend once told Mulaney that you have a higher risk of getting hurt in a car accident if your body is tense. Mulaney remembered this when he was being driven to the airport at 4 a.m. in Cleveland and the car was spinning off the road while the driver repeatedly yelled “God helping us.”

Mulaney’s performance pleased the sold-out arena with its original humor and audience interaction. While he proved that comedy can be both verbal and physical, he also showed how a big part of comedy is based off of how the comedian and the audience feed off each other.

Mulaney was brought to campus by the Student Entertainment Committee. Fabian Coronado, president of concerts for SEC, said that bringing Mulaney to campus was a great call for alumni and family weekend. Coronado also said that he appreciated how Mulaney’s performance seemed unscripted.

“He was real witty and quick with his jokes that seemed to be on the spot,” Coronado said.