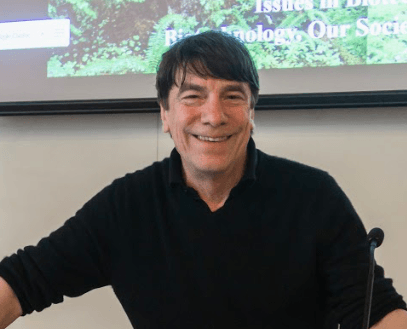 Albert Kausch has a 4.6 on RateMyProfessors.com.

Over the last 15 years, biotechnology professor Albert Kausch has earned a 4.6 rating on RateMyProfessors.com. Photo by Autumn Walter.

“Absolute best professor I have ever had.”

This is just one of the overwhelmingly positive reviews left on ratemyprofessor.com for the issues in biotechnology Professor Albert Kausch.

“I like teaching and doing it effectively,” said Kausch.

Over the years, he has obtained a 4.6 rating on the popular rating website and has a growing 220 reviews from former and current students. Currently, Kausch has the second most reviews of any teacher from the University of Rhode Island, right behind psychology Professor Susan Horowitz Boatwrit.

Kaush has been teaching this course at the University of Rhode Island for over 15 years and serves as the director of the Plant Biotechnology Laboratory.

‘Issues in Biotechnology’ is one of the courses Kausch teaches. It is a general education course open to all majors that covers the social and ethical implications of current biotechnological advances, applications and techniques.

These questions form the foundation of the basic principles discussed in the class.

Kaush emphasized his belief that accessibility to this information remains the most important factor in informing the public and helping “purvey” the facts.

“My feeling about it is the technology is moving very quickly and people who don’t understand this are making important policy decisions that will influence the future and our public,” Kausch said. “Unless we have an informed public, we have misinformed policy.”

“I’m interested in evidence-based dialogue,” Kausch said. “Not your opinion, not your belief. I want [students] to be able to sit comfortably at a Thanksgiving table and discuss the controversies of GMOs or ‘Did you get your flu vaccine Uncle Bob?’ ‘Why not?’”

Alongside the classic lecture style set up for the course, there is an online option to receive credit as well. Live lectures are recorded and constantly updated depending on always-changing biotechnological updates. The structure of the three-hour-long lectures are centered around student involvement and participation.

“I start off [the lecture] with the news in science,” said Kausch. “Also in my lectures I include the students. I’m interested in their response. So we have polling questions, forums, interaction. I can ask some very interesting questions. I think that helps to make it relevant.”

Kaush, or as some of his students refer to him, “Doctor Doom and Gloom,” understands that some of the realities of the more difficult issues taught in class, such as the inevitability of the next pandemic flu, can be daunting at first.

“People don’t talk about it,” he said. “I want to make all of these complicated topics accessible to a broad audience.”

Although there may be a small number of  reviews from unsatisfied students found online, Kaush seems to be the hardest critic on himself.

“When I give a lecture, I drive home and I grade myself,” he said. “How did I do tonight?”

After having spent time in the Biotechnology Industry, Kausch decided to try out teaching for a variety of reasons.

“One of them is I really, really love teaching,” he said. “You know, I love the topic and so, I think this just comes out of me. I think my passion for it is driven by an interest to convey these topics to other people that would excite them in the same way that I do.”

Kausch credits his teaching style to the constant need for renewal of old lectures and PowerPoints. In his opinion, he believes students resonate so well with his teaching style because of his commitment to student engagement and assurance the information is being understood.

“I care about what they think,” he said. “I’m more interested in having [students] become interested in science, technology and the development because they all are so socially relevant.”

Kausch’s reasons on why students should take his class revolve around the world’s view on nature.

“If we can appreciate nature, we are less likely to abuse it,” he said.

He also makes it clear no one major has a ‘leg up’ in the course compared to another, and that the content and delivery of it is manageable for any person studying any subject.

“These are very technologically complicated topics that I have worked very hard to condense to an accessible level,” he said. “If I talked technologically about any of these topics, I would not have freshmen in my class. What’s the point?”

Often times, at the beginning of the semester, he prompts students to consider this proposition, as it’s one of his favorites to ponder: