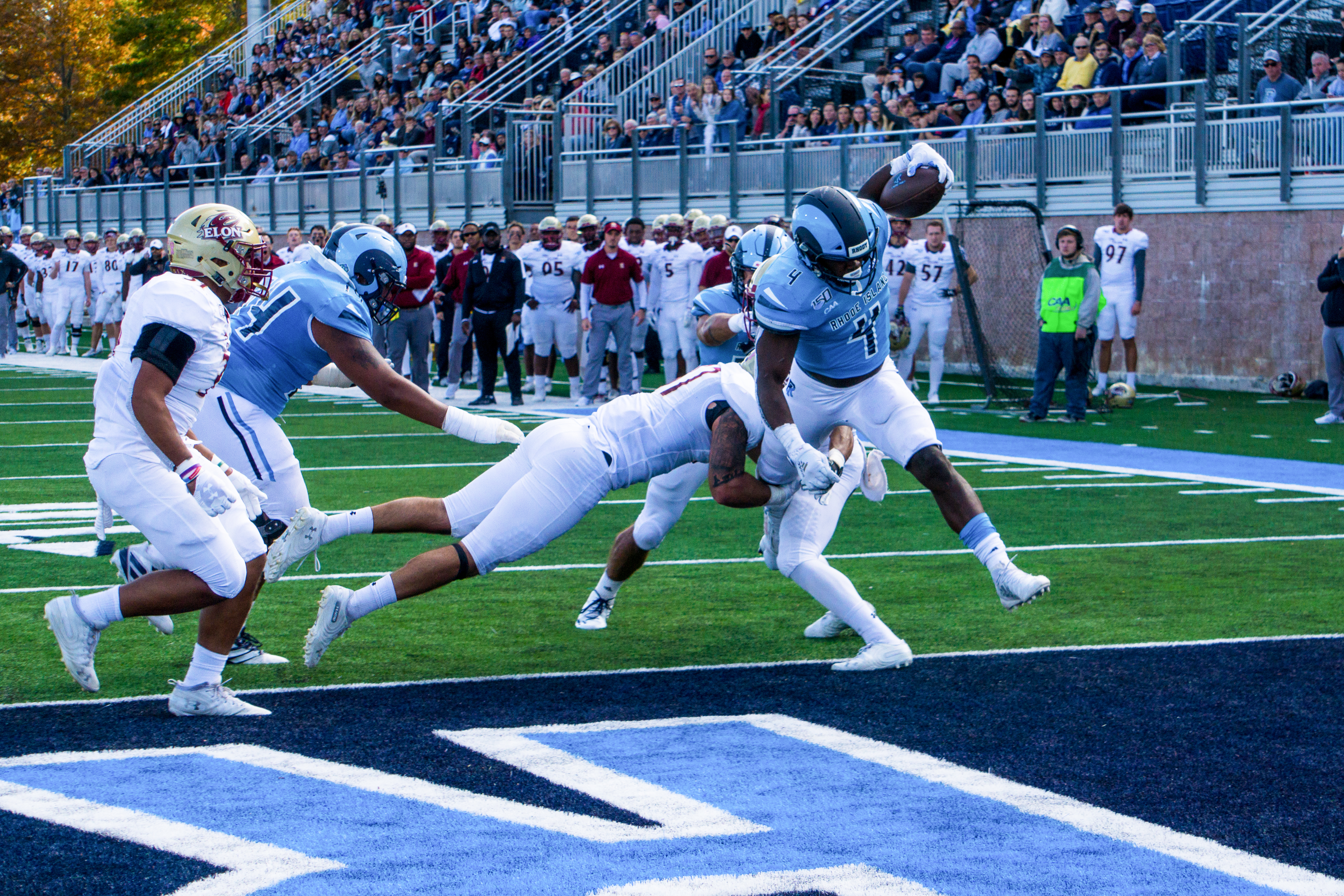 Zoe Bryant Jr. rushes into the end zone for a touchdown. Photo by Ian Weiner.

In front of a packed stadium in Kingston this past Saturday, Rhody Football fell to Elon 38-13, marking their third straight week of defeat this season and eighth year in a row of a loss on homecoming weekend.

The Rams entered the matchup with an overall record of 1-6. Still in search of their first conference win, they faced a 3-4 Elon team who defeated Delaware 42-7 in their last game to even their conference record at 2-2.

The Rams received the opening kick and began the opening drive of the game on their own 25 yard line. Redshirt senior Zoe Bryant Jr. took the hand off and carried the ball for four yards on the first play from scrimmage of the game.

However, the second snap of the game didn’t go the Rams’ way, as redshirt junior quarterback Vito Priore fumbled the snap and the ball was recovered by Elon on the Rams 25 yard line. Turnovers would continue to plague the Rams throughout the afternoon.

“You’re just not going to win with the amount of turnovers we committed,” Head Coach Jim Fleming said.

Elon capitalized on the mistake with a 25 yard touchdown pass from quarterback Davis Cheek to wide receiver Avery Jones and took an early 7-0 lead. The next drives from both teams ended in punts. The Rams’ third possession of the game is when their offense showed some life.

The Rams held the Phoenix scoreless in the second quarter as they inched closer towards the lead. Carrick knocked through another field goal, this time from 32 yards to bring the Rams within one point, 7-6. The field goal was set up by a 60-yard rush by senior running back Naim Jones. Rhody headed into halftime still down by one as Elon received the kickoff.

Things were looking good for the Rams early in the second half. After an Elon field goal to make the score 10-6 the Rams embarked on a five minute, 14-second drive that consisted of 10 plays for 75 yards and was capped off by a Bryant Jr. two-yard touchdown run. Carrick converted the extra point to give the Rams their first lead of the game at 13-10.

Things quickly went south after that for Rhody. Elon responded quickly with a 72-yard, two-minute, 37-second touchdown drive of their own to take the lead back 17-13. within reach, the Rams began their next drive on their own 25-yard line.

Priore was intercepted for a second time on the third play of the drive giving, Elon prime field position after a 31-yard return to the Rams’ three yard line. The Rams struggled to get the ball to standout receiver Aaron Parker, as he finished the day with just three catches for 52 yards far below his average of 119.7 receiving yards per game.

“They had sold coverage on him and we couldn’t get him shook loose,” Fleming said. “Once we were shook loose we couldn’t connect. It’s a coordinated effort between quarterback and receiver, and if the ball is not catchable in some situations, you lose a couple of opportunities that he has had plenty of.”

Elon once again capitalized on a Rhody turnover and punched in a three-yard rush for the touchdown. After the extra point was made, Elon led the Rams 24-13. Things continued to go downhill for the Rams as Elon reached the end zone two more times and crushed any hopes Rhody had of making a comeback.

The final score in Kingston was 38-13 in favor of the Phoenix. Fleming described the game as “just a tough day at the office.”

With the loss the Rams fell to 1-7 on the season. The loss was Rhody’s third straight and it also halted any hopes of finishing the season with five hundred record after entering the year with high hopes after having their first winning season in 17 years last year.

“We had great expectations coming into this year and we’ve had some incredible heartbreak,” said Fleming. “The missed opportunity today was disappointing, to not continue to play well to put yourself in a position to win.”

The Rams will be back on the turf this Saturday when they host Merrimack in a 1 p.m. matchup at Meade Stadium.