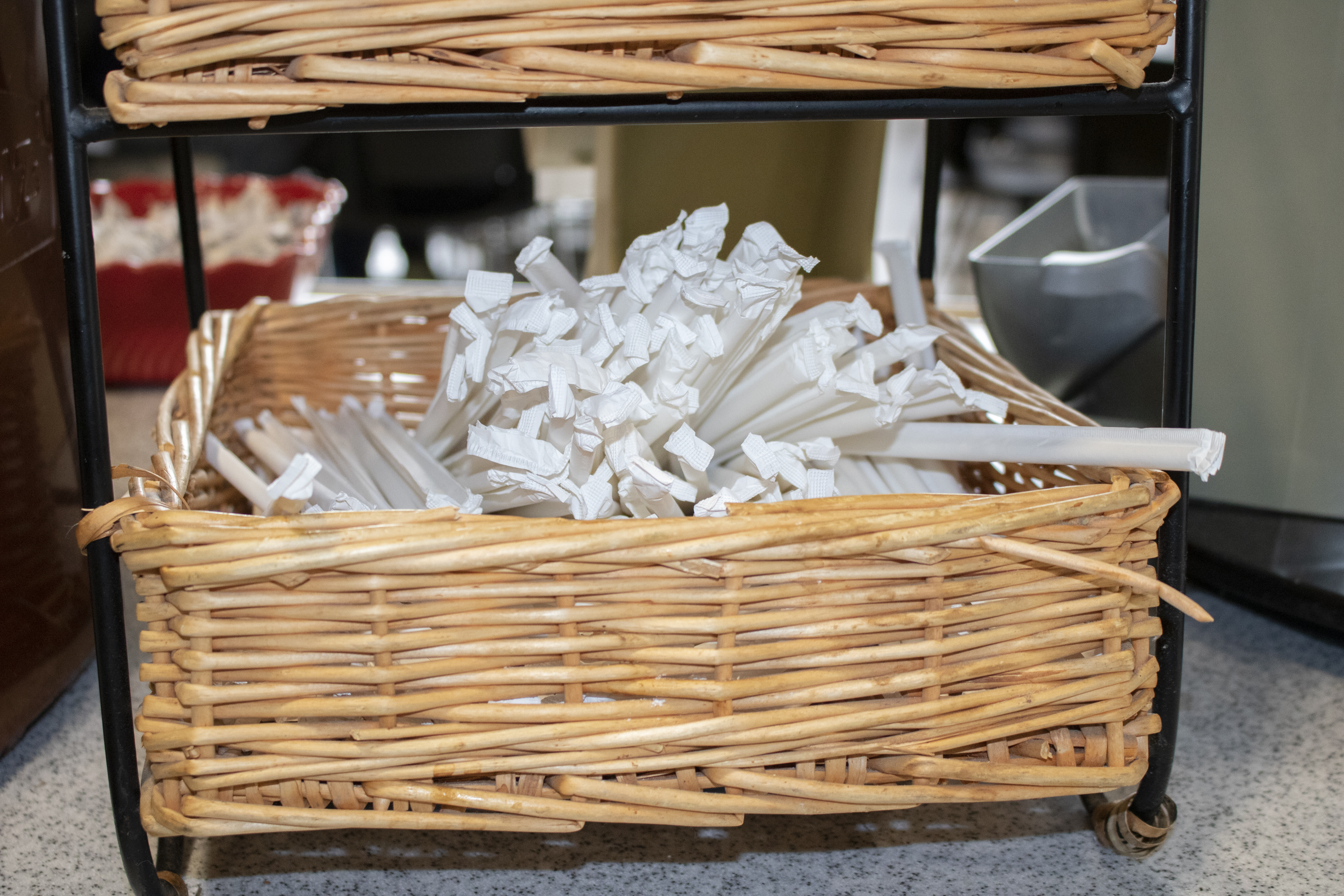 After students had negative reactions to gluten in paper straws, many food services around campus have made warning labels. Photo by Melissa Marchese.

In early October, Karen Orabona, a nutrition specialist at the University of Rhode Island, sent out an email to students with gluten intolerances to warn them that the paper straws on campus contain gluten.

The email was sent to notify others that a student with celiac disease had a reaction to the paper straws available at one of dining services retail outlets on campus, such as Rams Den or Rhody Market.

“Our dining services team, myself included, had no idea that the paper straws we purchased contained gluten,” said the email sent by Orabona. “Please take caution when choosing a straw for your beverage.”

Orabona said that since there were no labels on the box of paper straws, they had no idea they may have contained an allergen.

“We don’t know what is in the straws, there are no label regulations requiring any ingredients listed on the box of straws,” said Orabona.

Even now, Orabona said she isn’t sure what is in the straws or if they contain any other allergens.

“[The email was sent] to advise those students that are sensitive to gluten, that [the straws] may contain or may not, but it may also contain other allergens,” said Orabona. “I didn’t say that in the email. It could or it couldn’t, we don’t know because there’s no labeling required on paper products because it’s not a food.”

Anna-Maria Cruz, a junior at URI with celiac disease, said that despite paper products not being a food item, they should still be required to have a label.

“If there’s an allergen in it, everyone needs to know because you never know how it will affect you,” said Cruz. “This has definitely been an inconvenience for me, [dining services] needs to contact the company of the paper straws to find out what’s really in it.”

Dining services was made aware of this from an email sent from the student who had the allergic reaction, according to Orabona. She said that once she was forwarded that email from the concerned student, she needed to reach out to others who might be affected.

“I believe the concern is that [the student] wasn’t notified [about the allergens in straws] but then again, we had no idea, like any paper product, you have no idea what’s involved in it because there’s no labeling laws requiring any of the manufacturers to put the ingredients of non-food items on the label,” said Orabona. “So there’s no way we could have known.”

Orabona said that to counteract this, managers of dining services retail outlets should be putting signs up saying the straws may contain gluten.

“Like I said, we don’t know what’s in it,” said Orabona. “So for somebody who’s sensitive, it’s up to the student to [take] a straw or not.”

According to Orabona, the student who came forward with concerns about the straws is fine now and the reaction was not severe.

“We take great pride in keeping our students with allergies safe,” said Orabona. “We take all of these situations very seriously. If anything had been known to us, we would certainly have notified students.”

Dr. Christopher Nasin, the medical director and a staff physician at Health Services, said that any reaction from a straw containing gluten should be mild, if that.

“Usually you have to ingest gluten to have a significant reaction,” said Nasin. “Even if a student ingested some of it because [the paper straw] was dissolving, it shouldn’t be more than a really mild reaction [like] cramping or diarrhea.”