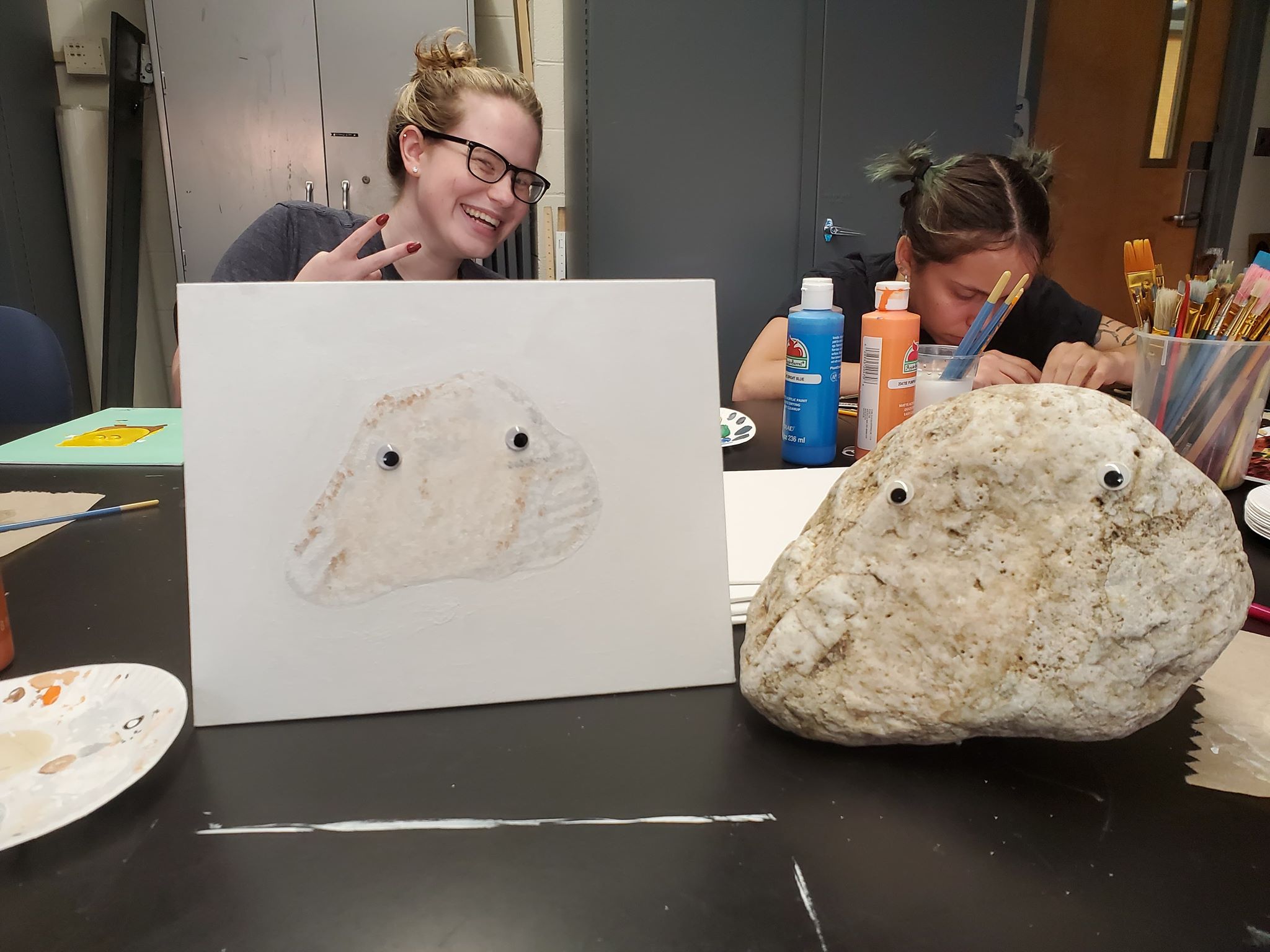 Students in the Geology Club get together to discuss rocks and decorate them. Photo contributed by Geology Club.

The University of Rhode Island Geology Club allows students to get off campus, explore the outdoors and learn more about science.

Catherine Tiley and Mallory McAteer were first introduced to the club as freshmen. Now, they are the President and Vice President of the organization.

“I joined the Geology Club my freshman year in the fall,” said Tiley. “Originally I was an environmental management major and I was in denial that I wanted to be a geology major.”

At the beginning of this semester, one simple activity helped build a community of new students and returning club members from select majors.

“For this year’s [first event] we actually colored pictures of dinosaurs and jarred fish and it was a very nice, close-knit group of people who were really interested in geology,” said Tiley. “In our email list we usually get a lot of environmental management majors, beginning geology students and a few engineering students.”

Since taking on leadership roles, Tiley and McAteer have been coordinating events that can be planned from a few days to a few months in advance. The club wants to be involved with more community outreach projects, such as cleaning beaches in South Kingstown or engaging with younger students about geology.

“We used to go to elementary schools and we were able to educate kids about geology and were just very involved in the community and since I joined as an event coordinator last year, I kind of want to get involved with the campus community and outside community,” said Tiley.

The club does not follow a typical schedule for meetings. The club instead give event notices electronically through email or social media.

“We don’t have set weekly meetings,” said Tiley. “We have paint nights where we paint geologic settings such as the Grand Canyon, plant terrarium nights in [Woodward] and planetarium nights.”

The planning of major club events has lead club members to study geology across many New England states through hiking, camping and visiting relevant museums.

“Most of our events are here on campus in [Woodward] but we also do field trips where we go to [Massachuestts] or New Hampshire or the surrounding New England states and try to explore the geology there on the weekend,” said Tiley.

Study nights have been established by the club within the geology department to tutor students on the subject.

“We work with a few of the geology professors where we have study nights that go right alongside the exams,” said McAteer. “There are some professors and people from the geology club that will help tutor them.”

Tiley and McAteer have one clear goal, which is adding more events than there were in previous semesters.

“I have tried to have events more often because in the past we have had events more sporadically,” said Tiley. “I have been trying an event once every two weeks.”

In the near future, the club has planned to coordinate events with other campus organizations.

“I think we have [done events with other groups] in the past,” said Tiley. “Recently, I know we have talked with people from the board of the Marine Science Society about doing movie nights.”

McAteer said the club is a fun way to meet friends and have a good time.

“I would say it is a very fun club and it is a total destressor,” said McAteer. “You just meet with these nice and calm people for events.”