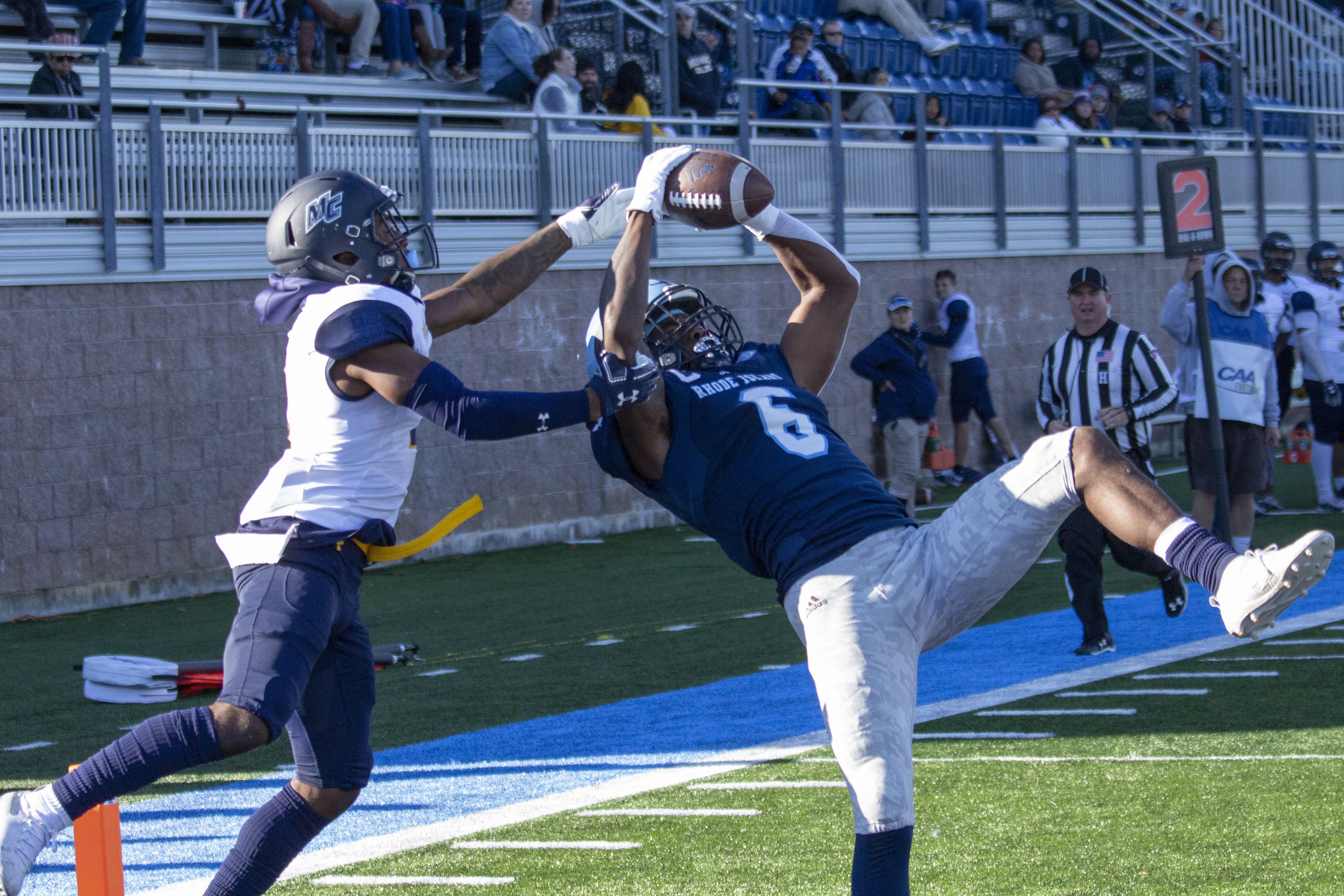 Aaron Parker catches a contested touchdown in the 4th quarter to further URI’s lead over Merrimack. Photo by James McIntosh.

In their second to last home game of the 2019 season and still in search of their first win on their new turf field, Rhody took on and conquered the Merrimack Warriors 42-14 at Meade Stadium.

Rhode Island was looking to get back in the win column against the 4-4 Warriors after having dropped their last three games. After receiving the opening kick the Rams began their first drive on their own 23-yard line that ended in a three and out.

Merrimack took over after the punt and embarked on an almost five-minute drive that saw three penalty flags thrown. On fourth down with one yard to go, Merrimack turned the ball over when quarterback Christian Carter fumbled and it was recovered by Rhody.

The Rams took over on their 30-yard line and sent out freshman quarterback Darius Perrantes instead of starter Vito Priore. Priore was back under center on their next drive and began to move the ball down field. He found senior receiver Ahmere Dorsey for 17 yards, and then a two yard rush by senior running back Naim Jones set up an Isaiah Coulter 17-yard catch and run for a touchdown to give the Rams an early 7-0 lead.

Carter was intercepted by Rashod Dickerson on the Warriors last drive of the first quarter.

The Rams tight defense continued in the second quarter as Merrimack wasn’t able to move the ball. Perrantes was once again under center for the Rams on the following drive as the rotation of quarterbacks continued.

“That was the plan.,” Head Coach Jim Fleming said. “It was time, four games left, there was an opportunity to see a bunch of kids that are younger. They can still hold onto their redshirt and so it was a plan to get him in there and alternate some series and see how it unfolds.”

The Warriors began to show some life on their next drive until redshirt sophomore Malik Gavek forced Antonio Smikle Jr. to fumble. Rhody recovered the fumble but Priore was intercepted on the first play of the drive, which eventually led to a Merrimack touchdown. The Rams went into halftime with a 14-7 lead.

After three and outs by both offenses, Merrimack was looking to do something on their second drive of the half. This ended quickly as on third down and two Carter’s pass was tipped and intercepted by Gavek for a 30-yard pick-six to put the Rams up 21-7.

Merrimack finally gained some momentum on offense on their second drive of the half. They moved the ball down the field slowly but Rhody stopped the Warriors and forced them to settle for a field goal until a hurdling penalty on the Rams gave Merrimack a first down. The Warriors inched closer to the end zone until defensive linemen Andre Bibeault forced Venter to fumble and Gavek recovered the ball.

This added to the already impressive day Gavek was having. He recorded 14 tackles, a pick-six, two fumble recoveries and one forced fumble.

Fleming spoke highly of Gavek after his big day.

“He just needed an opportunity and when he got his opportunity he’s taken it,” Fleming said. “He’s a good example of what we talk about in the coaching world, stay with it and no guarantee a reward but if you’re ready when the opportunity comes and your able to capitalize on it you never look back.”

The Rams kept their foot on the gas on the ensuing drive. Priore found Parker four times for 58 yards and a touchdown to extend their lead to 28-7.

Rhody’s defense kept the pressure on and the offense didn’t slow down either. An 11-yard reception by Parker set up a first and goal on the Merrimack five yard line. Jones bounced the first down carry to the outside and was able to score extending their lead to 35-7.

Parker’s reception was just another one to add to an impressive resume. This was his eighth catch on the day and his 201st career catch, making him the second Rhody receiver to reach that milestone behind Brian Forster’s 284.

His 126 receiving yards also put him over 1,000 yards on the season, making him the first Ram’s receiver to do so since Bobby Apgar in 1994.

“Anytime you’re able to bring somebody into your program that you see potential in and then they’re able to achieve at the high levels he has its very rewarding,” Fleming said.

Redshirt senior defensive back and Rhode Island native Momodou Mbye picked off Carter yet again on Merrimack’s next. Running back Matt Pires ripped off a 66 yard run set up another Rhody touchdown from running back Justice Antrum.

The Rams made it look easy taking home the victory 42-14. The win was their first since they defeated Brown and their first on the new field. Rhody will be back in action on Saturday when they travel to William and Mary for a 1 p.m. matchup.