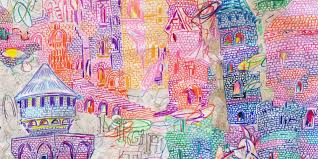 Consisting of bassist Brian Gibson and drummer Brian Chippendale, Lightning Bolt is known for creating walls of head-splitting noise using only the two aforementioned instruments. This style of aggressive and frenetic song structure has placed them within the group of great noise rock bands, many citing albums like 2001’s “Ride the Skies” and 2003’s “Wonderful Rainbow” as landmarks within the genre.

While typically known for their more low-fidelity recording style, “Sonic Citadel” sees Lightning Bolt’s sounds taking a far catchier and more accessible direction. This theme of a more polished sound is an idea the band has incorporated since last album, “Fantasy Empire,” their first album released on the Thrill Jockey label. Lightning Bolt’s sound being “polished,” however, is still a bit of an oxymoron, as you’re still getting the same brand of abrasive ear-candy one would come to expect from the noise-rock titans.

Rather than curtailing their sound in an attempt to make something easily appealable to a mainstream audience, Lightning Bolt embraces their new direction of catchy riffs and sticky melodies by stripping back many of the lo-fi elements. What results is one of the most off-the-wall, punishing and exhilarating listens you will hear all year.

The opening track, “Blow To The Head,” immediately sucks the listener in with its simplistic yet dynamic sound, all the while grounding itself in a consistent structure before breaking down into polyrhythmic chaos towards the last minute or so. “Big Banger,” is another incredibly noisy cut, as Gibson’s bass riffs sound more like a buzzsaw cutting through wood than any traditional instrument. Both of these tracks contain just enough teeth-grinding noise to make it feel distinctly their own.

Some of the more accessible tracks still feel like a psychedelic thrill-ride at every turn. For example, the hilariously-titled “Hüsker Don’t,” feels like an 80’s punk-rock odyssey, with Gibson’s vocals actually taking a rare front seat within the mix. It’s easily one of the most fun rock songs of the year. Another instance of fun insanity on the record is the song “Bouncy House,” and as the name implies, the song feels like a frantic instrumental journey through a carnival at the end of the world.

The album ends on a rather odd note with the nine-minute track “Van Halen 2049.” Easily their most obtuse undertaking on the entire album, the song is an indulgent piece of noisy bliss that trucks through the listener’s eardrums like a battering ram at every possible moment. It’s a step away from their conventional formula throughout most of the album in the best possible way.

The only thing really keeping this album from being perfect, for me, would be the song “Tom Thump,” which feels severely underperformed and empty when compared to the rest of the album.

Still, while their sound may not be for everyone, Lightning Bolt’s “Sonic Citadel” is one of the most crushing and wildest rock albums of this year, adding to Gibson and Chippendale’s legacy as one of the most influential musical duos of the new millennium.