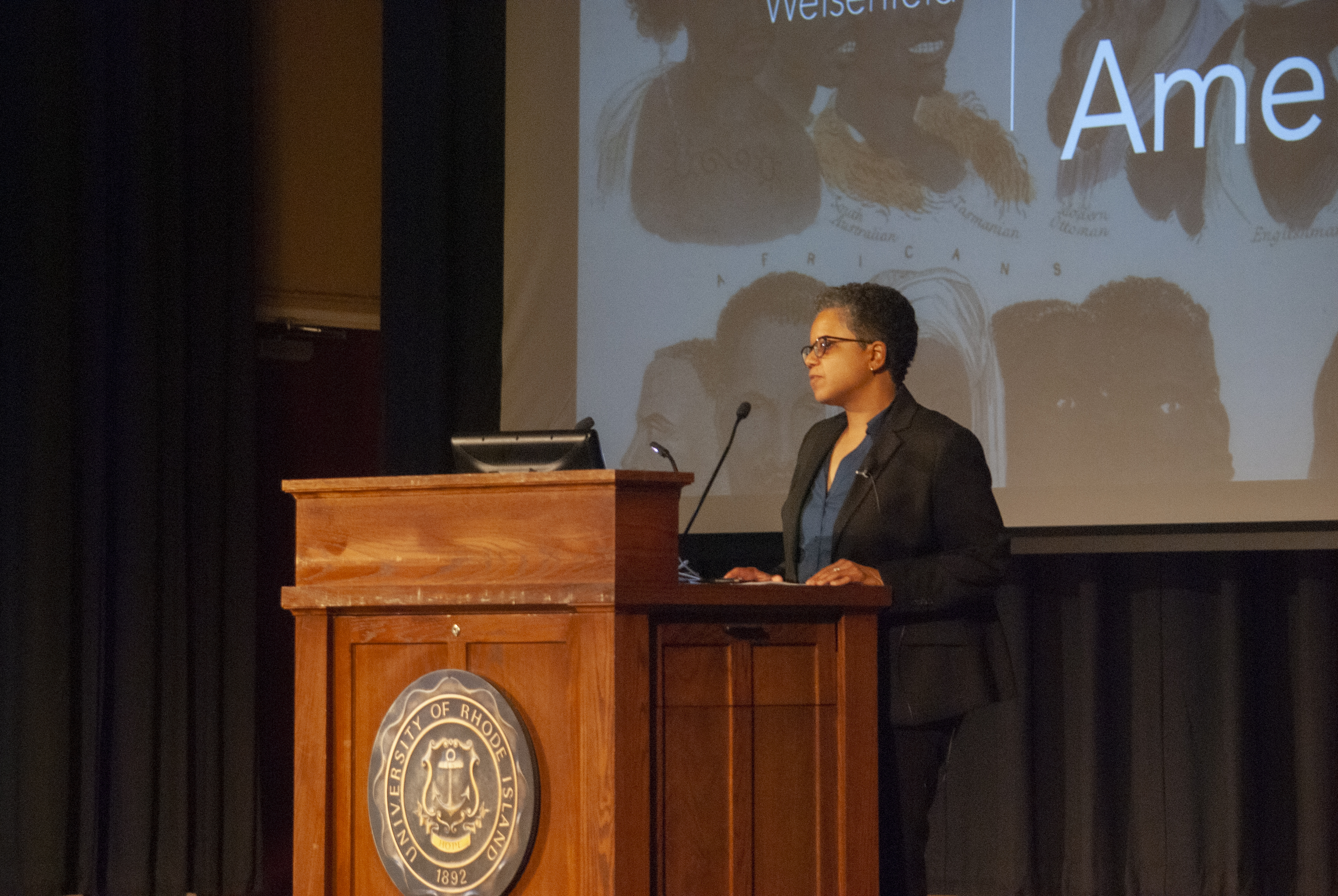 Judith Weisenfeld, a professor of religion at Princeton University, discussed the correlation between race and religion. Photo by James Singer.

The sixth installment of this semester’s Honors Colloquium featured a guest lecturer from Princeton discussing the correlation of race and religion in America on Tuesday night in Edwards Auditorium.

The lecture was given by Judith Weisenfeld, a professor of religion and an associate faculty member in the department of African American Studies at Princeton University.

According to George Gallien, the director of the University of Rhode Island’s multicultural student center, Weisenfeld is also a noted author and religious scholar.

Weisenfeld began her lecture by discussing an incident that occurred in Mississippi in September 2019. According to Weisenfeld, an owner of an event hall refused to allow an engaged couple to use their business for their wedding because the couple was interracial. Weisenfeld said the owner of the business claimed that interracial marriage went against her religious beliefs.

Weisenfeld used this example to show that people have closely tied the concept of race and religion together, despite the fact that race is not explicitly mentioned anywhere in the Bible.

Furthermore, Weisenfeld said that race itself does not equate to a single difference between humans until people use physical appearances to justify unequal treatment.

“First, it is important to understand that race does not differentiate naturally occurring differences between humans,” Weisenfeld said. “It is a framework through which people have invested inconsequential physical differences like skin color with meaning. Skin color does not equal race. Race is an interpretation of skin color that is necessarily connected to hierarchy and evaluation.”

After providing the audience with background information about her view of race as a social construct, Weisenfeld moved into discussing race and religion in the late 19th century and early 20th century.

“It is important to, in this context, not to see the appeals to the Bible as simply after-the-fact justifications for an instituion that is really economical or really polticial, but to think about how to recognize the profound power for white Christians who devoloped the institutions of racial slavery in the Atlantic world of religion and the Bible as primary means to understanding economy, poltics and human relations,” Weisenfeld said. “The Bible helped them to know, from their perspective, what God wanted economic or human relations to look like.”

However, Weisenfeld said that in the U.S., this started to change during the Civil War Era.

“For many African Americans in the Antebellum United States, the Bible served as the framework of understanding different ideas of collective identity, provided different language for peoplehood than that imposed by Chrisitian white supremisitics and slaveholders,” Weisenfeld said.

According to Weisenfeld, as the 19th century turned into the 20th century, some people began describing themselves as either light skinned or dark skinned as an attempt to veer away from a view of someone being only white or black. However, she said this created difficulties.

“Eradicating [the concept of] race in a racialized society is a difficult enterprise,” Weisenfeld said. “They developed a visual strategy to use as another part of this process. Not using racial language was one [strategy], but their visual strategy was meant to disrupt the visual training of members and outsiders to interpret differences of skin color in terms of racial hierarchy.”

Additionally, Weisenfeld said that in the 20th century, when asked for their race on documents such as draft cards, some African Americans simply wrote down that they were human.

Weisenfeld finished the lecture by saying that issues regarding race and religion can still be seen in the U.S. today. She cited controversy surrounding former U.S. President Barack Obama’s religious affiliation during his 2008 campaign as an example. Weisenfeld also said practices such as yoga and mindfulness, which are derived from spiritual practices, have also caused debate recently in certain contexts.

This week’s Honors Colloquium lecture was also part of the University’s Diversity Week Programing. The next installment of the Honors Colloquium will be held on Tuesday, Nov. 12 at 7 p.m. in the Edwards Auditorium.