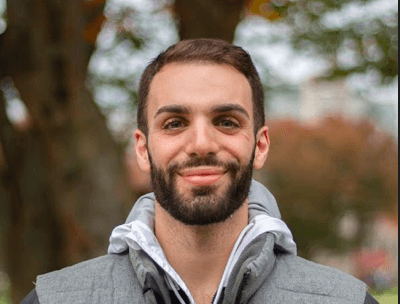 Having grown up with an unwavering love for sports, senior communication and journalism student Josh Turano turned his interests into career goals when he got to the University of Rhode Island.

Turano grew up playing baseball, but after he tore his ACL during his senior year of high school, he vowed to find another way to stay involved with sports. So he became the public address announcer (PA) for some of the high school sports teams.

“I got in touch with our athletic director and he said I could do the PA for the men’s and women’s lacrosse teams,” Turano said. “So I started doing that and I got a lot of positive feedback. The parents loved me. I used to tell corny jokes during timeouts.”

During this time is when Turano realized that he may want to continue sports broadcasting as a career. He continued to work as the PA for other sports and started a podcast with his friends. With this in mind, he applied to URI and immediately looked to join the news station. Turano even practiced recording himself before live broadcasts.

“My freshman year I bought this little $10 headset from Radioshack, and I used to sit in the Hillside [Hall] lounge and I used to talk about sports for a half an hour,” Turano said. “It was terrible. But, then I ended up hearing about the podcast studio in [Ranger Hall] and I started doing it there and my production got a lot better.”

By working on his reporting skills outside of class through outlets such as WRIU 90.3 FM, the campus’s student-run radio station and creating his own podcast, Turano became involved in other publications such as Barstool Rhody.

“I met Tyler Krusz, who ran Barstool Rhody, a viceroy of Barstool Sports,” Turano said. “So, we hosted a podcast. It got really, really big for a little bit of time, and because of that it really made me hone my skills in and I’ve gotten a lot better at what I do.”

Turano said that working at URI’s radio station has also been a source of experience for him, as he has gotten to hold different positions such as sports communications director, assistant general manager and general manager throughout his years at the station.

“I’m currently the general manager,” Turano said. “I’m in a unique position where I’ve had a board position almost every year I’ve been involved.”

Through these leadership experiences, Turano said he has learned a lot of skills that he uses at his current internship at the 98.5 sports radio station in Boston, The Sports Hub.

“I’ve learned that I’m a lot more patient than I am, and I learned that I can do a lot more than I ever thought I could,” Turano said. “I’ve learned to focus on one thing at a time, and to just keep going. And, it’s helped me in the internship I have now as a production intern, because a lot of the stuff I’m doing now, I know because I self-taught myself.”

Turano said that he enjoys getting to teach younger students, the same way he was taught when he began at the radio station. He tries to be a role model to the other students because he had so many to look up to when he started, and that helped him land internships.

“I can be like this father figure to those kids that just started and it’s super enjoyable and really rewarding because when I was in their position I looked up to Stone Freeman,” Turano said. “And if it wasn’t for him, I wouldn’t be where I am now.”

Junior public relations and sports communications student Kevin Wehner said he has enjoyed his time working with Turano on WRIU, and is inspired by his constant energy and determination.

“He embodies work ethic,” Wehner said. “He’s motivated but also always has a smile on his face. He really cares beyond professional relationships but as friendship as well. I have learned a lot from him.”