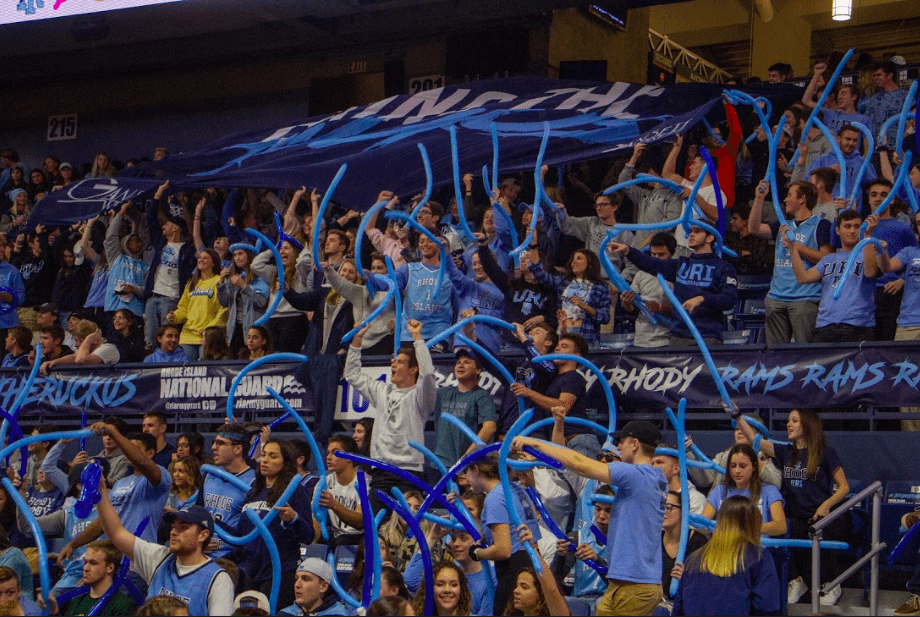 Professor Jody Lisberger and Director of Athletics Thorr Bjorn are hoping to get more students to watch women’s sports. Photo by Greg Clark.

One gender and women’s studies professor at the University of Rhode Island has recently pushed for URI athletics to market women’s sports with the same frequency and tactics they use to market men’s sports.

The professor, Jody Lisberger, started this after she saw a cutout of men’s basketball player Fatts Russell at the Anna Fascitelli Fitness & Wellness Center advertising the team’s first home game of the season.

“To me, I instantly saw, [and said] wait, where’s the other half,” Lisberger said, with the other half being the missing cutout of a women’s basketball player advertising their first game.

She immediately emailed Thorr Bjorn, the University’s director of athletics, about the issue. Bjorn brought the issue up with the marketing team, who began to make cutouts of women’s players as well.

“If that’s going to work on the men’s side [as a means of advertising], let’s try it on the women’s side too,” Bjorn said.

Bjorn is aware of the gender divide when it comes to interest and popularity in sports at both the University and professional level. At URI, there are 18 varsity sports teams, 10 of which are women’s teams and eight of which are men’s teams. However, there is still more popularity and interest around the men’s teams, particularly in regards to the basketball team.

URI’s women’s basketball team just hired a new coach, Tammi Reiss, and the team went 2-0 in their first two games for the first time in 17 years. Bjorn is hoping that the change in coaching and the team’s recent success will spark more interest from URI’s community.

“I think we have some amazing female student-athletes,” Bjorn said. “I think when people start watching them compete, getting to know them and getting access to them, I think they’ll really have a great experience with it. What we want to do is give them a chance to be successful and build some pride on campus.”

Lisberger also recognized the gender differences between the representation and popularity of the teams at URI, and believes that marketing plays a factor in that. This is why she was willing to say something and attempt to make a change. However, having studied and taught gender and women’s studies for years, she understands there is a deeper cultural issue at hand.

Lisberger cited the presence of hegemonic masculinity in sports as a reason for a lack of marketing and viewership of women’s sports. Hegemonic masculinity is defined as a practice that legitimizes the belief that men hold a dominant position in society, in sports as a reason for the lack of and slow movement of change in both marketing and viewership of women’s sports. Lisberger said it is important to invest time and money into a women’s team to help women’s sports become more popular.

“Build it and they will come,” she said. “Success follows money. You upgrade something then it’s going to be more appealing.”
That’s exactly what the athletic department hopes will happen with this new marketing campaign, where they will be adding cutouts of women players across campus for the next women’s basketball home game.

Lisberger said that there’s always room for improvement, which is why she sent an email to the marketing team when she saw the lack of a women’s advertising cutout.

In the cut out of the women’s player, she is posing with the basketball, opposed to the one of Fatts Russell in action during a game. Lisberger said that this plays into a dangerous stereotype of women being passive in comparison to men.

The women’s basketball team will be playing their next home game against Vermont on Monday, Nov. 25 at 7 p.m. at the Ryan Center.