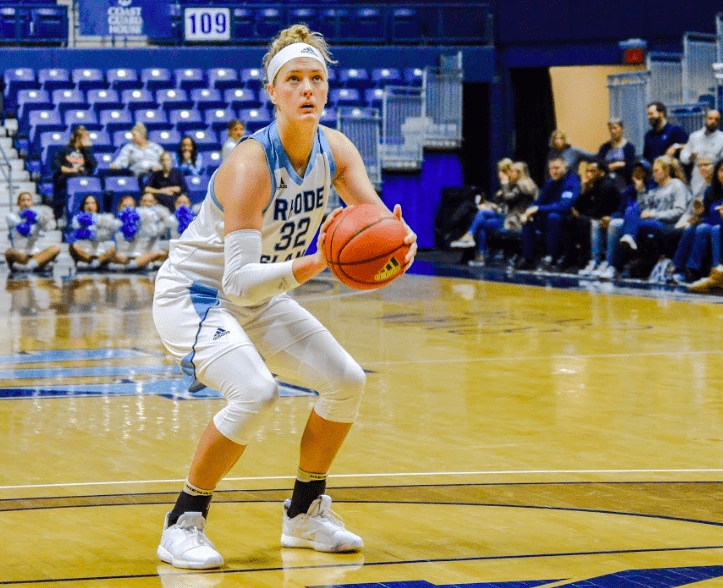 Nicole Jorgensen eyes the hoop as she begins her shot. Photo by Ian Weiner.

“Being a low-block scorer that can pound, that’s a lost art nowadays because now every kid wants to face up and play soft and shoot jumpers,” said women’s basketball Head Coach Tammi Reiss.

That’s high praise for senior Center Nicole Jorgensen, who has been one of the cornerstones of the Rams women’s basketball team the last few seasons.

Jorgensen first got involved in the game of basketball back in the fifth grade because of her height.

“I was about six feet tall in the fifth grade and everyone thought that I’d be really good at it, so I tried out and I was awful,” joked Jorgensen. “Then it came with time and practice.”

It sure did come around for her. At Quincy High School, she scored 1,274 points and snagged 1,159 rebounds as a four-year varsity player for the Presidents. She also holds the single-season record and career record for blocks at Quincy.

During her senior year of high school, she decided to come to URI because of how close it was from home.

“It was the closest to home with the most family setting, but things obviously changed with the new coaching staff,” said Jorgensen. “But if I had the same opportunity with the coaches we have now, I would still choose here.”

Reiss relishes the opportunity of having a player like Jorgensen on her team.

“Anytime you have a player that is very talented and very skilled, as Nicole [Jorgensen], first and foremost it’s a great relief because you can run a lot of your offense through her knowing you’re going to get a high-quality shot,” said Reiss.

She also praised the way Jorgensen is as a person.

“She’s like a gentle giant,” said Reiss. “She can be rough around the edges, her heart is a heart of gold.”

On Nov. 10, against Hartford, Jorgensen became the 22nd Rams women’s basketball player to score 1,000 points in her career. Having scored 1,000 points in high school, she was pleased in having the opportunity to accomplish it again in college.

“It feels pretty good,” said Jorgensen. “I mean I did it in high school too, but I never thought I’d have the opportunity to do it in college.”

Although this was a huge accomplishment for her, she is still looking to accomplish more.

Jorgensen and the rest of the women’s basketball team will be making the journey up to Boston to face Boston College tonight at 7 p.m.