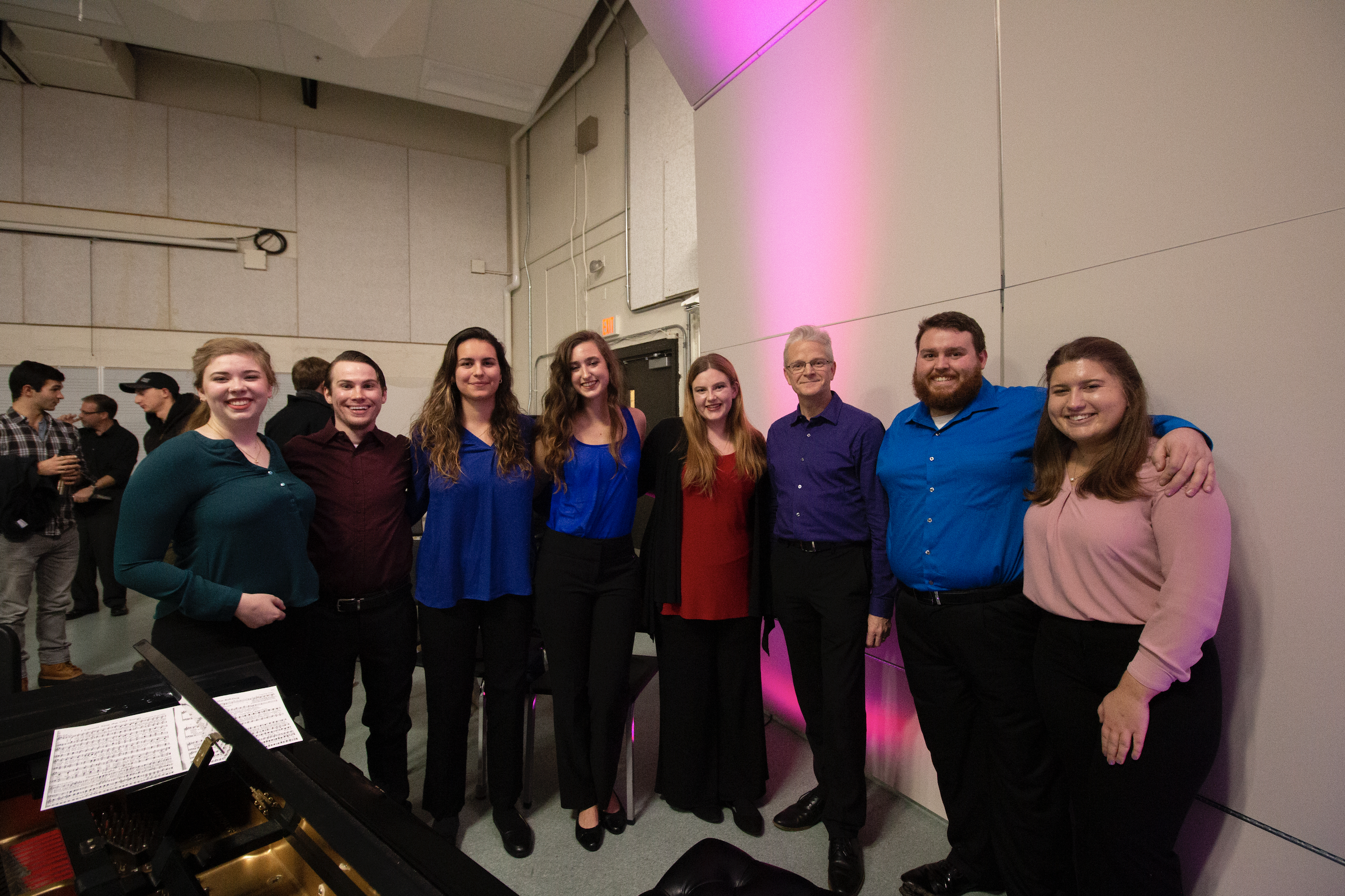 The vocal group Lively Experiment sang songs from 1919 earlier this week in the Fine Arts Center. Photo by Grace DeSanti.

Lively Experiment, a small choral concert conducted at the end of every semester at the University of Rhode Island, took place at the Fine Arts Center, on Dec. 2 at 7:30 p.m.

Various music majors across all disciplines came together to perform songs from the year 1919, which was the theme of this concert. The vocal chamber explored songs from a hundred years ago, organized and conducted by Mark Conley, chair of the music department and director of choral activities.

“1919 was exactly a hundred years ago and it was a real dividing line,” Conley said. “In 1920, the radio was invented, the electric recording process as opposed to the acoustical process, women got the right to vote. In many ways, 1919 was the very end of the 19th century and the dawn of the 20th. I wanted to show ‘modern people’ what life was like a hundred years ago and what it was like to be alive back then.”

The concert had an unusual and informal setting, with a round seating set-up for the audience and students singing from various parts of the room. A gramophone from the 1920s, popularly known by the brand’s name Victrola, was placed in the corner, playing songs from a collection of old vinyl.

“We always include the audience and try to demystify the process,” Conley said. “We try to break the line between the audience and the performers which is why we did it in the round so everyone could feel like they were in the living room; some singers facing you, others backward to you. But you feel like you were in the room in 1919 and that was the idea.”

Conley emphasized that the program aimed to celebrate the close connection of the 19th century with nature and bring out the transition between the Romantic era and the Modern (20th-century) era.

Songs such as “New Life” by Adam Gabriel, “Good News, Ladies” from The Suffrage Songbook, “Peace I Leave with You” by Mrs. H.H.A Beach, “The Busy Lark” by George W. Chadwick and other compositions from well-known musicians from the era were performed.

Other songs that were performed were also based on the role of women in American society before the 1920s, life during World War I, and the holidays in the year 1919.

The concert began and ended with Conley’s own composition called “Home,” which was inspired by a poem written by Carl Sandberg in 1916, called “Here is a thing my Heart wishes the World had more of.”

“The music from 1919 was so fun to sing but also challenging,” Elise Felker, a senior Music Education major said. “We had to be really diligent and self-disciplined because we had to learn our solos on our own. I think learning ‘Home,’ the piece that Mark wrote, was the biggest challenge because it was seven parts. They were all timed differently because they sound like they were all clashing.”

At the end of every semester, Lively Experiment conducts concerts with different themes that often excites and challenges the students. The theme of the concert in the spring of 2019 was “1960s avant-garde.”

Felker also added that the interesting part about the concert and the rehearsal process is learning about the history and evolution of music over time, and getting to collaborate with new vocalists and other pianists within the department.