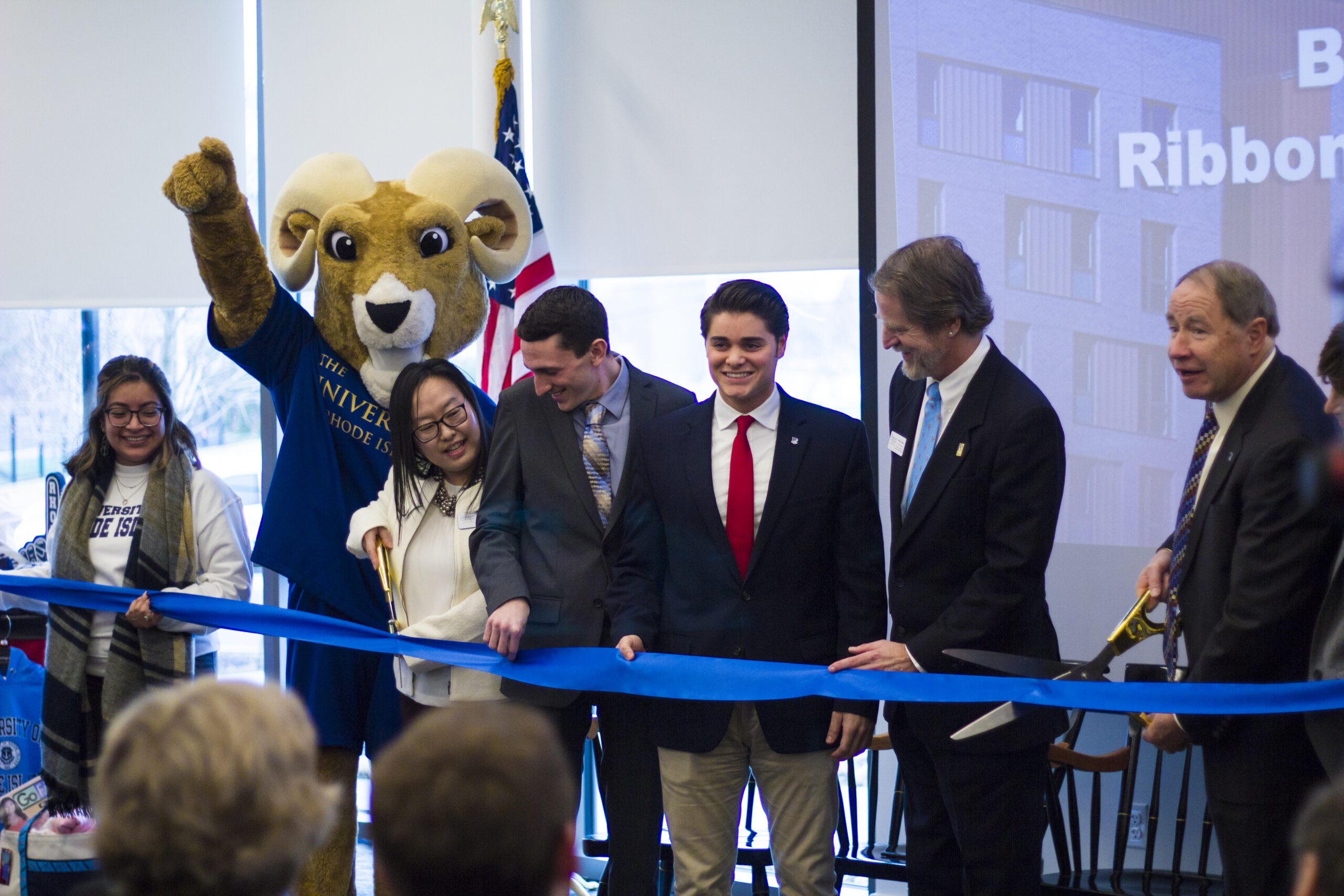 Members of the URI faculty and student body commemorate the grand opening of the Brookside Apartments. Photo by Greg Clark.

Brookside Hall officially opened its doors this past Monday at 11 a.m. with a ceremonial ribbon-cutting and reception.

The apartment-style residence hall has been open for residents since the start of the semester. However, the ceremony was its official opening, as well as an opportunity for some of the University’s leaders to speak about the construction project. Vice President of Student Affairs Kathy Collins introduced the ceremony,  and University President David Dooley, Housing and Residential Life Director Frankie Minor, Student Senate President Nick Marotta, Community Leadership Board President James Cocozza and Brookside Hall Director Nam Kim all made statements.

This is the second major building project completed in two semesters.

“It was just four months ago that we had the ribbon-cutting ceremony for the Fascitelli Center for Advanced Engineering,” Dooley said. “This is similar, a transformational, world-class, signature project for the University of Rhode Island.”

Dooley also announced during his speech, after noting other buildings URI has constructed in the past decade, that the University “soon will have a world-class fine arts facility.”

Several speakers noted how the building is energy-efficient and environmentally-friendly.

“We strive for our buildings to be sustainable,” Collins said. “This building is no exception. We’re on track for LEED Gold certification.”

LEED, which stands for Leadership in Energy and Environmental Design, is a national certification developed by the U.S. Green Building Council. According to their website, Gold is the second-highest certification that a building can get.

“In addition to being the president of the University’s student body, I also study landscape architecture and community planning, which instills in me a great appreciation for a building project such as this one,” said Marotta, who reflected upon the issue of environmental sustainability in regards to the new residence hall. “In our field, the concept of sustainable design seems to be the only way forward for our world, which is facing an existential threat from climate change.”

Minor spoke of the importance of balancing private and public life and how this building’s design represented that.

“We know our students want privacy, many having their own rooms at home,” Minor said. “We also know that they need to be part of a community. The apartments provide that privacy while the ample public spaces on the floor encourage group study and dynamic interaction to create a sense of community.”

Also often repeated was how much the students residing in the building have said that they enjoy their living situation. Multiple speakers, mostly Cocozza, quoted residents who are very happy with Brookside.

Minor also joked that “there is no age limit for enrolling here” to the crowd, most of whom were already college graduates.

“It is as good a facility as you will find on any campus around the world,” Dooley said.

The event received a higher turnout than expected, as Collins noted that it was standing-room only before the event even started.

“We’re so pleased you’re all here and yet surprised by the large attendance,” Collins said. “We rarely see so many people at the opening of a new residence hall.”

Every attendee also got a tour of the building and a look at some of the apartment-style complexes following the presentation. Additionally, attendees received a free water bottle and refreshments from the newly opened Brookside Bistro.