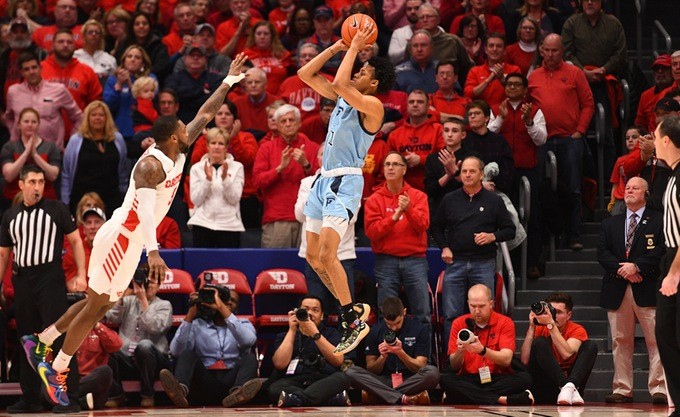 The Dayton Flyers are good.

With all the momentum in the world in the form of a 10-game winning streak, Rhode Island Men’s Basketball’s Tuesday night match-up with the No. 6 ranked Flyers was a serious needle moving opportunity. Instead, the much heralded squad from Ohio led by All-American Obi Toppin very much showed their potential of punching their ticket to Atlanta and being a final four team this upcoming April.

A 17-0 run over the first five minutes was an initial hit URI was never able to rise from. While the Rams played the rest of the game to a 67-64 advantage, the Flyers making their first seven shots was too much in the hostile environment that is UD Arena. It was apparent that, for good reason, Dayton was simply in a class of their own. The Flyers are undefeated in conference play as they sport 11 Atlantic 10 wins and have only two losses on the season overall, neither of which came in regulation play. On a substantial winning streak of their own, Dayton has now won 13 in a row, and has an undefeated home record of 14-0. Toppin would lead all scorers with 22 points, also adding 10 rebounds to secure the double-double. The “Robin” to Toppin’s Batman, Jalen Crutcher, provided a virtuoso performance to the tune of 21 points and six rebounds. Crutcher would shoot 5-7 from the field, and go a perfect 9-9 from the charity stripe.

For URI, it was a poor shooting night that hampered them from having a chance. The Rams shot just 28 percent from the field, and an even worse 20 percent from beyond the arc. Fatts Russell would lead Rhode Island in scoring as per usual with 19 points, also adding four assists and two steals. Forward Cyril Langevine would tally a double-double, scoring 10 points and grabbing 13 boards, while swingman Tyrese Martin would score 15 points and grab another eight rebounds.

The perimeter match-up was crucial going into this game as well, with Rhode Island sitting at seventh in the nation in three point field goal defense, only allowing opponents to shoot 28.2% from beyond the arc. The potent Flyers offense entered Tuesday’s game ranked first in the A-10 and 30th in the nation in three point field goal percentage, hitting 37.1% of their attempts from deep. For the game, URI did a good job of limiting Dayton from three, as the Flyers shot only 26.3% from three for the game. However, Dayton started 3-3 from beyond the arc, all coming within that monumental opening run.

While it was evident throughout that Rhode Island didn’t have the performance they needed to upset the Flyers, the refereeing for the game was, for both sides, questionable at best. For a game that had the feel of a normal physical game against a conference rival, looking at the box score would leave someone to believe it was teetering on the edge of an all-out brawl. There were seven combined technical fouls, four of which came on Rhode Island. For the game there were a combined 50 fouls, which took all rhythm or pace out of the contest.

While a loss is a loss any way you paint it, URI was essentially playing with house money in UD Arena. This loss in no way should seriously impact the Rams hopes for March, as they still remain very clearly the second best team in the Atlantic 10 with a conference record of 10-2, and sit at 18-6 for the season. The Rams also have a lot to benefit from this loss, with Dayton still having to return the favor in early March when they visit Kingston for the only time this season. While URI’s defense allowed the Flyers to rush out early, the next 35 minutes Rhode Island dug in and kept themselves in the game. Dayton was below their season average in this contest for assists, field goal percentage, three point field goal percentage, and had a total of 14 team turnovers, also above their season average.

Rhode Island now sets their sights to a home date with the Saint Joseph’s Hawks Saturday afternoon. The Hawks and Rams met earlier this season in Philadelphia, with URI edging out St. Joe’s 71-61. The Hawks are one of many landmines remaining on the schedule for Rhody, as they have a record of 4-20 and are a paltry 0-11 in A-10 play.