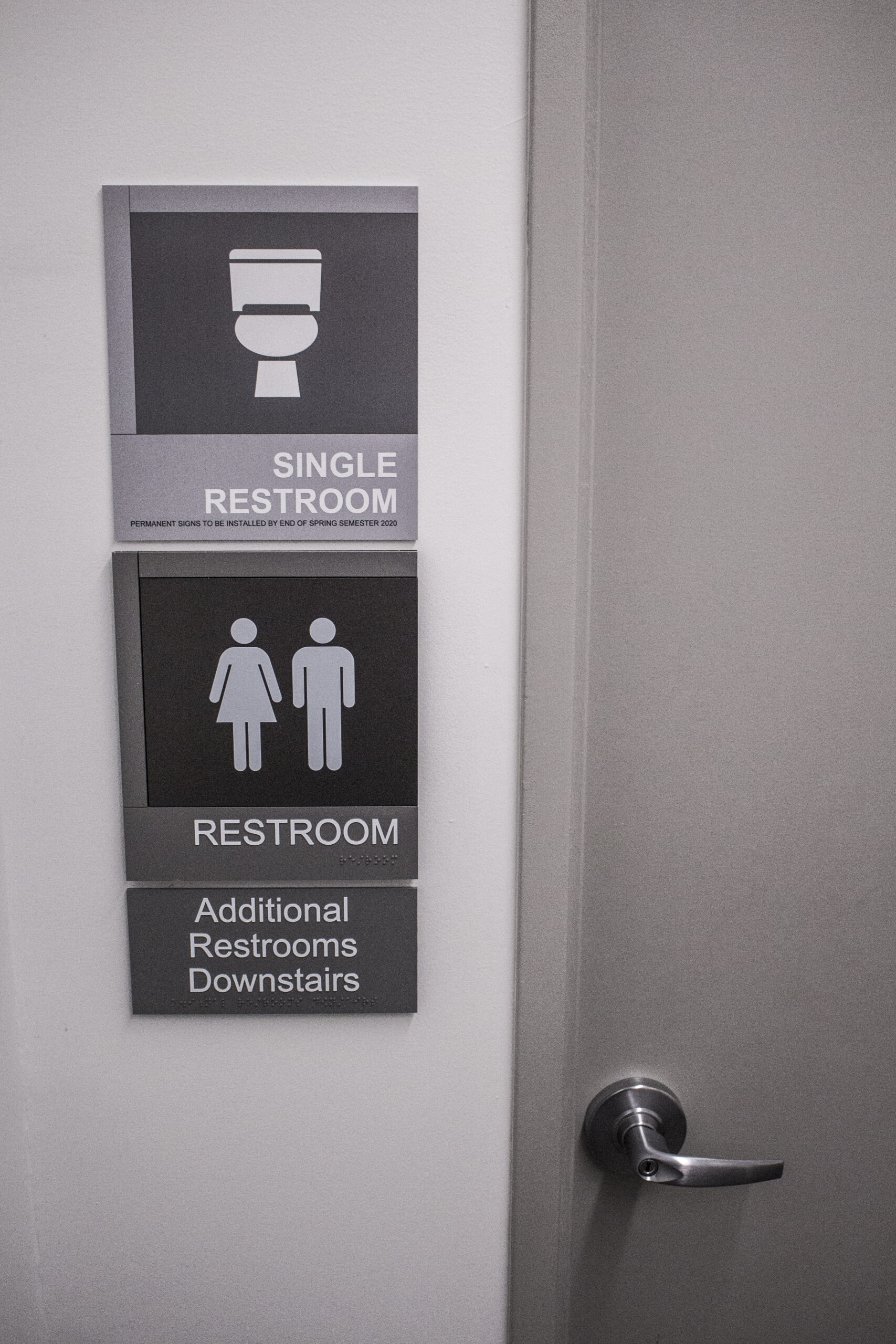 The university has relabeled single use bathrooms across campus after protest by gender rights activists on campus. Photo by James McIntosh.

The University of Rhode Island will convert over 100 single-occupancy restrooms on campus into gender-inclusive ones after a student protest last November.

The student-led demonstration on the Quad encouraged the University to expand its initial two-phase plan for installing gender-inclusive restrooms to a three-phase one. In addition, single-occupancy restrooms in buildings such as the Fine Arts Center, Davis Hall and the Chafee Center for Social Sciences now have temporary signs designating the restrooms as gender-neutral. The University will add permanent signs by the end of the semester. The initiatives will ultimately create at least one gender-neutral restroom in every building on campus.

“The speed with which it has happened is directly in response to the protest,” Annie Russell, director of the Gender and Sexuality Center, said. “Those temporary signs would not have gone up without those students doing that. In fact phase three was not even planned until they did that. They get all the credit.”

The President’s LGBTQ+ Commission has also pushed for gender-inclusive restrooms, and President David Dooley supported the initiative. However, the commission was disbanded last year due to an external review of the Office of Community, Equity and Diversity, which handles much of the University’s commitment to social justice. Because of this, students and student organizations such as SAGA (Sexuality and Gender Alliance) began to advocate for the facilities.

“None of us [administrators] were formally pushing this effort forward anymore [since it was disbanded],” Russell said. “And that’s when the students came to me and said, ‘we are sick of this and we are not going to wait anymore.’ We’ve had students for years who are planning their schedules around where they can go to the bathroom and when, and that is unacceptable. I think once students finally told their stories and administrators were hearing them, it became clear that there was no more time to wait.”

Students have requested gender-neutral restrooms on campus for nearly a decade, according to Russell. However, Rhode Island laws that required an equal number of men’s and women’s restrooms unintentionally prevented the University from moving as quickly as they would have liked.

“Thankfully the state was not against us making changes,” Russell said. “They didn’t even realize that their policies were exclusionary. So we went to their board and asked for exceptions and they approved every time we went. I think it was just a series of unfortunate events that kept us from making significant progress for a very long time.”

Currently, there are about 40 gender-inclusive restrooms on campus. According to Vice President of Student Affairs Kathy Collins, every residence hall has at least some single-use restrooms that are considered gender-neutral. Newer buildings such as the Fascitelli Center for Advanced Engineering, the Beaupre Center for Chemical and Forensic Sciences and the Welcome Center all have inclusive facilities. In addition, any new buildings constructed on campus will have gender-inclusive restrooms.

Collins has supported gender-neutral restrooms since she was first hired in 2012. She is excited to see the movement grow.

“During my time at the University, this is something that has been amazingly important to our students and their experience here,” Collins said. “I am so proud of the progress that the University has made in the past year, meeting the needs of all of the members of our community.”

Daisy McNamara, a first-year student who identifies as non-binary and uses she/her pronouns, said that while she has not felt uncomfortable using gendered restrooms, some of her friends have told her that they personally have. Some of McNamara’s friends who identify as transgender or non-binary had to walk to the opposite side of campus in order to use a gender-neutral restroom without judgement.

“It makes things a lot more convenient,” McNamara said of the increased accessibility to gender-inclusive facilities. “Students who present in a nontypical way can receive backlash when trying to use the restroom, so having a safer option is very good.”