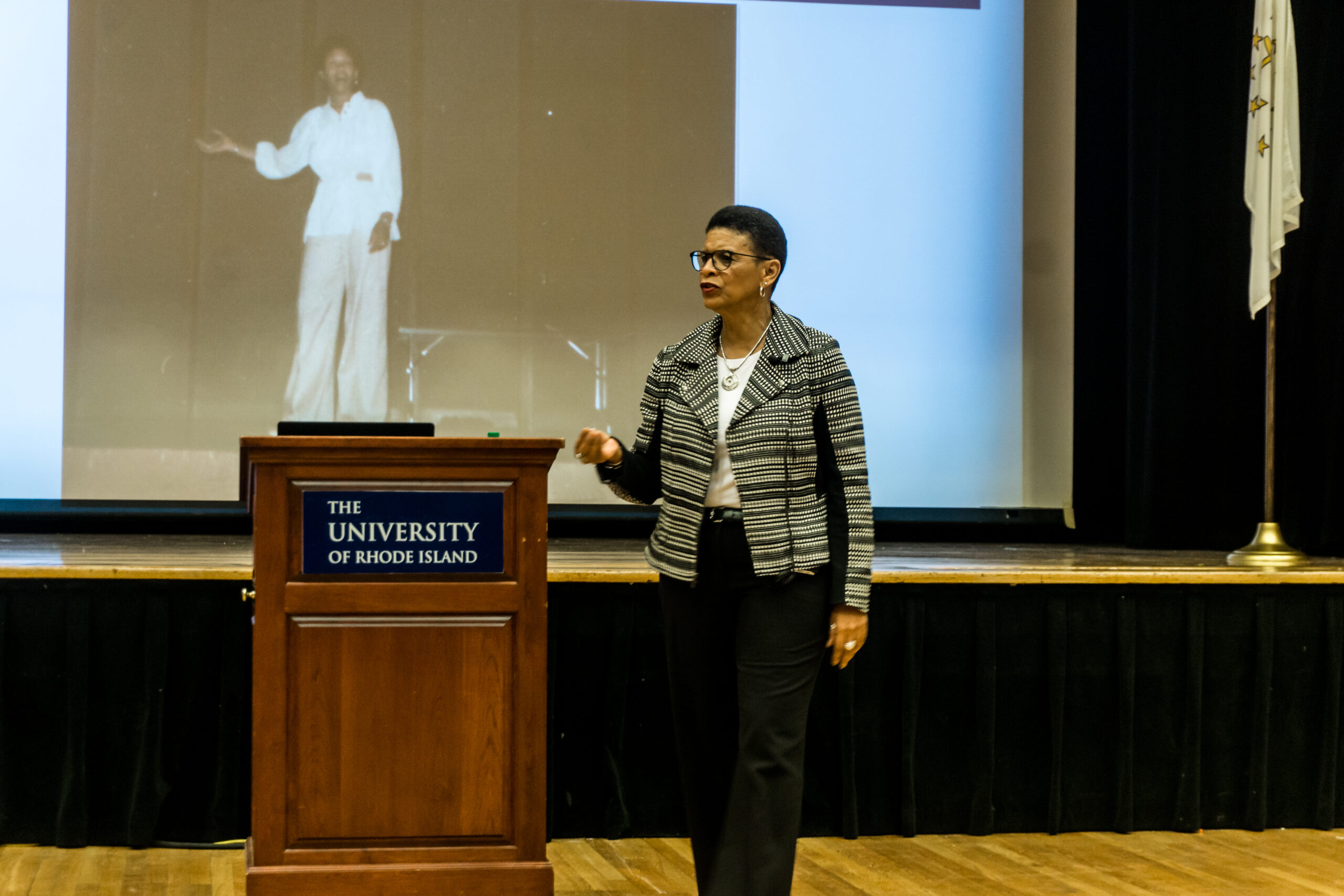 The top applicants for the position of Chief Diversity Officer conduct open forums to connect with the community. Photo by Greg Clark.

After a national search, the University of Rhode Island hosted community forums with the final three candidates for the Chief Diversity Officer (CDO) position on campus this week.

The CDO position is an associate vice president role within the University’s senior leadership team. The CDO also oversees the Office of Community, Equity and Diversity (CED) on campus.

The CDO candidates were Amarildo Barbosa, Sylvia Spears and Mary Grace Almandrez.  Barbosa is currently the CDO at Lesley University. Spears is currently the Vice President for Equity and Social Justice at Emerson College. currently serves as the interim CDO after the previous CDO, Naomi Thompson, left in 2018. Previously, Almandrez served in multiple roles at Brown University, including Dean of Students and Director of the Brown Center for Students of Color.

Each candidate had their own campus-wide forum, as well as the chance to interview directly with campus departments that the CED works closely with. The forum asked the candidates to give a 20-minute presentation and then allowed a 20-minute session for community members to ask questions.

The candidates were tasked with presenting on the following criteria, according to the CDO Search Committee: “in 2017, the University of Rhode Island created a strategic plan for Community Equity and Diversity; describe your understanding of the plan and how you would work collaboratively across the University to lead URI toward inclusive excellence.”

The strategic plan was developed to provide an outline of goals for the CED to achieve in order to make the University a stronger, diverse community that prioritizes equity and social justice. Candidates responded to what was outlined in the plan and how they would work towards achieving and bettering that work.

Barbosa was the first to present on Feb. 12. He began his presentation by asking the audience members to consider the question “why is diversity and inclusion important to your role?” He then asked audience members to pair up and discuss how it impacted them, then asking a few individuals to share their conversation.

“Folks have touched on different aspects of what this means to them,” Barbosa said. “I’m sure if we went around and heard from folks we’d hear some overlap, but we’d also hear some differences. One of the key points is the recognition of how we apply this is going to look different. We have to engage not just at an institutional level, but also at the university level.”

Spears, an alumna of URI, presented on Feb. 13. Spears cited URI as the place where her work in diversity and inclusion began. She used her presentation to review the strategic plan and comment on how the University can continue to excel.

“Here’s what I believe from what wasn’t said [in the strategic plan]; the CDO role is complicated,” Spears said. “It’s complex. It has nuance in it and it requires knowing when to lead, when to facilitate gently, when to be a resource and when maybe just to exercise all the influence that you humanly possibly can exercise.”

Spears also emphasized that change has to happen throughout different levels in order to be productive.

“We have to be aware that change occurs at least on three levels: personal, some would argue interpersonal, sociocultural, and then structural and systemic,” Spears said. “If we just do the work around the personal, I can create the most culturally fluent team in the world, in an environment where the structure is not supported. We can create an incredible structure aligned with inclusive excellence and then not provide people with the tools they need for it to be effective. We have to be toggling through those concentric circles all the time because that’s how change has to happen.”

Almandrez presented on Feb. 14. In her presentation, Almandrez began by introducing herself and explaining that she is a 1.5 immigrant as she was born in the Philippines, but moved to the U.S. as a child. She has a deep connection to the experience of diversity and identity on campuses because of her upbringing.

“I also want to point out that I’m very clear of when I’m on campus my presence as an ambiguous brown woman,” Almandrez said. “No matter what campus I’m at people can’t figure me out, and that seems to be an issue for a lot of people. Even this notion of who is this ambiguous brown woman, already presents a very racialized experience for me. I am very conscious of how people perceive me and how I operate in the world.”

She continued on in her presentation addressing the CED strategic plan. According to Almandrez, to fully understand the plan, she had to “pay homage to the legacy of activism at URI.” To do this, her presentation looked back at URI’s history, examining events and structures such as the Equity Council, the historic takeover of the Carlotti Building in 1971 and the institution of the permanent CDO position in 2012.

“An area where we can stretch and grow is to think about systemic change,” Almandrez said. “Within the plan, we have avenues and strategies for minoritized individuals to navigate the system. What I say is, let’s throw out the system. What would it look like for a student to just be a student and not learn the art of the hustle to make it through it? Let’s push the institution to make more equitable and equitable-minded structures.”

According to Collins, the search committee will be meeting together soon to evaluate the feedback received from community members. After this, the strengths and weaknesses will be brought forth to President David Dooley as the final step.