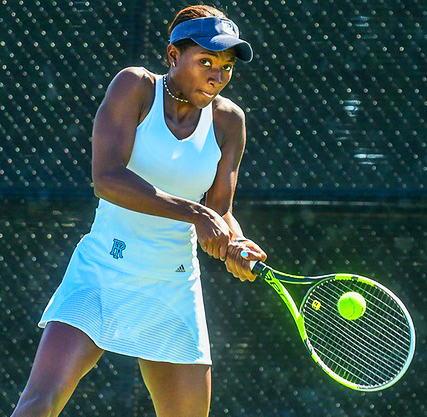 The Rhode Island Women’s Tennis team picked up its first win of the season this Saturday when they took on Atlantic 10 foe, Saint Joseph’s, walking away with a 5-2 victory.

The team started the contest on an uphill climb, being short handed and having to concede a point to the Hawks. Rhody was able to overcome being short-handed, as they took all three matches by the scores of 7-5, 6-1 and 6-2.

The singles only continued to build off that success as each of the top four singles players for the Rams took home victories.

Sophomore Erin Chratian took on Amanda Nava in the No. 1 singles match, where the two went at it in the first set. Ultimately, Chratian was able to break serve and take the set 6-4. The second set seemed to find Chratian in a groove, as she quickly finished off Nava, winning 6-2 and finishing the match in straight sets.

Tiara Higuchi rode the momentum sparked by the doubles and by Chratian and continued the success for the Rams, making quick work of her opponent and winning, as well, in straight sets, by the score of 6-2, 6-2.

Nadia Rajan battled in the first set of her number three singles match. Ultimately winning before the tiebreak, 7-5 and easily taking the second set 6-2.

Head Coach Val Villucci, despite the tough start to the season, continued to see improvement in her team and is finally starting to see their practice pay off.

“Our doubles continue to improve,” said Villucci. “They were able to get us out of the hole that we started in, being short handed, and we have started to gain confidence and belief. We are taking that into the singles as well.”

Moving forward, Villucci believes in the competitiveness of this Rams squad.

“We just have to continue gaining confidence and belief because I know we can compete and win against some of the higher level teams,” said Villucci.

The Rams now look forward, as they have a double header this weekend, taking on both Hofstra and Sacred Heart on Saturday and Sunday at the tennis hall of fame in Newport, Rhode Island.