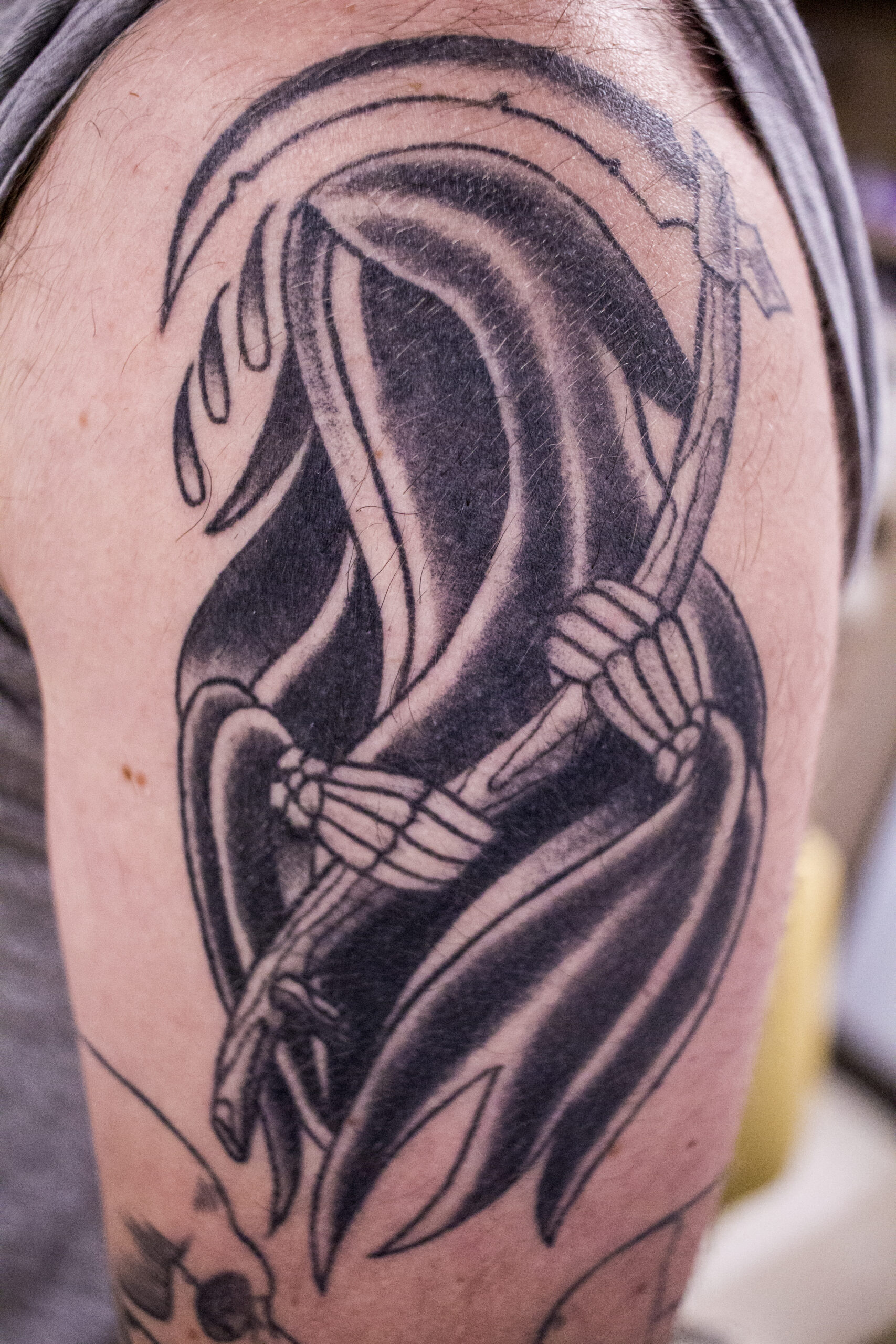 Student Chris Shaffer shows off his many tattoos. Photos by James McIntosh.

A picture may be worth a thousand words, but someone’s tattoos can tell who they are and what they want others to see.

One of Shaffer’s tattoos was inspired by the Pioneer space plaque, which is based on the Pioneer 10 and 11 aircrafts, which were the first two human-built objects to achieve escape velocity from the Solar System. The probes were launched for the purpose of space exploration.

“I always thought this was cool because [Pioneer 10 and 11] were put into space as a beckoning for intelligent life to try to decipher what it all means,” Shaffer said.

Shaffer’s interest in anthropology reflects on his tattoos and their level of significance. His interest in human life and death focuses on what his tattoos mean to him and the plans he has for possible future tattoos.

“It’s like evolution and everything dies,” Shaffer said. “It really just depends on how well it’s preserved.”

Shaffer definitely plans on getting more tattoos and his interest in what tattoos were like during the 1940s. He reflects on one of his tattoos on his right forearm and how it relates to this tradition.

“I went to get one of my tattoos done and it came out completely messed up,” he said. “My biggest advice top of the list is get what you want and find a good artist.”

Based on what Shaffer knows about getting a tattoo, he feels that a lot of people complain about where they might be getting them. He tries to convince himself that if others can go through with getting a tattoo then he can too, no matter the level of pain.

“I think my pain tolerance is average, ” Shaffer said. “If you can trust the artist I feel like you don’t even feel the pain.”

Shaffer began getting tattoos at the age of 19. With every tattoo he’s ever gotten, he’s waited between three to four months before getting another over the past three years. Sometimes he would even have multiple done in one session.

His brother and mother both have interest in the art of how a tattoo is made and are both interested in art in general. Shaffer was surrounded by an open mind environment which made deciding to get tattoos a lot easier for him.

“I took my brother when I got one of my tattoos done,” Shaffer said. “I also took my mom to one of my sessions. They are both artists in a way and they were both interested in the art.”

Shaffer’s overall experiences with tattoos are important ones to understand. He believes that people should get what they like and wants others to learn from his mistakes so others won’t me the same ones he has.

“I have never really met anyone who said no I don’t like that one or no I don’t like them in general,”  he said. “My mom cried when I got the grim reaper on my shoulder but people have been pretty cool with my tattoos.”