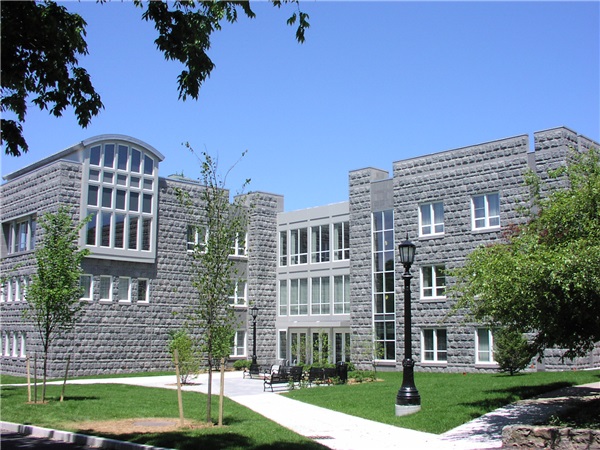 The College of Business, located in Ballentine Hall at the Kingston Campus, will undergo renovations funded by alumni donations. Photo courtesy of the University of Rhode Island.

University of Rhode Island alumni, S. Kent and Diane Fannon, gave $6 million to the College of Business for renovations and expansion of Ballentine Hall, as well as the development of a student success center.

The building renovation plan includes expanding the building’s south wing to create the new Kent and Diane Fannon Center for Student Success. According to Maling Ebrahimpour, dean of the College of Business, this center will offer academic advising, career advising and meetings with executives in residence. These executives are business professionals that help students find jobs and internships.

Ballentine’s entrance will also be completely renovated; it has not been renovated since 2002, when the south wing was first built during the remodel.

The Fannons are the first to give money towards the new renovations. However, it will cost approximately $17 million to expand the south wing alone, according to Ebrahimpour. He said that the timeline for the renovations will depend on support from other potential donors.

The Fannons’s gift comes at a time of economic uncertainty for many due to the COVID-19 pandemic. Ebrahimpour feels as if this shows the dedication of alumni to URI.

“[The gift] is going to have a major effect and impact in the future, regardless of what the situation is now,” Ebrahimpour said. “We are not looking at today; we’re looking at five years from now and 10 years from now. That’s part of the education people get in business. You plan for the future, not for now. People don’t come here for one day to get a degree, you plan for four years. When you graduate fully you have enough knowledge so that you can get a good job. This is happening right now but in three or four years, that’s when things will be improved.”

The timing of this gift is meaningful to the Fannons. They hope the gift will allow the College of Business to research and understand what is happening right now, so they can prepare for situations like this in the future.

“While there’s currently a high level of uncertainty and disruption, and we sympathize with students as to how this academic year is unlike any we ever experienced, we believe there will be a renewed focus on what’s important, what must be continued and what must be changed,” Diane Fannon said. “By acting now through this gift, we hope the University community will be even better positioned to respond in the immediate future, and we’d like to inspire others to make whatever commitment they can to the future leaders and innovators.”

“I’m most looking forward to our students getting the best job possible,” Ebrahimpour said. “That’s the ultimate goal. What I want is to create an environment for our students to get good jobs. That’s the number one priority. That’s why students are here. If it wasn’t for students, there wouldn’t be a university.”

Diane Fannon recently retired as principal at the Richards Group, an advertising agency in Dallas, Texas. Kent Fannon is semi-retired as a partner at Chartwell Partners, an executive search firm for high-level positions. They currently live in the Dallas-Fort Worth area, but Diane Fannon said that URI was the place that their story began. According to Diane Fannon, they have enjoyed giving back to URI since their student years. Kent and Diane Fannon first met during their sophomore year at WRIU, the on-campus radio station.

“We get a lot of satisfaction from our active participation with the College of Business, the URI Foundation and Alumni Engagement organization and have had the privilege of working with two URI presidents and their teams to navigate through the fiscally challenging early 2000s and now thrive over the last 10 years,” Diane Fannon said. “We’re very proud to be URI graduates.”

The Fannons have given to URI in the past including two endowed scholarships; one for a marketing major and another for an entrepreneurial management major.  They have also contributed to the College of Business Annual Fund, which was created to fund current-use needs and they founded the Kent and Diane Fannon Endowed Career Fund.

Brye Davis, a junior innovation and entrepreneurship major in the College of Business, said that she wishes more focus would go into reassessing the programs they already have than the physical building that hosts them. According to Davis, the economy is always changing, so the curriculum and staff should match that. She said she would also like to see more focus on entrepreneurial programs and possibly grants for student startups.

“Honestly education is not about the building, it’s about the quality,” Davis said. “There are lots of buildings on campus that are in dire need of work. Since the money was donated to the College of Business it makes sense that we keep the money for that college. But, I think that the building is in great working condition. It’s still fresh and in no way in disrepair. I think it works perfectly fine for now, and that that money could be better spent elsewhere. I would rather that money to be going for my courses.”