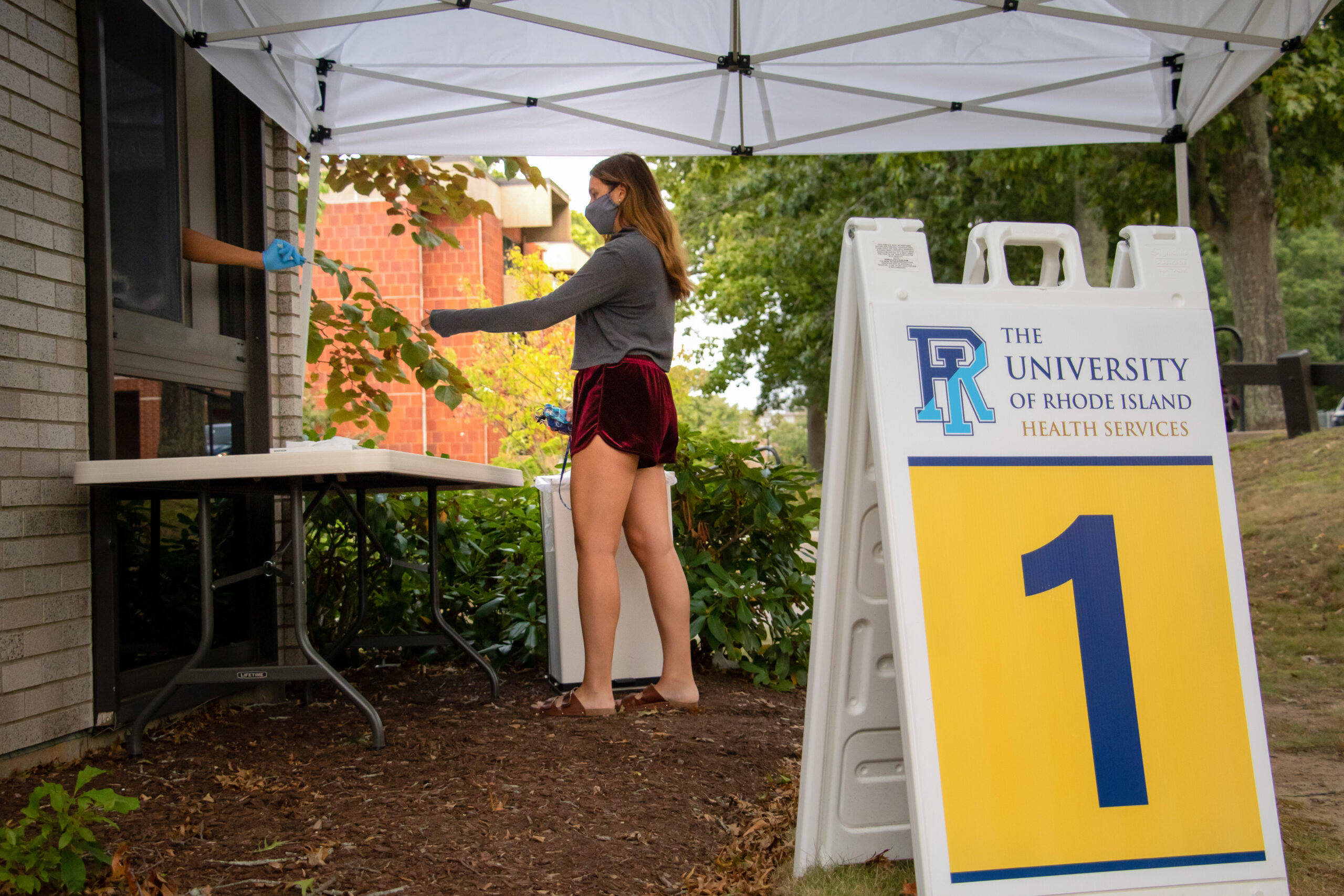 Student Kayla Michaud getting tested for COVID-19 at a tent set up outside Health Services. Photo by Siobhan Richards.

The University of Rhode Island COVID-19 fall testing plan includes testing for any symptomatic student, as well as random testing of 500 community members per week.

Any student who is symptomatic is able to get a test, according to Director of Health Services Ellen Reynolds. This includes students who live both on and off campus. She explained that any symptomatic students will make a telehealth appointment with one of the department’s physicians or nurse practitioners, who will evaluate the student and assess their symptoms. In most cases, the nurse who screens the student before the appointment will put them in for a test, she added.

Students who are asymptomatic and need testing for other reasons, such as employment, will be able to be tested as well, according to Reynolds.

Testing is being done outside on the south end of the Potter Building, where Health Services is located. When possible, the test is self-administered by the student. The student will peel open a package with a Q-tip-like swab and then put it roughly half an inch up each nostril, swirling it around three times and making sure to touch each side. This process is then repeated on the other nostril. Once the process is completed, the student zips it up into a bag and hands the bag back to the healthcare provider.

“[We’re] essentially adhering to the six foot physical distancing and the healthcare provider [is] wearing a mask and gloves,” Reynolds said, “[then] we’re passing along the test kit to the individual, and as long as they’re capable of doing it, [we’re] instructing them and observing them for self-collection.”

Test results will be rapid, according to Reynolds, but she said the University is very confident in their ability to produce accurate test results.

“We’re running an instrument in our laboratory that gives us a rapid result,” she said. “And so [the] same day, or hopefully before your telehealth appointment, the providers know that you’re positive or negative.”

The University has been working closely on the testing plan with the Rhode Island Department of Health, according to Vice President for Student Affairs Kathy Collins.

“As we worked on creating our testing plan, we did get feedback from the Department of Health regularly, which we appreciate,” said Collins. “We’re in constant communication with them. We can’t do it without them.”

“We had plan A, plan B, plan C and we’re now, like, on plan D,” she said, “we constantly have had to ‘pivot and adapt’ because the process of testing changed as more was revealed about the virus.”

Any student who tests positive, regardless of whether or not they are symptomatic, will immediately go into isolation, where they will remain for at least 10 days, the typical amount of time it takes for the virus to run its course.

“There’s nothing we can do about that,” said Reynolds, “we have to get you into a setting where we separate you from the public, and we make sure you recover well.”

A second test, called a polymerase chain reaction (PCR) test, is done for any student who tests negative. Those results come back in 10-24 hours. PCR tests detect the genetic material of the COVID-19 virus, whereas other tests look for proteins that make up the surface of the virus, according to the Texas Department of State Health Services.

Regardless of whether or not they test positive, any student who’s exhibiting symptoms and is symptomatic for COVID-19 will need to be moved into isolation, according to Reynolds.

Students who have tested negative and are in isolation could potentially get out earlier than 10 days if they return to their normal health.

The incubation period of the virus can be up to 14 days. Students coming from hotspots, or areas with a five percent positivity rate or higher, are required to quarantine for 14 days, as do students who have had close contact with someone who has tested positive. ‘Close contact’ is defined by the CDC as being within six feet of an infected individual for at least 15 minutes.

“It doesn’t matter if you’re masked or not, it’s the six-foot rule,” said Reynolds, “that’s why we’re asking for the six-foot rule because if not, all of the students who are congregating together for greater than 15 minutes, if one person tests positive, everyone else is going into quarantine for 14 days.”

Students are not able to test out of quarantine and must remain for the full 14 days.

An asymptomatic student testing negative requires no further action at that time, according to Reynolds, who added that those are “surveillance” tests.

Around 500 people will be tested per week as part of this “surveillance testing,” according to Reynolds. Roughly 75 percent will be students and the remainder will be faculty and staff. Individuals will be notified via email of this testing.

“We don’t require it,” said Reynolds of the surveillance testing. “It is an invitation, [we’re] not forcing anybody to participate, but most people want to be selected. They’re happy to be tested.”