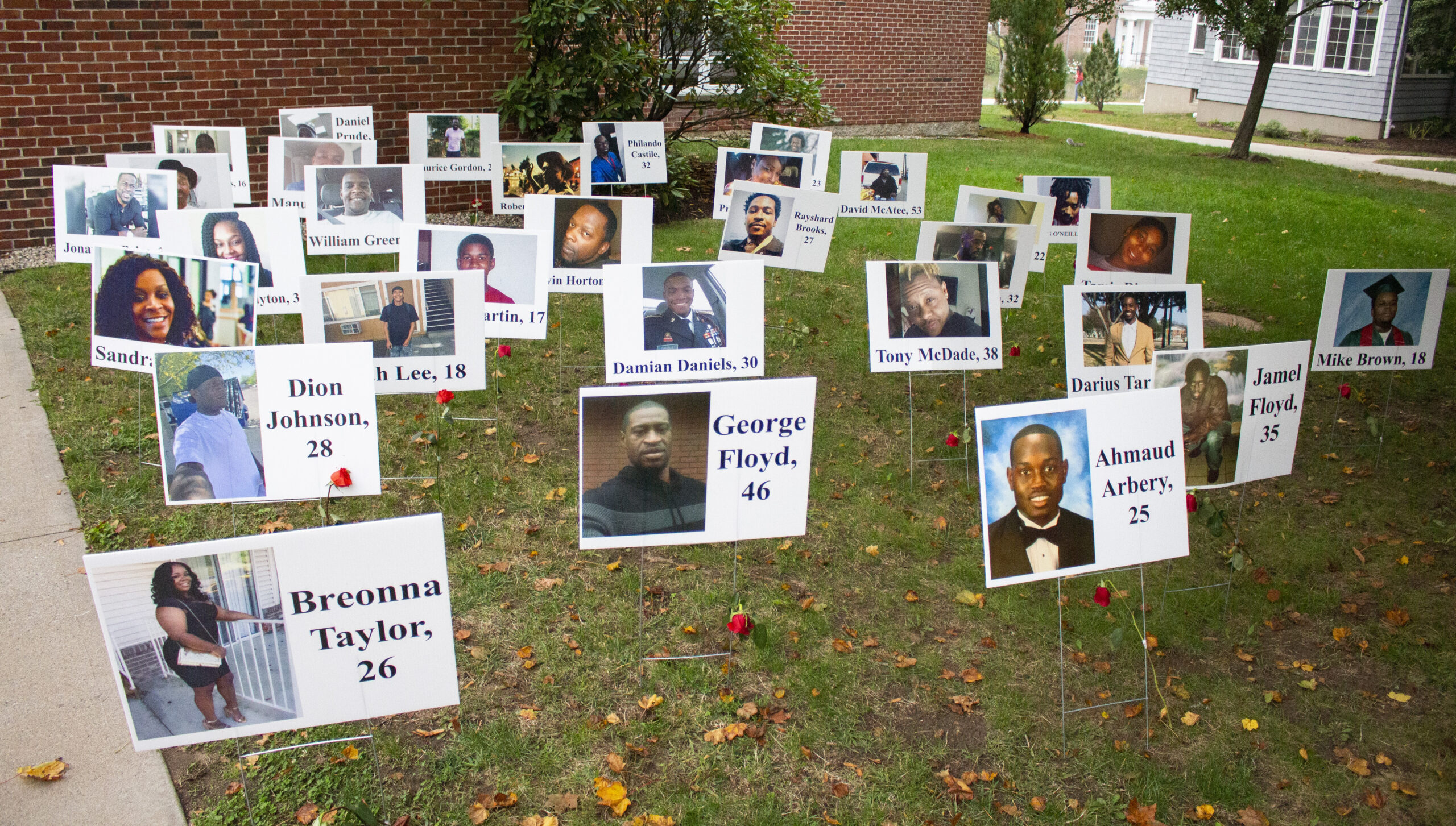 Memorial for Black police brutality victims outside of the Multicultural Student Services Center. Photos by James Singer and James McIntosh.

“Black Lives Matter every day, all day,” Leila Cox, president of the Black Student Union (BSU), said when she finished reading the names of Black victims of police brutality.

As Cox read out the names, attendees held out flaming candles, their eyes closed, some people visibly emotional. Once the names of all 31 victims were read, everyone blew out their candles.

BSU organized the event to be an evening full of unity, healing and speaking truth, and members of the organization took to the podium to share their own stories as well as read the stories of 24 victims whose lives were lost in 2020 alone. All 31 of the victims who Cox had listed were given signs with their picture and age outside of the MSSC to put a face to their names.

“If we were going to have only one event we wanted it to be this one,” the organization’s vice president Lucchina Breneville said. “I feel like going to a predominately-white institution like this, something like this needs to happen on this campus to wake people up. Black students at URI need to start feeling more seen, appreciated, like we’re a part of the University.”

Everyone in attendance was invited to step to the mic and say and share whatever they felt the need to, to speak their truth and attempt to heal.

Joshua Segui, the interim director of the MSSC, was the first person to speak, and his mission was to do just what Breneville had said she wanted: to make the Black students at URI feel like they had a safe space and like their pain, as well as their triumphs, were being recognized. There is a support system for them on campus, he said.

“Here at the MSSC, we will unapologetically say, without hesitation or trepidation, Black Lives Matter,” Segui said. “Hope will never die. No matter how violently oppressors thrash about, there will always be those who stand up and say no. The humanity of our community members is not up for debate. Empathy and community care is strength. Resistance is courage. We stand together shoulder to shoulder with our ancestors. We stand for justice.”

Having students then share their stories on the mic was one way to help the community feel more seen and heard. Markeem Rodrigues, BSU’s public relations co-chair was visibly emotional sharing a story about a time he was surrounded by eight cop cars, handcuffed and pushed down on the sidewalk. He went on to write about the experience in his college entrance essay, which he read for everyone in attendance.

“All I was guilty of [was] being Black on the affluent East side of Providence,” Rodrigues had written in his essay. “For all I knew I was going to be the next victim of police brutality.”

Community members could be seen comforting Rodrigues following his speech, one that he had said he didn’t feel comfortable sharing initially, but with everything going on in the nation, he felt a need to speak up that Sunday night.

Another student who spoke up was Naleen Camara, who echoed a sentiment shared by many others who spoke as they shared their own stories of fear for themselves, their friends, family and community members when it came to law enforcement.

Kaysha Sanon, BSU’s community service co-chair, shared the history of the policing and brutalization of Black bodies, from slavery to the prison industrial complex. She was not the only one to mention the growing movement to defund the police.

“This system is not broken,” Sanon said. “It is meant to oppress and discipline Black and Brown bodies.”

While there was much anger and sadness brought about from the community in attendance, there was also a sense of hope and unity that came from sharing the space, stories and flames in flickering candles. Students were given a forum and were heard, praised and cheered on and comforted in response.

It was clear that while there would be no end to the problems facing the Black community once the candles were blown out, it was also clear Black Lives Matter and the work of BSU and the MSSC would not end, and that the vigil was just a beginning.

“I’m so proud of the [BSU],” Cox said when ending the vigil “And all of the Black and Brown kids on this campus fighting every day, to be better, to be great. And I hope one day that we can all just be one and not fear for our lives.”