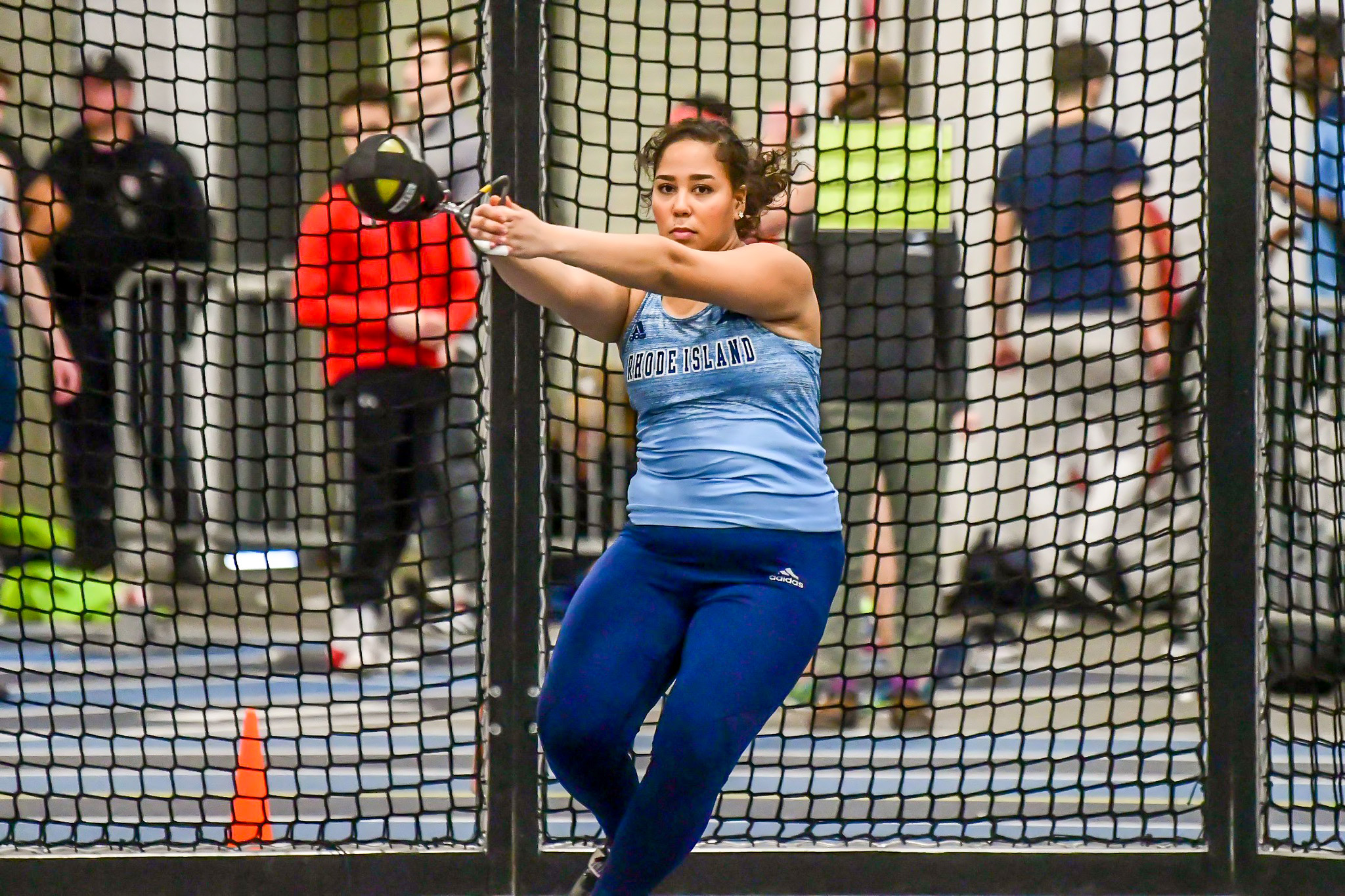 Track and Field athlete Noelya Delacruz successful on and off the field. Photo from GoRhody.

When talking about involvement and activity, you would be hard pressed to find someone who has more enthusiasm for life than University of Rhode Island track and field star Noelya Delacruz.

After a breakout 2019-20 campaign, the junior has quickly become one of the best throwers at URI, and even in the Atlantic 10 Conference. However, what sets Delacruz apart from her peers and opponents is her drive to succeed on and off the field.

Last season, Delacruz won the weight throw competition at the Brown Invite as well as the URI Coaches Tribute. Her progress compared to 2019 was tremendous, improving her weight throw by three meters (15.61m to 18.69m) and her shot-put by a half of a meter (12.01m to 12.39m).

In regards to whether or not she can continue that improvement in the upcoming 2020-21 season, Head Coach Laurie Feit-Melnick said, “The sky’s the limit for her after her huge improvement last year. She is one of the hardest workers we have and I have no doubt she will continue to improve this year.”

Delacruz’s excellence and hard work doesn’t stop on the field, as she puts a lot of focus into her studies. She is a kinesiology major on the applied exercise science track with the hopes of becoming an occupational therapist.

The road hasn’t always been a success for Delacruz though, as she cites numerous moments of adversity in high school and college as the reason she is where she is now.

“Growing up, I played softball for 14 years and I thought that was what I was going to do in college,” she said. “I actually tore my ACL, MCL and meniscus in my freshman year of high school. After that, I kind of lost my love for softball. Luckily, track was there for me.”

Delacruz would go on to use track and field as rehabilitation for her injury and began to notice that she had a love for the sport and possessed serious potential. She continued to focus her energy toward the classroom and the sport. Soon enough, Rhody came calling.

“I’m not going to lie, URI was never one of my top choices before I visited,” Delacruz said. “But when I visited, I felt like I was immediately at home.”

When she came to URI, once again, Delacruz dealt with adversity, calling her freshman year a “reality check off the field.” Being really attached to her family, and without a lot of direction, she found it hard to figure things out on her own.

Even though she had to make adjustments in the classroom, Delacruz had few struggles getting comfortable with her new team, who she said were so accepting. Since then, Delacruz has been a leader for the team, setting the example for how a student-athlete conducts themselves on and off the field.

“There is so much diversity on our team and it can be hard to fit in with so many different cultures but, I feel like she kind of acts like the bridge between coaches and players,” said Feit-Melnick. “When someone has an issue, Noelya has no problem bringing it up and that is where she shines as a leader.”

On top of all that she does for the team and in the classroom, Delacruz is also a part of PINK Women, an on-campus organization for women who strive for excellence both in and out of the classroom and fight against domestic violence and breast cancer among other important issues.

“Being around women who have the same determination to be great and devotion to each other and the community has really been inspiring,” said Delacruz. “I have a lot of gratitude for that organization because I know I will always have people who have my back.”

With the indoor season starting Feb. 27, Delacruz, Coach Feit-Melnick and the Rams will look to continue improving and striving for excellence on-and-off the field.