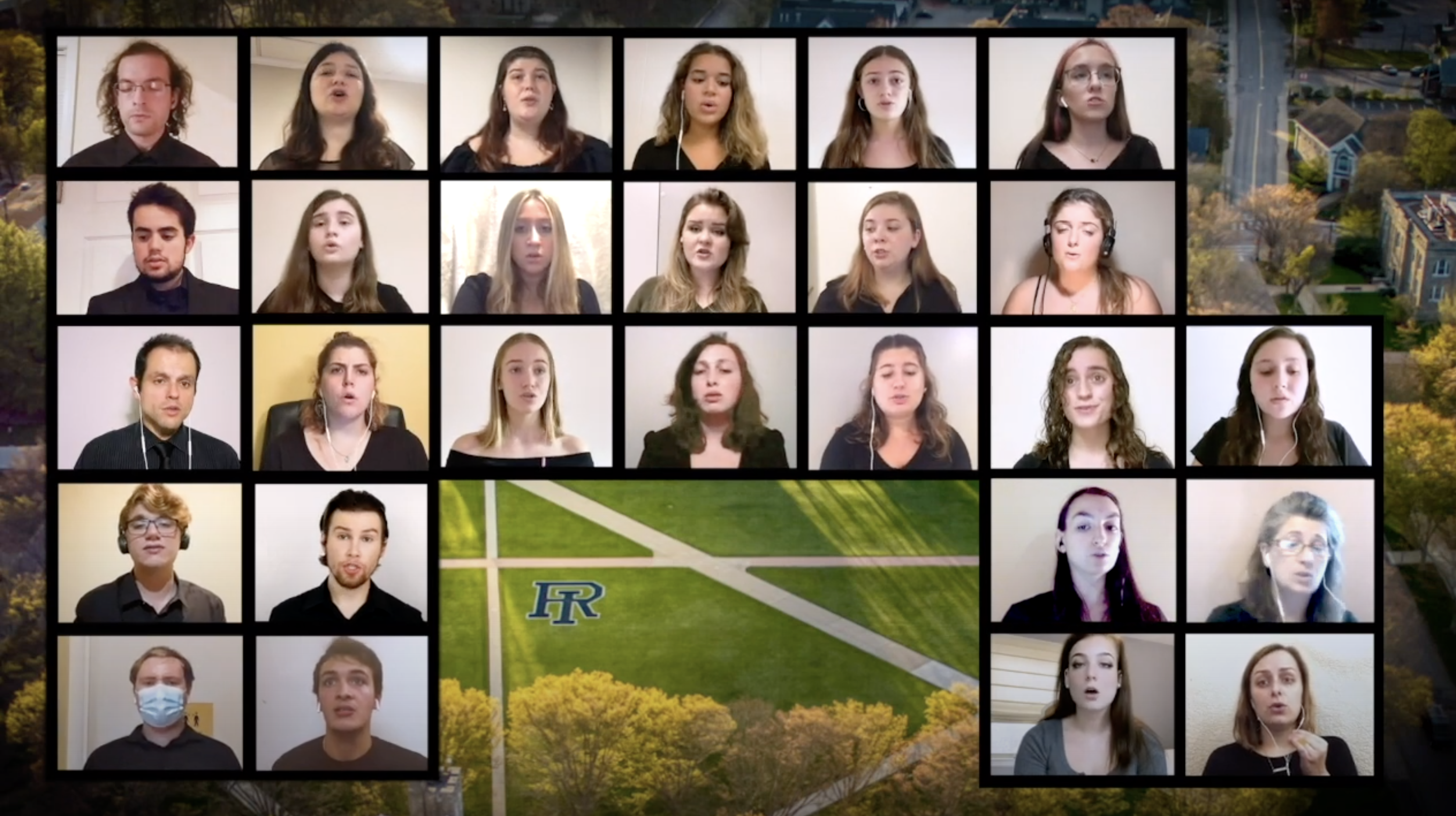 With COVID-19 curbing live events, the University of Rhode Island’s music department created a unique performance method in an effort to preserve normalcy for music students.

The Ram Jam Concert Series was first devised this past summer as state regulations called for a cease in large gatherings. Without the ability to congregate, Mark Conley, music department chair and voice professor, wondered how ensembles would perform for the public. URI’s new state-of-the-art recording equipment was put to the test as Conley pitched a virtual concert series to fulfil typical recitals.

Each week, videos of choral and instrumental groups are compiled into a singular video showcasing a variety of student musicians. The URI Music YouTube page posts these film collections for a virtual audience to enjoy.

Major requirements such as convocation and individual recitals, according to Conley, are still occurring live via Zoom, so students perform in an empty auditorium with their performance streamed. Exceptional performances, deemed as Performances of Merit, are nominated to be featured in the weekly Ram Jam production.

In addition to these performance videos, the compilation includes video clips and pictures of music classes to show how the department had to adapt during the pandemic. Some alterations being made include wearing masks while playing wind instruments as well as rehearsing outdoors to combat airborne transmission.

Conley and the music department team have turned to online platforms to start conversations about the concert series. Instagram, Twitter and Facebook are used to promote the weekly event, while YouTube is where the final product can be viewed. Additionally, the Ram Jam Concerts are posted to the URI website as well as the department page.

The URI Music channel gained over 100 subscribers after just the first week of posting concerts on YouTube. Conley believes that this traction can be attributed to the tremendous support which has been exhibited by the community and hopes that even more students will start to watch these videos.

“I think they’d be amazed at the variety of what is going on,” said Conley. “There are a lot of things that people maybe don’t know about, plus it’s just interesting for people to see how you make music during this time, because it is quite different.”

Variety is exactly what these videos aim to represent; from floutists to choirs to hip-hop violinists, the Ram Jam brings viewers a plethora of entertainment.

According to Conley, the outreach of these videos has increased exponentially. Each week, more and more viewers log on to watch the series.

Sophomore Caleb Hilyard is a music education major who specializes in saxophone. His first convocation performance was deemed a Performance of Merit and was featured in one of the Ram Jam productions. Hilyard not only feels fortunate to be included in the series, but he is grateful for the opportunity to watch his peers perform at his convenience.

“Sometimes it was hard to go to all of the live concerts, so it’s been great having the Ram Jam,” Hilyard said. “I’ll be able to hear one of the chorus performances or a recital on my own time which helps me watch more than I would normally.”

As the semester comes to a close, the music department plans to continue producing the Ram Jam up to the point when in-person concerts are permitted. Until then, students are urged to support their fellow URI pupils virtually and watch as the concert series unfolds.

Build a boat, ‘Will it float?’