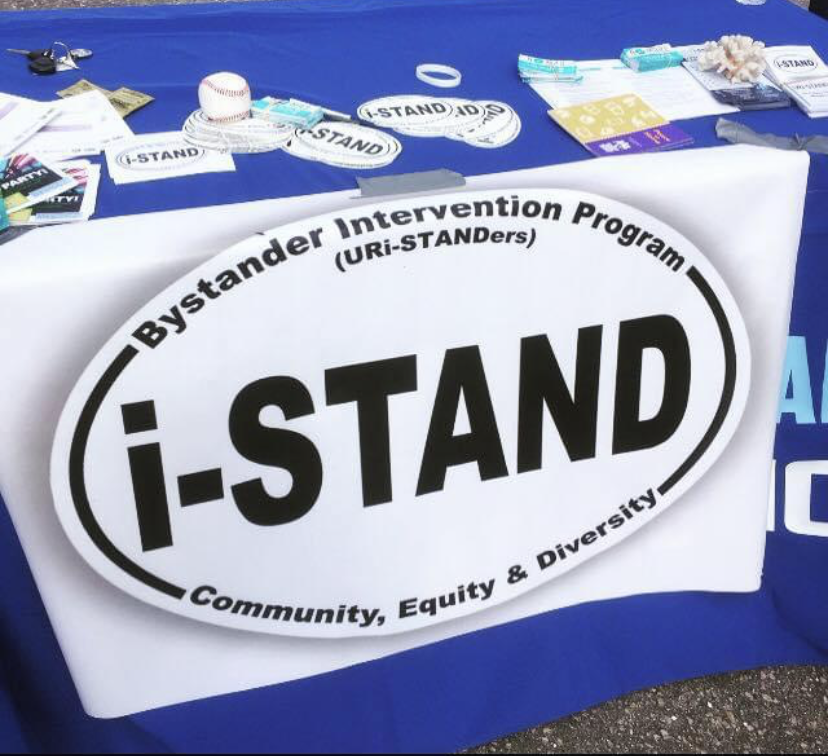 A booth for URi-STAND helps raise awareness about domestic and sexual violence. Photo contributed by URi-STAND.

Through presentations, workshops and community outreach, the University of Rhode Island’s Bystander Intervention Program of URi-STANDers encourages community members to take a proactive approach when witnessing sexual and domestic violence.

The team of URi-STANDers, led by Assistant Director of the Bystander Intervention Program Keith Labelle, works to educate the community on sexual and domestic violence. Students are encouraged to be “active bystanders” when they see such violence happening around them. Students involved take a three-credit training course and have the opportunity to apply to be a program intern.

The concept of bystander intervention stemmed from an incident in New York City in 1964 when a young woman named Kitty Genovese was murdered outside of her apartment building. Several neighbors heard her cries for help, yet none called the police, thinking that somebody else would.

“It’s a psychological concept that the more people who are present when something bad happens and a crime is committed, the less likely they are to intervene because there’s a diffusion of responsibility,” Labelle said. “It sounds like an oxymoron, [but] basically, it’s just to take responsibility.”

Labelle has been involved in sexual and domestic violence advocacy since his time as a student at URI in the early 2000s. The University received grant funding from the Violence Against Women Act to educate students about sexual violence prevention. He was involved with the program while he completed his graduate degree, and upon his graduation, he became the grant coordinator. Once the grant funding ran out, the University decided to institutionalize the program, which led to the creation of what is now known as Violence Prevention and Advocacy Services (VPAS).

After working at the Women’s Center for around 10 years post-graduation, Labelle started the Bystander Intervention Program from Violence Prevention and Advocacy Services. The goal was to help the community take a proactive, rather than reactive, approach to sexual violence, encouraging students to stand up and speak out against it.

Since then, over 300 students have taken the program’s training course, CSV 302: Community Service at URI and have become program interns. The class covers various topics related to sexual and domestic violence, including laws, different types of sexual assault, the portrayal of women in the media and international violence.

According to Labelle, sexual violence is not exclusive to any particular group.

“It affects not just women, it affects gender non-conforming folks, it affects men; it happens a lot more often than people realize,” Labelle said. “It’s just not as talked about.”

The sensitive nature of the class and its discussion material operate better with in-person instruction, according to Labelle, who taught the class in person this semester. The class size this semester is smaller than it has been in the past, but the coursework has largely remained the same, with students sharing their own experiences and what they’ve learned from the course as well as what they’ve learned from one another.

“Once you learn the real numbers about things like the fact that [most] people that are raped are raped by somebody that they know and that they trust and that they care about, you start to see the world a lot differently,” said current CSV 302 student Shawn Gibbs. “We’re learning about tons of issues that are happening everywhere all the time, but most people don’t really talk about them that much.”

Students who complete the class and become interns are able to tailor their internship to their skill set so that they can get the most out of the program, Labelle said.

Sophomore communications major Hannah Bachert has been able to give virtual presentations this semester to members of the Greek community and student athletes as a URi-STANDer. After watching a presentation on sexual violence prevention from Labelle for the rowing team, as mandated by the NCAA, she was inspired to join the program. Bachert is in her second semester as an intern, and before the pandemic, she also helped organize informational booths in the Memorial Union and other events.

Bachert said that some of the skills she’s gained are organization, presentation, turning an idea into a finished product and speaking with people about difficult topics.

Students in the program are able to see the impact that their work has on themselves, as well as on the community as a whole.

URi-STANDer Emma Grace Pecha, who graduated last spring, recalled a time where she saw people she had given presentations to at a party. The program discusses using tactics to intervene in a situation where an assault could happen such as the three D’s: direct, delegate, and distract. She saw these people stepping in to help complete strangers in situations where they were at risk.

Labelle, Gibbs, Bachert and Pecha know how difficult it is to talk about these topics, yet they said that’s exactly why people should join.

“These are two topics that are incredibly uncomfortable to talk about, but they happen and you don’t know who’s going to be a victim of it,” said Pecha, “I think people should join this program because it’s uncomfortable, but people need to know. It’s an epidemic that a lot of people aren’t talking about.”