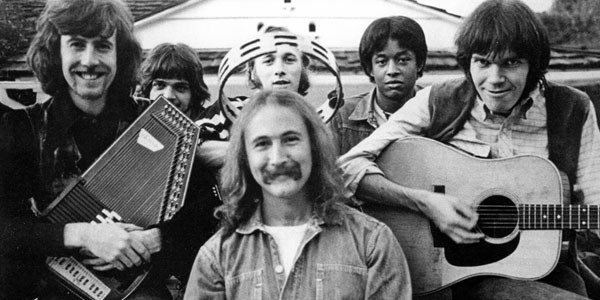 “Deja Vu” was released in 1970 by Crosby, Stills, Nash & Young. Photo from Cinemabland.com.

“Deja Vu” is the 1970 debut album of folk-rock supergroup Crosby, Stills, Nash & Young following Neil Young’s addition to the established trio. It features some of their greatest hits and some of my favorite folk songs ever. This album is special to me as it was one of the first vinyl records I ever played, and sparked my love for collecting vinyl albums.

The album opens with “Carry On,” an empowering rock song featuring great guitar and an energizing beat change roughly halfway through. “Woodstock” is another great classic rock track featuring the group’s incredible talent for perfect harmonization. Their vocals combined with the strong guitar and accompanying piano create a great blues-inspired sound that helped this song climb the charts around the globe. “Country Girl” is my personal favorite song on this album; on this powerful track, Young expresses his feelings for a girl that he can never have. These feelings build throughout the song which culminate in a final crescendo of emotions, piano, guitar and harmonica.

“Teach Your Children” is a sentimental folk track featuring the legendary Jerry Garcia of the Grateful Dead on steel guitar. “Almost Cut My Hair” is a bluesy rock track that features incredible guitar from Stephen Stills and Young, as well as sad lyrics and vocals from Stills. “Helpless” is a song filled with sorrow as Young expresses his feelings of powerlessness and great sadness during this tough time in his life. The combination of piano, guitar and Young’s vocals give this song an incredibly melancholy feel to it.

“Our House” is a soft pop rock song that remains one of the most popular tracks on this entire album. It’s lighthearted, fun and clearly well received it’s audience, peaking at No. 30 on the Billboard Hot 100 in the United States. “Everybody I Love You” is a bright, folk-rock track filled with great guitar riffs and the group’s signature harmonization.

The album’s title track “Deja Vu” opens with some interesting scatting, and then explodes with powerful staccato vocals and more incredible harmonies. “4+20” is one of the most unique songs on this album as it only features Stills’ vocals without the usual powerful harmonies of the other members. This is a calm folk song that is relaxing yet entertaining.

While short lived as a quartet, Crosby, Stills, Nash & Young created some of the most influential music of their times.

Everybody I Love You

Final Thoughts: “Deja Vu” is a fantastic journey through the sounds of the late 60s and early 70s. There is a special nostalgic and sentimental aspect to the entire album, and I highly recommend it to any fans of folk and classic rock.

We’re taking recommendations for movies, shows and music for me to review!

Reach out to us on twitter: Ronan Himelrick at @ronanrhodycigar or the entertainment section at @URICigarEnt