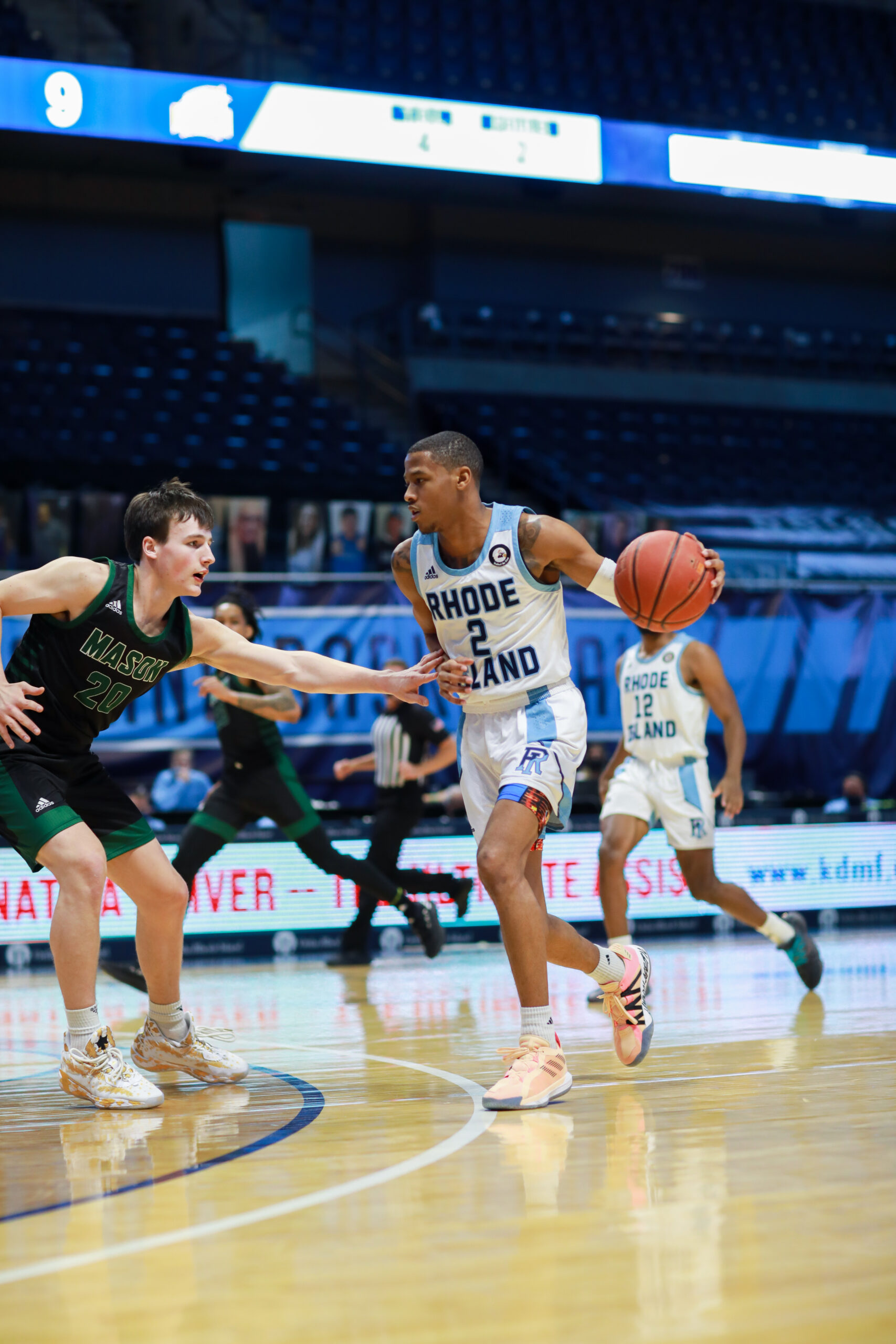 The University of Rhode Island Men’s Basketball team took down Atlantic 10 foe George Mason at the Ryan Center, winning by a score of 80-60 thanks to a balanced effort on the offensive end from the Rams and a 46-26 explosion in the second half.

The Rams struggled to find an offensive rhythm early as the Patriots jumped out to a 16-5 lead seven minutes into the game. George Mason’s leading scorer, junior Jordan Miller, hit four threes for the Patriots and scored 14 of his game-high 22 points in the first half.

Once again, the Rams were able to dig themselves out of a double-digit hole, coming back from 11 in the first half after making up a 15-point deficit on Wednesday. Antwan Walker’s play, as well as key baskets from senior Fatts Russell and junior Malik Martin, allowed for the Rams to keep the deficit manageable before they went on a 12-3 run to end the half, tying the score at 34 at the break.

The Rams were able to carry that offensive momentum into the second half despite struggles from beyond the arc. Walker and Russell led the way for the Rams offensively, seemingly getting to the basket at will. The Rams were also able to speed up the pace of the game, turning defense into offense with transition scores from Walker, Martin, and junior D.J. Johnson.

The Rams continued to keep their foot on the gas as the second half progressed, going up by 15 before the Patriots began fouling. Free throw makes from Russell and sophomore big man Makhel Mitchell helped extend the Ram lead and close out the contest, with the final score being 80-60 in favor of the Rams.

It was another standout statistical performance from Russell, who led the team in scoring with 18 points and an impressive three of five from beyond the arc. He showed his defensive prowess as well, collecting two steals and becoming second all-time at Rhode Island in career steals. He is just seven away from the all-time lead.

Walker finished with 17 points and nine rebounds on 8 of 15 shooting for the night. Mitchell also continued his offensive breakout, racking up 14 points to go along with 10 rebounds and a season-high eight makes from 13 attempts at the free throw line.

Russell gave credit to the team’s chemistry and resiliency when talking about the ability to bounce back from an early deficit.

”We are the best of friends off the court,” he said. “We have to work on starting stronger so we don’t put ourselves in a hole, but I know my brothers have my back and we know how good we can be when we click.”

The offense was the catalyst in today’s win as the Rams looked fluid, sharing the ball and getting it to the basket for easy looks at will. They were also able to limit their turnovers from nine in the first half to just in the second. That brought their game total down from 20 against UMass to 12 against George Mason.

Head Coach David Cox said he and his staff worked a lot over the last few weeks for how the teams can limit turnovers, and he is optimistic about what the improvement could lead to.

”I have been trying to show them how to improve with their ball security,” he said. “We started to figure it out today and hopefully we can show them what they did right. We have a lot of firepower. If we can limit wasted opportunities then we can be really hard to beat.”

The Rams will look to build on today’s win as they hit the road for their next game as they play Duquesne at the Kerr Fitness Center on Wednesday.