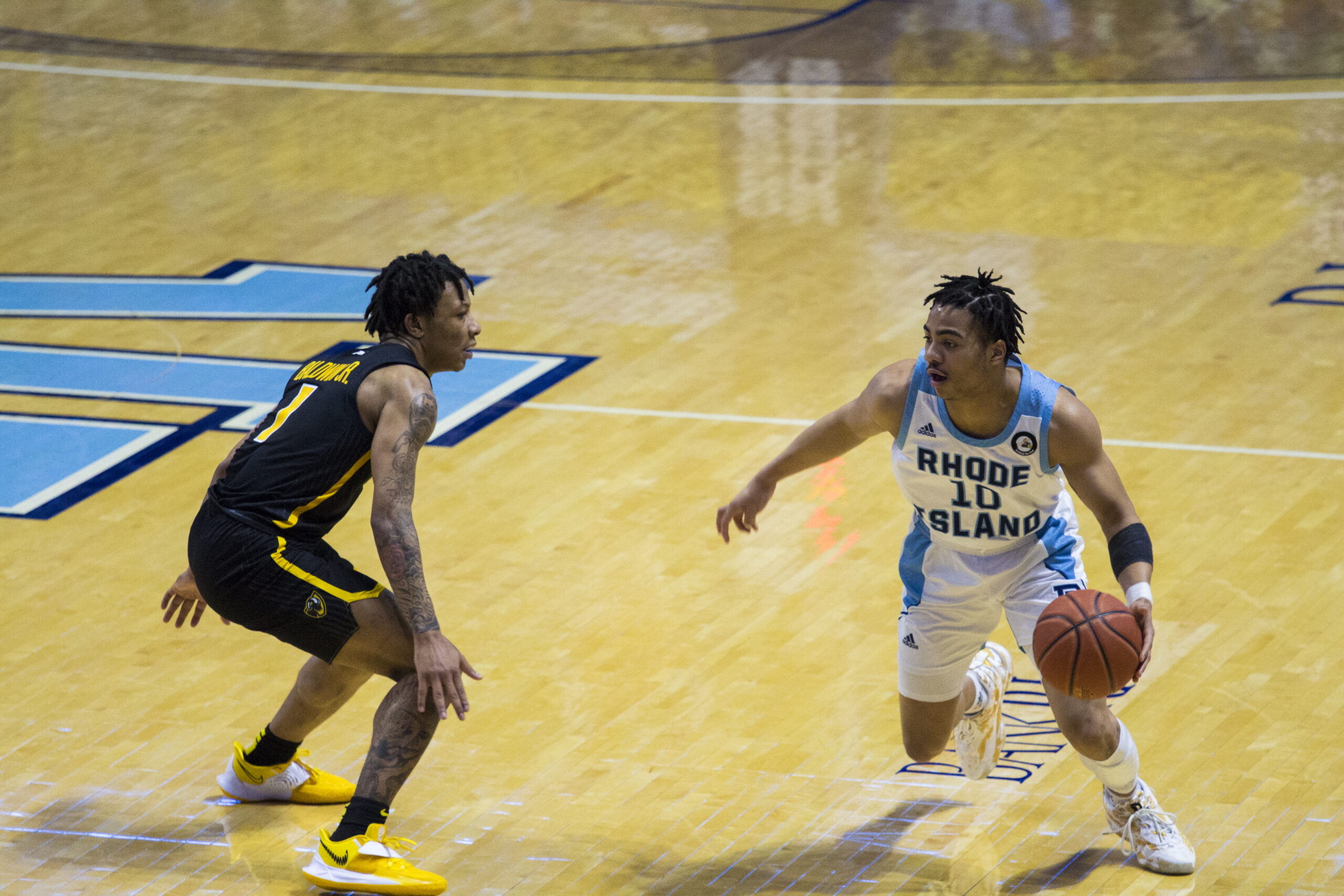 In a close game, the URI Men’s Basketball team was defeated by VCU by 1 point. Photos by James Singer.

The epitome of brutality, as CBS Sports’ Jon Rothstein would say.

Up by as much as 10 in the second half, it looked like the University of Rhode Island’s Men’s Basketball team would secure its fourth-straight victory against VCU, but instead, they were shell-shocked after VCU guard Nah’Shon “Bones” Hyland knocked down the game-winning three with five seconds remaining to give the visiting Rams a 63-62 victory.

The victory marks the first time that VCU has won inside the Ryan Center since 2015. With the defeat, Rhody dropped to 9-10 on the season and 6-6 in conference play.

URI had one final chance to retake the lead after Hyland’s three when freshmen Ishmael Leggett drew a foul with 1.6 seconds remaining. At the free throw line with a one-and-one, Leggett front-ended the first free throw and Hason Ward secured the rebound and the win for VCU.

“I thought we showed a lot of fight, a lot of resiliency, a lot of togetherness tonight, but we came up short,” said Head Coach David Cox. “No moral victories. We’ll have to reset and get ready for the next opponent.”

Despite the disappointing ending, Coach Cox took some time post-game to praise the freshman, who scored a team-high 17 points and started in place of Fatts Russell, who was out due to an ankle injury.

“We love him,” Cox said on Legett. “He’s a soldier. Without his defense on Bones [Hyland], we wouldn’t have been in that place at all. He’s absolutely crushed as if he lost us the national championship game, but that’s who he is. He’s a winner.”

Similar to the second half of the Dayton game on Saturday, turnovers paralyzed Rhody’s ability to get anything going offensively early on. After turning the ball over 10 times in the first half, Rhody finally found their offensive rhythm early in the second half. The team would hit seven of their first 14 shots of the half to take a 45-35 lead with 13:26 remaining in the game.

VCU would switch to a 2-3 zone and Rhody would soon go cold. The visitors ripped off a 12-2 run and held Rhody to one made field goal in six minutes to take a 53-50 lead with 5:18 remaining in the game.

Rhody was able to recover to take a four-point lead with under a minute to play, but two Hason Ward free throws and Hyland’s late game triple would prove to be the dagger.

Hyland led all scorers with a game-high 23 points with 18 of those points coming in the second half. He was followed by Levi Stockard III, who finished with 15 points. Jeremy Sheppard also finished with 13 points and six assists in 40 minutes for URI.

The Rams return to the court Saturday to face the UMass Minutemen in a rematch of their Jan. 13 overtime thriller in Amherst. Tip off is scheduled for 8 p.m.