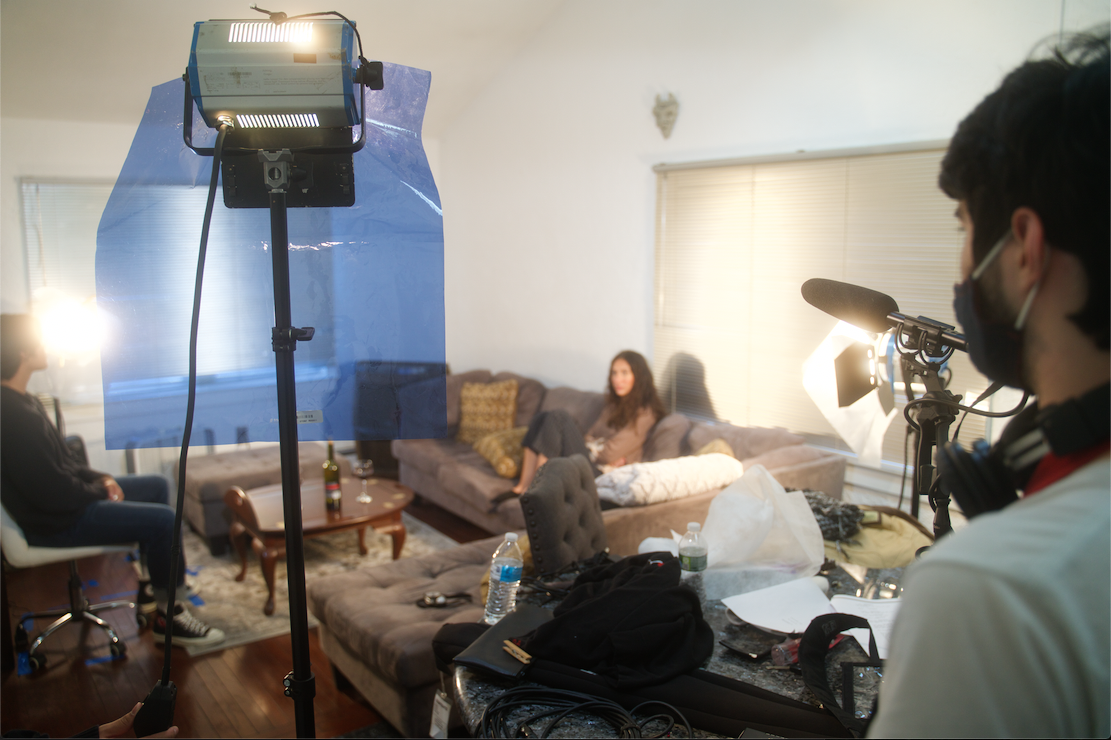 Despite the issues posed by the pandemic, URI film students are still persevering in their studies. Photo by Ethan Pellegrino.

One of the final courses film students take at the University of Rhode Island requires them to direct their own film, and many students are determined to make their final projects a reality despite the pandemic.

Chris Hetu is a senior double majoring in communication and film. A transfer from the Community College of Rhode Island, Hetu was unsure of what major to pursue in college. It was after watching a movie that Hetu got inspired to become a film student.

“I was just in the library one day, and I think I watched a movie the night before and I was just like ‘what if I wrote a movie?’” Hetu said. “Then I ended up writing a 60-page script in three months.”

Pre-pandemic, film students would pitch their idea to their professor and that was the only approval needed to begin their project. However, now there are many more steps needed to be taken before a project can begin, revolving around the University’s risk management department.

“Now we have to also talk to risk management,” said Hetu. “Risk management plays a deep role, and we’ve learned to adapt with them because, for the most part, it’s getting them to approve the movie and say yes.”

Film students now must create a “COVID-19 plan” that will be enforced when filming that way participants can remain safe on set.

The new COVID-19 safety standards set in place for film students have limited what they can film and produce. Simple things like close-ups are now nearly impossible to include in a project because there is now a required distance between the actors and the camera; if an actor has their mask off, the camera has to be 14 feet away.

“If there were like 10 hoops maybe you had to pass through to film for URI, there is now double, maybe triple the amount of hoops,” said Audrey Hammond, a senior double majoring in film and fine arts with a minor in business of digital media.

Current film students are not the only ones who have been affected by the pandemic. Julia Madden, a graduate student as of December who  double majored in film and psychology, faced many challenges during her final semester. She had been working on her demo reel, essentially a film version of a resume, and was really concerned about how it would affect her graduation.

Professors have been, in Madden’s own words “going back and forth,” about letting alumni request equipment and film for their demo reel in the summer. However, due to the pandemic carrying over into the summer, that was not possible. Madden is still without a demo reel, but since her graduation has been doing some small editing jobs, as well as making connections with professionals in the film industry.

The URI film department and students are probably some of the most affected by the COVID-19 pandemic in terms of curriculum. Now, while there are many more obstacles film students must face in order to create their projects, students are still determined to get out into the world and film their stories.

“Just take the precautions, just do what you can, be confident in your work, and just know who you are because at the end of the day your work is you,” said Hetu. “That’s what you want the world to see, so if you want your message heard, just go out and make your movie.”