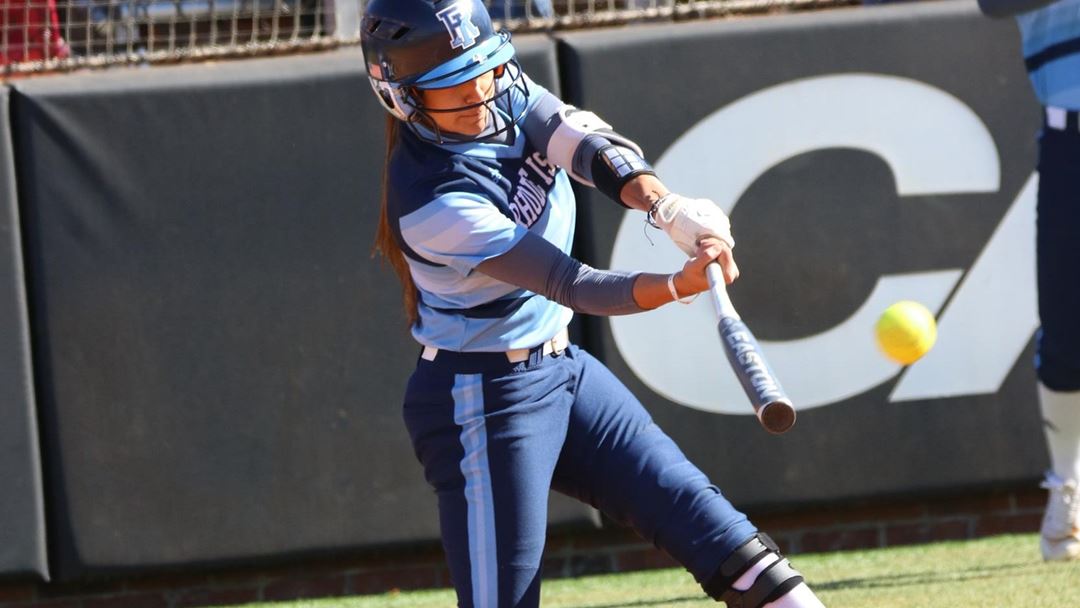 The URI Softball Team was brutally defeated 1-17 vs. Elon. Photo from GoRhody.com.

The University of Rhode Island’s Softball team opened up its season on Sunday in North Carolina, falling 17-1 to Elon in their first game in over 11 months.

The two teams were originally set to play a four-game series, with two games each on the weekend. The back-to-back games scheduled for Saturday were cancelled because of inclement weather, along with the second game of Sunday’s doubleheader. Even though URI was only able to play one of a potential four games this weekend, Head Coach Bridget Hurlman said it was “awesome” to be able to get on the field after they drove down to North Carolina last Thursday

“We would have liked to have been able to get out there, have a couple more games, see the squad put it together, have people get over some of their first-game jitters and really just settle in,” Coach Hurlman said.

In the leadoff spot for the Rams, junior Sami Villareal went 2-for-3 with a double and a single. Redshirt senior Erica Robles hit a single in the top of the third to score Villareal for Rhode Island’s only run, and the game was finalized after the fifth inning because of the eight-run rule.

With Rhody playing its first game since last year, Coach Hurlman said it was exhilarating to see the team compete after such a long hiatus. In preparation for the spring season, she said the team has tried to do the best it can with the resources it has and the scenarios being presented.

Pertaining to the new COVID-19 guidelines in place, Coach Hurlman said the atmosphere on gameday was a “little bit different.”

“It affects [the team] the most in the dugout,” she said. “There’s only 14 [people] allowed in the dugout, so we had to spread down the line in some seats and some bleachers.”

Players are not required to wear masks while in play, but the corner infielders will wear them if there are runners on first or third base, according to Coach Hurlman. She said there is a general consensus that everyone is outside and a fair enough distance away so masks do not have to be worn at all times.

For Elon, freshman Grace Kiser granted the Phoenix an early lead with a three-run home run to left-center with two outs in the bottom of the first. With another three-run shot in the fourth, she finished the game with six RBIs.

In the upcoming weeks, URI has a doubleheader against Sacred Heart University in Fairfield, Connecticut, along with another set of back-to-back games the next day against the University of Delaware in Newark, Delaware. Although the result of Sunday’s game was not ideal, Coach Hurlman said there were some “bright spots” in certain areas, and it felt great to coach and compete one more.