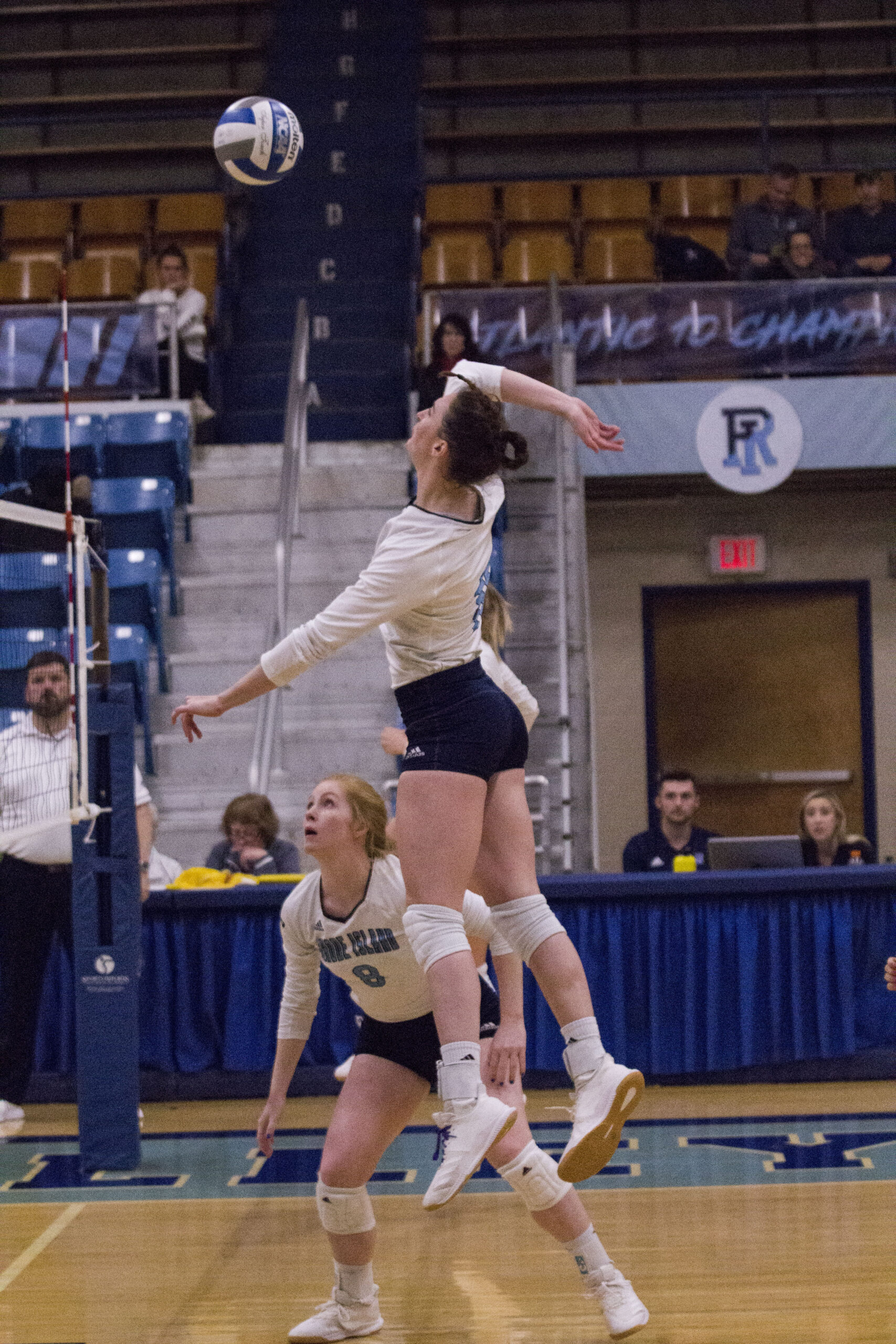 After 455 days with no matches, the University of Rhode Island Women’s Volleyball Team was eager to get on the court with two matches against George Mason on Valentine’s Day weekend to open up their season.

“It’s amazing to be back out here; I’m so happy and grateful to be back,” senior Claire Chaplinsky said.

The Rams started their season on Saturday afternoon against the Patriots leading 18-10 as a result of senior Annie Eli’s 10-point serving run. Both sides went back-and-forth the rest of the first set, with URI pulling out a 25-18 first set win, ended by a freshman Samantha Blahut kill.

Rhody came out hot in the second set with kills from Chaplinsky and Mariah Paulette making the score 3-0. George Mason bounced back and kept the game close until they took the lead, forcing Head Coach Nicki Holmes to call a timeout at 23-20. In extra points, the Rams fell to the Patriots 26-24.

Energized by the second set loss, the Rams started the third set with an 8-2 lead, which led to a Patriot timeout. Following the timeout, George Mason went on a small run but was quickly stopped and followed by a seven-point service run by the Rams. A big block by Blahut led to another timeout by the Patriots, with a score of 17-7. This set was ended by an over serve by the Patriots with a score of 25-13 for the home team.

The Rams got another strong start in the fourth set with a 7-2 score. With another strong Rhody run, George Mason called a timeout with a score of 12-6 to try to recoup. This timeout proved successful as George Mason earned six points. With tied scores at 21-21 and 23-23, the Patriots took the win with a final score of 25-23.

Heading into the last set, senior setter Annie Ell scored the first point with a dump to the middle of the court. After a tough fight from both sides of the court, George Mason came out superior with a score of 10-15.

Despite the loss, Coach Holmes, who for the first time coached the Rams in live action, remains excited for the future of the program.

“I’m proud of the effort,” Coach Holmes said on Saturday. “I think they did really well. Obviously we are disappointed with scores but I think there is a really great future.”

Less than 24 hours later, a rematch between the Rams and Patriots took place in Keaney Gymnasium. The Rams got their revenge, and had a 3-0 sweep against their Atlantic-10 foe.

The Rams earned a 12-4 lead in the first set with huge defensive contributions from the front row, putting pressure on the Geroge Mason offense. Junior Gabrielle Shilling had two kills at the end of the set shutting down the George Mason defense and resulting in a URI win with a score of 25-8.

George Mason competed in the second set with many ties and leads. URI defense was stellar in this set with saves from Ella Ratzloff and consistency from Chaplinskly. This led Rhode Island to win the set 25-21.

The last set started with a quick Rhode Island lead of 7-2. Big plays by middle-hitter Schilling and setter Ell led Rhody to a landslide win of 25-14 and a sweep of 3-0.

URI had their first four games of the season cancelled as a result of a positive COVID-19 test in the program. A home and home series with the University of Connecticut followed by two games away to Northeastern were supposed to be the start of the Nicki Holmes-era in Kingston, but those plans were erased due to health and safety protocols. The extended pause made Ell excited about the team’s first win of the season.

“It was tough to come into our first match yesterday in over a year and lose,” Ell said. “It just feels amazing to know that I got to [win] with my team because we’ve been working so hard.”

Through two games on the season, Chaplinsky leads the team in kills with 28, followed by Paulette with 21. Ratzloff continues to impact the floor on the defensive end for the Rams with 29 digs. The junior from Woodbury, Minnesota had 482 digs last season, which led the team by a large margin, and set the school record for most digs in a single game with 42 against Fordham.

Coach Holmes was impressed by both his team and his coaching staff following the win.

“I’m so happy for them,” he said. “It is hard to bounce back less than 24 hours and try to do something. I’m really proud of my staff and the effort for the weekend. Watching them work for each other is a bright shining part of my day today.”

Up next for the Rams is a matchup at Providence College to face the Friars on Feb. 22 at 5 p.m.

Excitement builds as A-10 tournament tips-off